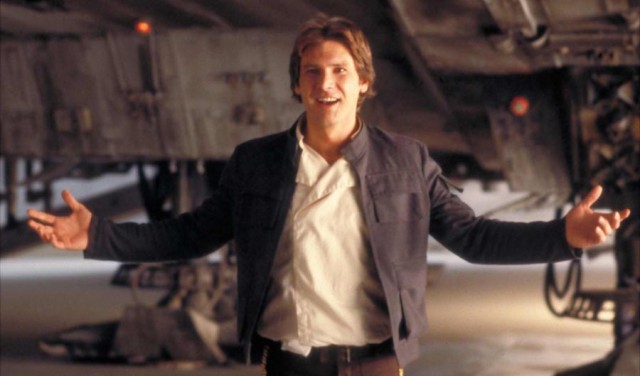 Don’t count all your womp rats before they’re bagged, Han. It’s only a rumor!

A long time ago in a galaxy far, far away, we were promised that with the advent of a brand new Star Wars trilogy released every two years from Disney/Lucasfilm, we would also be getting several spinoff films, featuring non-central characters or the backstories of main characters, to fill those Star Wars-empty years in between. With The Force Awakens solidly into production, fans across the globe await the reveal of the subject of those announced spinoffs, which at this point could be anything from a Boba Fett solo film to the story of Han Solo’s life before he ran into an old mystic and a farm boy in a Tatooine bar and agreed to take them to Alderaan.

So while we wait, Making Star Wars.net thinks they’ve got a handle on what’s up next, and it involves Breaking Bad‘s Aaron Paul.

A code name for the production is: Luminac Industrial Goods. They go on to say there’s going to be a really interesting situation at Pinewood Studios: The filming will eventually overlap with some of Star Wars: Episode VIII. Who are they hearing the film is about? Han Solo. They went on to say the word around the current production at Pinewood is that Aaron Paul is looking to be attached to the first Star Wars spin-off film.

If Han Solo: 10 Things I Know About Parsecs (Alternate titles include Han Duo, Flying Solo, and When Wookiee Met Sally) does wind up overlapping with the filming of The Force Awakens, we can probably expect a casting announcement on it sooner rather than later. But we probably shouldn’t expect that Aaron Paul will be playing the younger version of the original Captain Tightpants. MSW.net says that their source simply has heard that he’ll be involved somehow, not necessarily in the lead. If anything in their information is true, I’d guess this is.

For one, even with Hollywood casting of teenagers, Paul is a little old to play a young Han Solo. For another, it’s much, much more likely that any new lead actor or actress on a Star Wars film is going to be someone that either no one or only film buffs have heard of prior to the casting announcement. Case in point: John Boyega and Daisy Ridley.