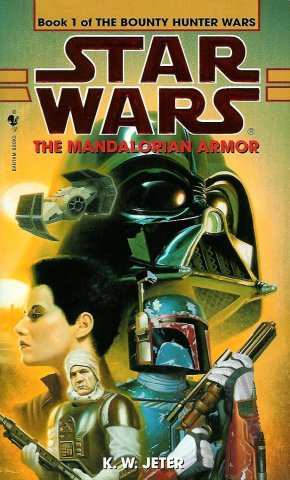 Just days after Lucasfilm put out an official statement saying that they’ll be making a clean break from the Expanded Universe with their new set of Star Wars movies, rumors are surfacing that they’re struggling to come up with a plot for their intended Boba Fett spin-off film. Hmmm, too bad Fett never shows up in any of the EU– oh, wait.

According to a reported rumor from /Film, the problem isn’t necessarily in coming up with something for Boba Fett to do: it’s in making him the protagonist of a movie while maintaining his original trilogy “bad guy” status. A fly on the wall over at MakingStarWars.net apparently heard a conversation between two executives that included the following (paraphrased):

Lucasfilm wants Boba Fett to remain menacing and scary but we have to make him the hero of the film and it is a real challenge.

Is it, though? I mean, come on. Boba Fett isn’t popular because he’s such an integral characters in the films. He’s popular because he has a super cool set of Mandalorian armor that made a lot of people want to write books about him. And sure, not all of those books are great, but a lot of them deal with this exact problem: making a character who’s technically aligned himself with the Dark Side of the Force into a compelling anti-hero with his own set of ethics and goals.

If Disney did decide to go back to the Expanded Universe for material, they’d certainly have a lot to work with. If they wanted to do the whole “escape the sarlacc pit” thing, they could model a series of Fett films on the Bounty Hunter Wars trilogy, which depicts him fighting against the Bounty Hunter Guild during the events of Return of the Jedi. Then there’s the pre-Clone War Blood Ties Jango and Boba Fett team-up comic book that you could probably pull some good ideas from.

Of course, we suspect that Disney will figure out a way to turn Boba Fett into a sympathetic character so they can squeeze every last drop of money they can out of him,  (After all, isn’t that what they’re doing with Maleficent?) and that all this hemming and hawing we’re hearing about is just a form of growing pains. We just worry that they might be missing the Forest Moon of Endor for its trees here. Yes, Boba Fett is pretty boring and generically “evil” in cannon. That doesn’t mean that there isn’t plenty of room for development.

(via Uproxxx and IGN, image via The Mandalorian Armor)