So What’s Really Going on With “Dark Rey” in the New Star Wars: The Rise of Skywalker Footage? 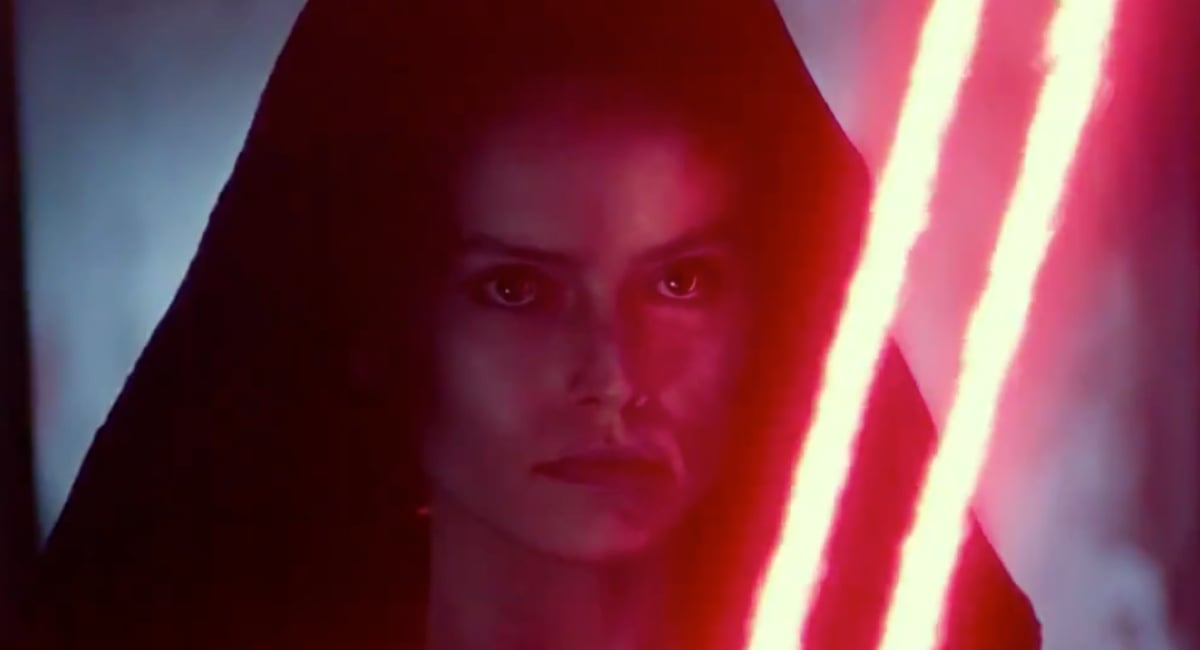 Disney finally released the sizzle reel for Star Wars: The Rise of Skywalker after two torturous days of waiting, and it’ll bring a tear to your eye. The reel celebrates all eight released Skywalker Saga films while teasing the upcoming release, ending with a killer shot that’s sure to send the Internet into a tizzy. Could Rey, our beloved heroine, be turning to the Dark Side?

Short answer: no, probably not. Rey is the idol of countless young girls who get to grow up in a world where a female Jedi leads a Star Wars trilogy. To have Rey suddenly pull a Daenerys and go full Mad Queen at the end of the trilogy? It wouldn’t go over well. But if Rey isn’t going evil, that still leaves plenty of fascinating options for that powerful final shot. If this is just a vision of an evil Rey, then who is having the vision and what is causing it?

The most likely theory is that Rey is having a vision of her own “future” as caused by Palpatine. The Emperor is looming large over both the first trailer and the teaser poster, and will undoubtedly play a large role in the story. He could also very well be tied to Rey’s humble origins. After all, Jakku was the site of Palpatine’s observatory where he studied Sith artifacts and the Unknown Regions in Chuck Wendig’s Aftermath books. I’m in no way endorsing the Palpatine as Rey’s grandfather theory, but could the Dark Side energy on the planet have affected Rey?

Palpatine could be trying to manipulate her in the same way Snoke manipulated her and Kylo Ren in The Last Jedi. Only rather than playing Force telephone, Rey is now seeing visions of herself as a Sith Lord, which could be a private fear of hers or could tie into something else that she’s afraid of. Could whatever mission the heroes are going on be bringing Rey face to face with a Sith artifact that is haunting Rey’s dreams?

This could also be a vision that Kylo Ren is having, rather than Rey. Correct me if I’m wrong, but we never saw the vision of Rey’s “future” that Kylo saw when they touched hands. We assumed it was the scene in the Throne Room, but could Kylo have seen a future glimpse of Rey in all black robes with a double-bladed saber? Of course, this could also be Palpatine manipulating the last Skywalker heir with visions of Rey turning to the Dark Side, since they’ve had a tumultuous connection over the past two films.

If it is Rey or Kylo who’s ultimately dreaming of Rey slipping to the Dark Side, we won’t know for sure until the film is released. However, I feel comfortable saying that Rey herself will not ultimately turn evil, though I’ve been wrong before and will be wrong again. This is a vision, but who is having it will remain a mystery until December 20.

“Do you like my new lightsaber? I got it at the maul.” pic.twitter.com/pQ0piVIKxb