So What’s the Deal With the Imperial Star Destroyers in Star Wars: The Rise of Skywalker?

Could they be tied to Richard E. Grant's character? 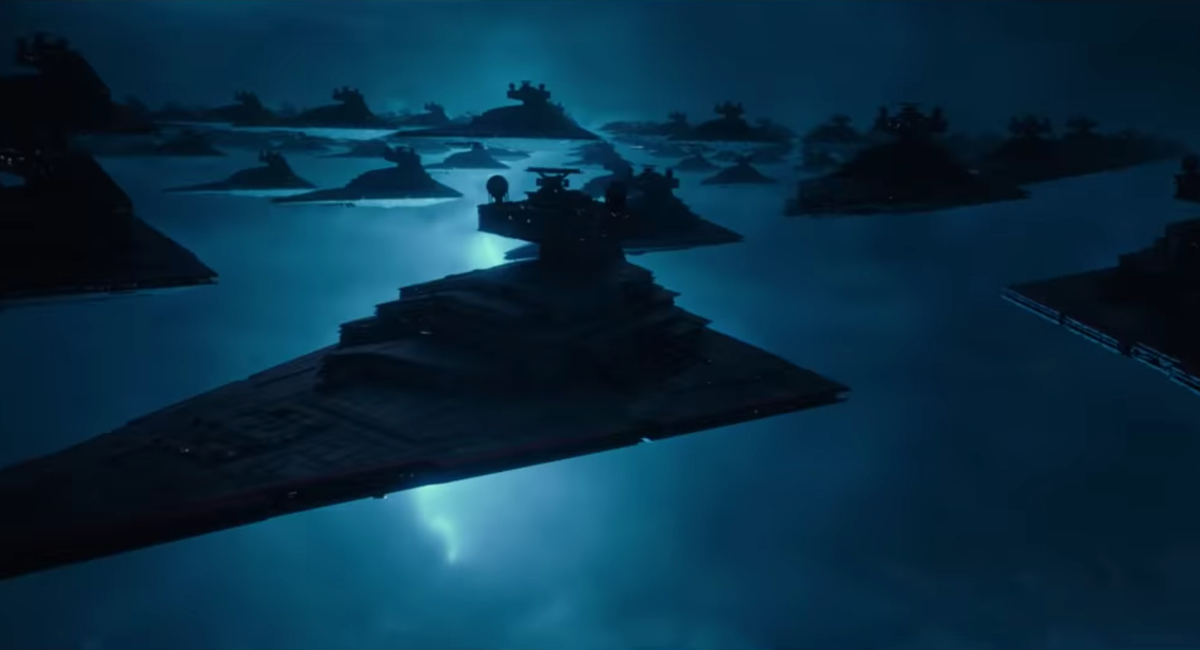 There’s a lot to break down in the very minimal footage we have of Star Wars: The Rise of Skywalker, including a tease of Rey possibly going evil, but there’s a small detail that I’m pretty interested in that I missed the first go around until a Facebook friend pointed it out. In the sizzle reel, there’s an absolutely beautiful shot of a fleet of Star Destroyers, silhouetted by lightning. But these are not the same designs as First Order Star Destroyers. Instead, these are classic Imperial designs.

We know the Empire would be playing some role in the film, based on the fact that Emperor Palpatine is haunting our protagonists. It’s also been made clear in the books and films that the First Order sprung from the ashes of the Empire, or so we thought. Perhaps the First Order, while still the villains, are not the only monsters stalking the galaxy. They might be the pawns of a larger play by Palpatine set up long before the Emperor met his fate.

We’ve covered how Chuck Wendig’s Aftermath trilogy might connect to the film, but here’s a quick refresher: it’s stated that Palpatine had a contingency plan for the fall of the Empire, which many of us interpreted to mean the First Order. However, between Palpatine’s surprise appearance, these Star Destroyers, and the yet unexplored Dark Side energies of Jakku, it could be that this particular fleet is, in fact, part of the plan as well.

There’s also the question of Allegiant General Pryce (Richard E. Grant), a mysterious new character we’ve only seen in the Vanity Fair photos posing with Hux. Allegiant General implies a loyalty to something, like loyalty to Hux and the First Order over newly crowned Supreme Leader Kylo Ren. Or, maybe he’s loyal to the Emperor and is commanding his hidden fleet of Star Destroyers. His Vanity Fair photo does seem to be in the conference room of a Destroyer, after all. Is Pryce a remnant of the past, come to help the Emperor take control once more?

The existence of a fleet also begs the question of when Palpatine hid his forces. These ships can’t have been at the Battle of Endor; all those Star Destroyers have been accounted for in various forms of canon. Did Palpatine hedge his bets before Endor came into play, or has this been brewing long before his death? The Thrawn novels by Timothy Zahn hint at Thrawn egging Palpatine towards a contingency plan, or at least a military presence in the Unknown Regions. This could be why Palpatine sent a fleet to hide away from the Rebels vs. Empire conflict.

There’s plenty of material here for The Rise of Skywalker and canon novels to mine for plot details. Something is up with the Empire returning, and I for one can’t wait to see how it is defeated once and for all, assuming we get a happy ending. As long as the First Order don’t suddenly become necessary allies, I’m sure I’ll be invested in how this all plays out.