Watching Star Wars: The Last Jedi in a Heteronormative Society: Why Labels Matter 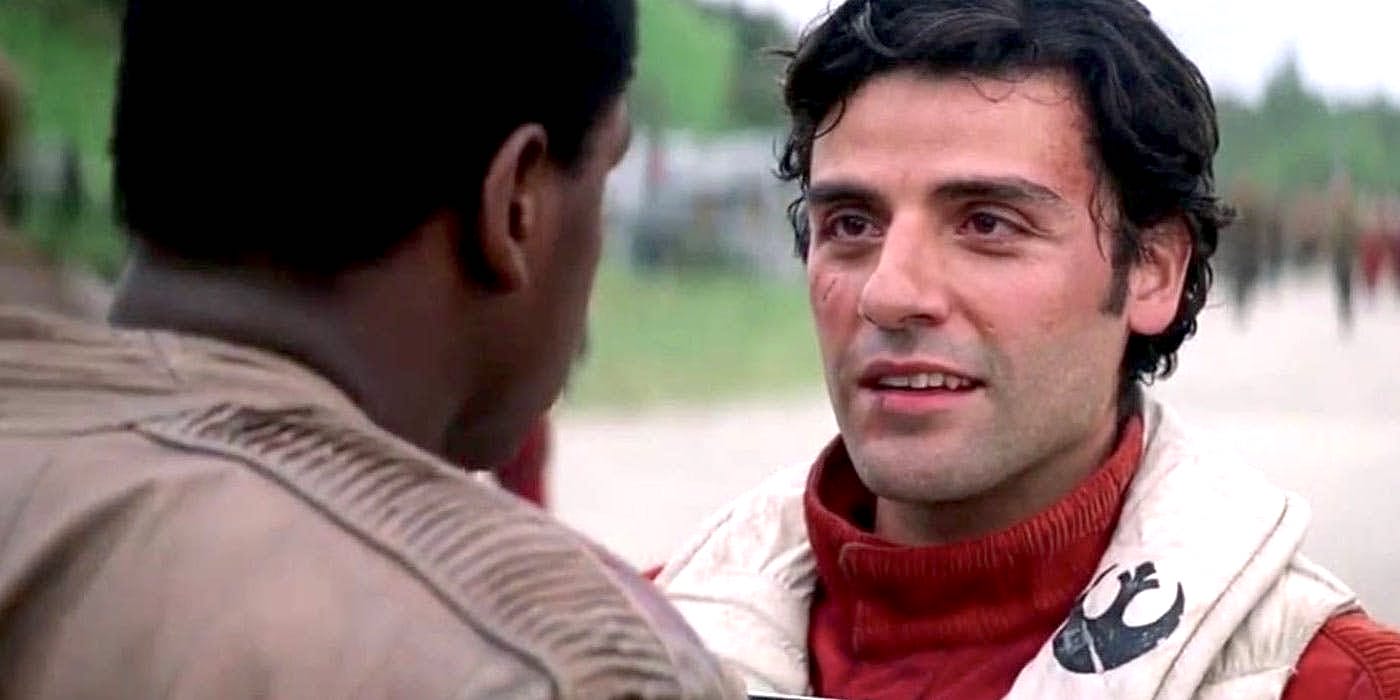 Like a large number of the U.S. population, I bought a ticket to see Star Wars: The Last Jedi for its first showing in my area. This isn’t a new tradition for me—two years ago, I was one of the first to see Poe tell Finn to keep his jacket. Last year, I was in an early audience as Chirrut and Baze protected one another until the very end.

The night of Last Jedi‘s opening, I thought I would be one of the first people to see an on-screen Star Wars character identified as canonically queer. After all, multiple signs have pointed to Poe Dameron, gleefully portrayed by Oscar Isaac, being a gay man since the release of The Force Awakens, the character’s first appearance.

These signs started with an interview in 2013, when Lucasfilm president Kathleen Kennedy highlighted the disparity between Hollywood and society, stating, “There should be many, many more faces of color, many more women, many more gay people.” The on-screen inclusion of more women and POC has been a point of praise for all of the universe’s recent releases (including Rogue One: A Star Wars Story), but there is still a lack of queer representation, as well as an overall lack of disabled characters and actors to portray them.

When The Force Awakens came out (hah) in 2015, fans immediately latched on to the chemistry between Poe and Finn, played by John Boyega. Speculation about the characters’ relationship was sparked with a jacket and a single line: “Keep it; it suits you.”

This is what we call a trope, y’all. For those unaware, there are helpful tools in storytelling that effectively show the audience an idea without stating it directly. These tools must be well-recognized to be accepted, and possibly the most common trope for signifying romantic interest is a man giving the person of interest his jacket.

It’s only grown since then. Both actors have spoken warmly of the other’s character, and director Rian Johnson retweeted fan art of the two kissing. The Vanity Fair cover image of the pair, from the magazine’s preview of the movie, understandably stirred tons of conversation about how they looked like they hastily got dressed after spending the night together:

Earlier this year, Kennedy acknowledged that because of the pair’s reception, behind-the-scenes conversations may have happened surrounding the relationship between Finn and Poe, but the relationship turning romantic wasn’t something fans should expect. However, just months ago, during a press tour, Boyega fanned the speculation when he suggested of the way Poe looks at Finn “either he needs to chill or come out.”

All of this primed audiences, myself included, for the expectation that Poe would, in some way, identify as queer, even if there was no romance between him and Finn.

Despite the insistence that the characters would not be in a romantic relationship, the first half of The Last Jedi heavily relied on storytelling tropes that (typically) signify otherwise.

The first came within minutes of the film’s iconic scroll. After returning to the Resistance ship port, BB-8 gives an update on Finn’s unconscious state. Since the audience doesn’t understand the beeping language, we get Poe’s response, which is an innuendo-laden interpretation.

That is so sexually explicit.

While the reality is far more tame, I’m actually still shocked that line was in a Disney movie. However, an ironic interpretation of language is a trope frequently used to reveal a character’s true desire.

Another well-known trope happens when the ship hanger is later destroyed and Poe is blown back into the hallway. Unsurprisingly, Finn is the first person to reach him, bending down to cradle Poe in his arms. Just ask Voltron fans—holding someone injured is definitely a bonding moment. Each of the characters’ subsequent conversations, both face-to-face and over communicators, are full of language that suggest the two care deeply for one another.

All of that is for naught, though, because Poe does not declare his love, nor his sexuality. Instead, these interactions can be read as queerbaiting, and because there is no definitive answer, Poe’s sexuality falls to “the ellipses”—an unacknowledged, unknowable space described by Mark Harris as the place where Hollywood has cowardly placed the LGBTQ identity to avoid controversy.

The issue with not explicitly labeling a character’s sexuality, though, is that the audiences of a heteronormative society will latch on to heteronormative interactions. Numerous tweets have mentioned the tension between Poe and Laura Dern’s Holdo, assuming attraction when it might be better interpreted as a problem with authority. Dern’s Holdo was gorgeous (heck, I have a crush on her now) and unwaveringly strong, but there was little sexual chemistry between her and Poe. I watched those scenes expecting it, and I saw none. Even if someone else did, it surely could not measure to the lip-biting reunion from the first film. Also … *whispers* Holdo is dead. Nothing’s going to happen there.

Additionally, the film ends with a cringe-worthy interaction between Poe and Rey, yet their introduction has already sparked a number of articles analyzing a developing relationship between the two. Even though the scene is all of two seconds, it includes the famous line, “I know,” first said to Leia by Han Solo. 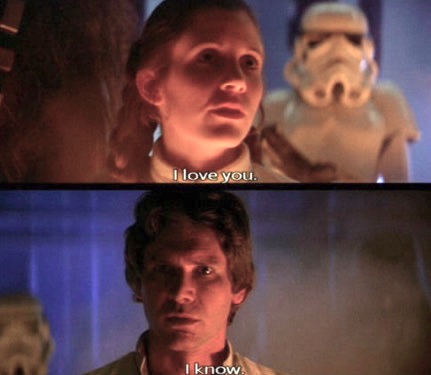 Despite its awkwardness, the relationship potential seems obvious because, well, it’s an attractive man and an attractive woman. Indeed, Poe Dameron seems like the Han Solo for a new generation. But what if he had said, “I know,” to a man? In a heteronormative world, two women are seen as potential options for Poe, but only because they’re perceived as the default options, based on gender far more than storytelling choices.

As an audience, we know nothing of Poe’s dating history. Yet two short, uneventful interactions with women are seen as enough proof to view him as heterosexual, negating his tension-filled relationship with Finn. (Could Poe be bisexual? Maybe. I wouldn’t be mad, but that would still require a clearly-stated label to overcome assumptions.) Because Poe has not explicitly stated his sexuality, any interpretation of it deviating from heterosexual won’t be accepted by the mainstream audience; it remains fan theory.

Yes, “the suggestion that sexuality might still need to be signposted on the screen through coded queerness and stereotypes is deeply troublesome,” but this is why labels are still important. Storytelling choices and fan interpretation can only go so far, no matter how popular they become. The ability to label a character still belongs to the studio, and therefore, so does the power to represent an entire community.

However, in that April interview, Kennedy made a claim that (if made in earnest) may begin to bridge that power divide. Describing every nerd’s fantasy, Kennedy said that “the fans are as much masters of this franchise as [the studio is].” If that is indeed the case, here are my demands:

I don’t need to see Poe and Finn in a relationship. Honestly, at this point, I don’t want to see a developing relationship as the main plot for Poe. Poe Dameron is the Byronic space hero for this generation; we love him because he’s loud, sarcastic, and arrogant, just as Han Solo was before him. But Han had Leia, and while that relationship matured Han, it didn’t define the character. Iinstead, it inspired him (and us). Poe deserves that same inspiration, and queer audiences deserve to see his development. Still, though, I don’t demand a relationship. A Vanity Fair article explains that even the inclusion of a canonically queer character in the film would give fans hope, the opportunity to be seen.

This is what I demand:

Let me see a character who is brave, who is cocky, who is loved, who is accepted, and let him just so happen to be gay (or bisexual). Not as a plot point. Not as an “agenda.” Just because that is who he is. Because a person’s sexuality doesn’t define them, but it also doesn’t prevent them from being a hero.

Megan Hoelting is a college instructor and researcher who examines identity and representation in education, fandom, and popular culture. She informally chats about those topics on Twitter @meganhoelting.