How Queerbaiting Discussions Show Heteronormativity Is Alive and Well 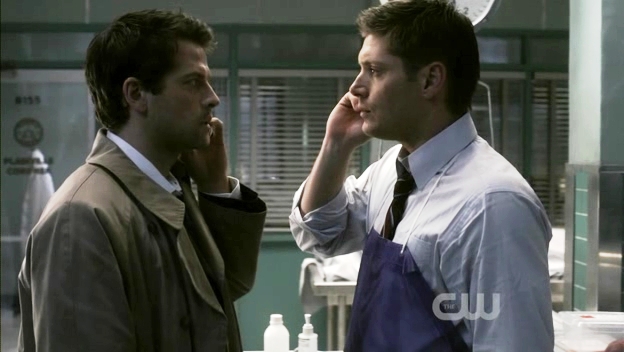 A number of popular television shows have attracted claims of queerbaiting, which is when a show flirts with queer subtext without offering meaningful representation. It’s an exploitative way of encouraging queer fan investment without risking the loss of an assumed heterosexual audience. When creators craft a deep relationship between characters or play on antagonistic chemistry, for some viewers there is an anticipatory pleasure in foreseeing a romantic culmination to the character arcs. This is all perfectly normal in the case of opposite sex pairings, yet rooting for same sex pairings continues to get side-eye. Instead of asking whether or not fans are being queerbaited by certain shows, this article approaches queerbaiting from a different perspective. After examining opposite sex relationships in television shows that share multiple narrative similarities with programmes cited as examples of queerbaiting, a clear disparity emerges between expectation and assumption when it comes to same sex pairings.

Let’s take crime-focused detective series. Two people are thrown together and develop an unexpected bond. This is the case with Patrick Jane and Teresa Lisbon in The Mentalist. She’s a hardworking officer at the California Bureau of Investigations and he’s a fraudulent television psychic who lost his wife and child in a horrific murder committed by serial killer, Red John. In Castle, mystery writer Richard Castle joins NYPD homicide’s Kate Becket. In Bones, FBI Special Agent Seeley Booth joins forces with forensic anthropologist ‘Bones’ Brennan. In X-Files, both Mulder and Scully are FBI agents, and there’s sci-fi and stuff, but the show adopts the familiar trope of two people working together to solve cases.

The trope of falling in love when working in close proximity doesn’t differ when the show is about demons and the supernatural as opposed to crime fighting real world realism. In Buffy the Vampire Slayer, Buffy and the Scooby Gang work together to fight the Big Bad and defend Sunnydale from the apocalypse. In The Vampire Diaries, Mystic Fall is home to two vampire brothers who are often required to save the town from darkness and demons, developing relationships with other characters along the way, most notably Elena Gilbert. In Charmed, good witches the Halliwell sisters protect the world from demons and warlocks, with whitelighters (or guardian angels) assigned to protect the sisters. Both Charmed and The Vampire Diaries have familial relationships at their heart, much like Supernatural where the Winchester brothers work together to hunt demons.

Supernatural worlds are rife with opportunity for exploration of forbidden or unorthodox relationships between whitelighters and witches (Piper and Leo in Charmed) or warlocks and witches (Phoebe and Cole in Charmed) vampire slayers and vampires (Buffy and Angel) and the ever popular good girl falls for bad demon trope (Damon and Elena in Vampire Diaries and Buffy and Spike in Buffy). The heady consummation of the relationships come after plenty of simmering tension, the use of romantic tropes and the adrenaline rush of defeating evil, underworld forces. A bit like the relationship between angel Castiel and demon hunter Dean in Supernatural, which has to date failed to find any canon purchase.

Then there’s falling in love with your best friend. Joey and Dawson from teen classic Dawson’s Creek, Ted and Robin in How I Met Your Mother, Dan and Vanessa in Gossip Girl and Monica and Chandler in Friends. Yet mainstream television often fails to translate friendship into romance with same sex pairings, despite employing similar romantic tropes, repeated expressions of devotion and lots of intense staring. Just look at Merlin (Merlin and Arthur) and House (Wilson and House) for examples of same sex television friendships where any romanticised intimacy remains firmly in subtext.

There’s also the “falling in love with the friend of your first love” trope. Robin and Barney in How I Met Your Mother, Joey and Pacey in Dawson’s Creek, Blair and Chuck in Gossip Girl and Joey and Rachel in Friends. Some teen shows like Gossip Girl give us every possible het combination, yet same sex partner swapping is far less frequently explored. Gossip Girl didn’t do anything with Chuck and Dan, Chuck and Nate or Serena and Blair, despite a moment where Chuck suggests he’s had previous encounters with men and the fact the books which inspired the series depict Chuck as bisexual. In Teen Wolf, a moment in Season 3 seemed expressly designed to open up a bisexuality storyline for Stiles, yet never came to fruition.

What I find as unsettling as queerbaiting itself is the way queerbaiting debates unfold. The desire to see same sex pairings become canon has a tendency to be dismissed by language with negative connotations. Fans are called delusional or accused of gay fetishizing (despite often being queer themselves), entitled or projecting. There’s derisory scoffing at the suggestion characters might be gay, as if sexuality isn’t more fluid than that, as if bisexuality isn’t a thing.

The suggestion that sexuality might still need to be signposted on the screen through coded queerness and stereotypes is deeply troublesome. Why is it so difficult to believe that John Watson or Dean Winchester might not be straight? Have they not been sufficiently flamboyant enough? Suggestions of queerness are often refuted with examples of “straightness” which only serve to reinforce sexuality as binary, equate heterosexuality with machismo and render sexuality performative. Reading queerness is an entirely different exercise. Queer coding exists because of the historical persecution of LGBT people. Straight coding isn’t a thing, because heterosexuality has never been forced into a celluloid closet. It has never had to be coded.

Fans lobbying for a relationship between their opposite sex favourites encounter a different response to those lobbying for same sex ships, because heterosexuality is always the default assumption. Nobody ever suggests the het ship can’t happen because the characters are obviously gay. The counter arguments focus on the lack of platonic relationships between men and women on screen. Overexposure is definitely not a problem queer relationships suffer from. What queerbaiting discourse ultimately seems to suggest is that the pursuit of a same sex romance still warrants interrogation, when seeking the same result from opposite sex pairings does not. The way queerbaiting is discussed and dismissed demonstrates, perhaps as much as queerbaiting itself, how far we still have to go in terms of normalising the diversity and complexities of queer desire in mainstream television.

Emily is post-graduate student at the University of York and a freelance writer. Her research focuses primarily on post-Stonewall American LGBT fiction, LGBT young adult fiction, trans performance poetry, fanfiction and fan communities.  She blogs regularly about queering popular culture and bierasure in mainstream narratives. She is an avid writer in several fandoms. After leaving employment to return to academia full time, she is also actively involved in local community LGBT activism and volunteer work. You can find her on Twitter @dustlesslibrary.