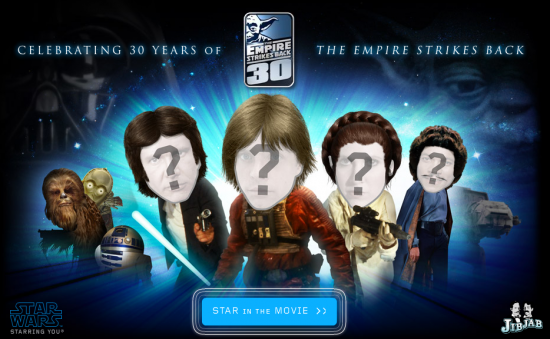 Today is Star Wars Day, apparently — something to do with the pun “may the 4th be with you.” As our friends at Switched point out via Twitter, a lot of people are apparently searching Google for Star Wars quotes and Yoda quotes right about now. Maybe it’s a British thing? The more substantive bit of news on the discerning Star Wars geek’s calendar is that the 30th anniversary of the theater release of The Empire Strikes Back is coming up on May 21st, and LucasFilms is going to be making an event of it, with lots of red carpet screenings and charitable events.

The folks at online humor studio JibJab have come up with a novel way to celebrate: In collaboration with LucasFilms, they’ve rolled out a feature on their site that lets you insert the faces of you and your friends into scenes the original Star Wars trilogy. The effect is strange, to say the least:

Via TechCrunch comes this video of some of their writers inserted in some of the most memorable scenes in A New Hope:

One downside here: Anyone can create their own Empire Strikes Back clips, but you have to pay to make clips from A New Hope or Return of the Jedi. TechCrunch sees “a big monetization opportunity here,” but it’s unclear who would actually pay for what amounts to a neat but inessential web novelty. Then again: never underestimate the fervor of Star Wars fans.

JibJabMay the Fourth be With YouStar Wars (franchise)Star Wars DayStar Wars: The Empire Strikes Back