Seriously guys, do I have to write about you every day? 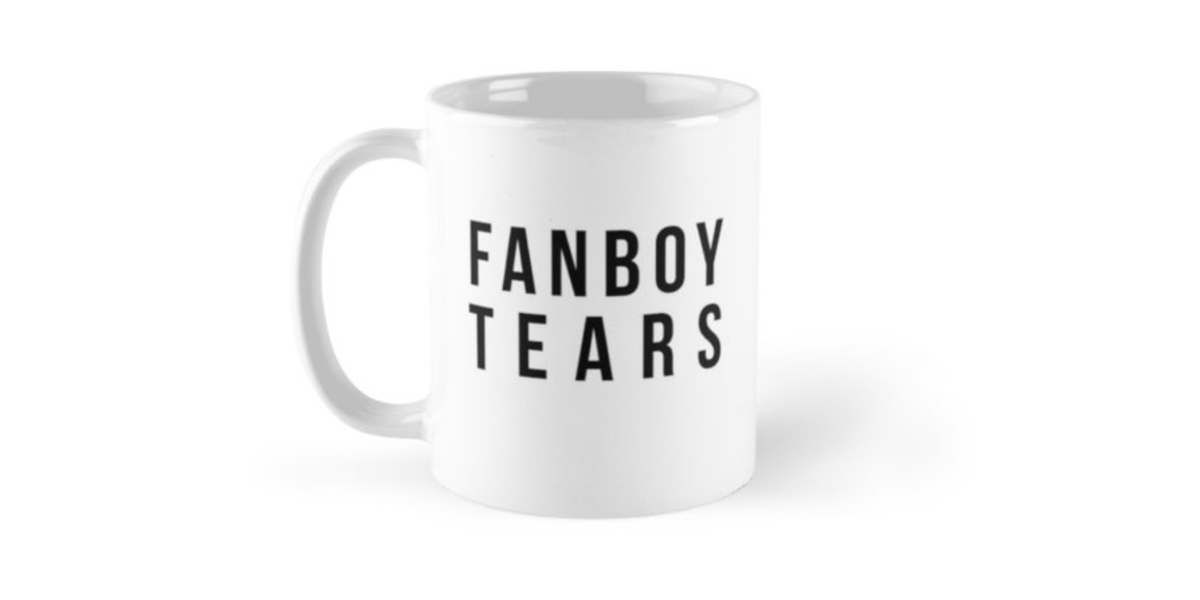 Another day, another Star Wars fandom situation. This is becoming a trend, and I’ve only been working for this site for three whole days.

Today, I logged onto Twitter to find that constant-thorn-in-the-fandom’s-side Rebel Force Radio, a podcasting duo, had posted a picture of Star Wars Show host Andi Gutierrez drinking from a mug that proudly says “Fanboy Tears” (for those who are interested, you can purchase the mug here; one half of the store’s owners recently posted that all proceeds generated this month would go to the ACLU).

Rebel Force Radio included Gutierrez’s Twitter handle in the post. Naturally, the vitriolic fanbase that RFR has cultivated went wild, saying that Gutierrez was being unprofessional and being rude to fans.

This is not the first time that this podcast has been embroiled in harassment. Lucasfilm author Chuck Wendig has faced an endless wave of hate, including shirts being made bearing his image and nasty slogans, ever since he introduced the new canon’s first LGBT characters in his Aftermath books. StarWars.com contributors such as Amy Ratcliffe and Geek Girl Diva are also targeted, as is Lucasfilm Story Group member Pablo Hidalgo. Gutierrez is perhaps the most recognizable face of Star Wars PR, as the host of the Star Wars Show, the Celebration livestreams, and the red carpet livestreams.

“The image they chose to get angry over is two years old, so this was definitely coordinated against her,” said Catrina Dennis, a writer and one of the associate producers of Looking for Leia, during an interview with The Mary Sue. “She’s one of the most visible women in our fandom.”

The Star Wars fandom has been a source of controversy and thinkpieces since The Last Jedi backlash exposed the grim underbelly of the community to the public. The hatred has existed since Disney bought the franchise and revealed that the leads were not going to be all white men with a token woman; John Boyega’s Finn led to backlash and threats of boycotts. But it took the deconstruction of Luke Skywalker as a human being, not a perfect hero, to really unleash the monsters hiding under the bed.

We’ve talked about the fandom at large, but how do we deal with the backlash? With Star Wars communities turning into Thunder Dome-esque platforms where people are sniping at each other and at creatives, and creatives openly saying the backlash isn’t worth the joy of making a Star Wars film, how do the fans themselves bring their world back to the Light Side?

“A little while back, I had to take a tiny break from the fandom after a small group of people decided to load up my inbox with calls for me to leave the fandom due to the kind of voice that I represent in the fandom,” Dennis told us. “But, I think leaving would have been showing them acknowledgment, so here I am, doing what Carrie Fisher would want me to do—flipping off the jerks and enjoying Star Wars.”

It would be easy to look at big voices in the fandom, such as Rebel Force Radio, as indicators that the majority of Star Wars fans are bigots, rude people, and in general entitled babies (so basically, they’re all Kylo Ren). But they are also a minority opinion in fandom. More people are there to share, to create, and to build a community. Even if there are reasons to disagree—some people didn’t like The Last Jedi for legit reasons!—most people make peace with each other. It’s only the trolls that stand out because they’re too loud, but they’re also on their way out.

“I think the most important thing to remember is that as these guys phase out into their corner of obscurity, there are generations of people—kids, adults, seniors—who are all joining this fandom and learning about Star Wars,” said Dennis towards the end of our interview. “Focus on the experiences you’ve had, the friends you’ve made, and redirect that good energy toward these new fans. Almost all of us are here because we find joy and peace in these stories, so that’s what we need to spread in the face of ugly rage from toxic fandom.”

Dennis concluded by talking about how “the individual voices make [the movements in fandom] so important” and cited pages like Ladies of the Legions and movements like #SWIsAGirlThingToo that highlight positivity in fandom.

She’s not the only one who thinks the trolls are on their way out.

“There’s this sense sometimes, and I’ve felt it, that ‘Wow, Star Wars Fandom is really messed up,’ but that’s a huge, huge mistake, and it gives these abusers way too much credit. They’re really noisy, and it makes it seem like there’s this huge division, but really, there’s not,” said author Chuck Wendig when contacted for a comment. “This is a small, but loud, group of people. They’re effective! But they’re not ‘the fandom.’ Fandom is huge, a giant diverse chunk of people. I think fans are the ones who like things—not to say they need to like them without fail or reservations—but harassers and abusers do not, to me, qualify as fans. Fanatics in the truest sense, maybe, but not ‘fans’ in the positive sense.”

There you have it. There are ways to fight the Kylos of fandom, even as the characters onscreen fight their own villains. Be the galaxy’s hope yourself. Don’t wait for anyone else to bring light to your fandom world.