It’s one of the most oft-quoted Star Wars lines…but have you ever wondered why Leia calls Han a “scruffy-looking nerf herder?” Well, you can thank Marvel and their continually awesome Star Wars comic for providing some much-needed back story. *SPOILERS IF YOU’RE NOT CURRENT WITH THE COMICS, YO!*

In Star Wars #17, while out with Luke trying to get more supplies for the rebellion, Han loses their money gambling in a game of sabaac. Ooooof course he does. So what does he have to do next? What he does best – smuggle! Now, Luke’s pissed because they now have to smuggle in order to earn the money to get the rebellion supplies they came out here for in the first place. I can hear his annoying, twerpy voice complaining about it now….. (sorry, Mr. Hamill. You, sir, are a gentleman and a scholar)

So, Luke ends up making a deal on the smuggler’s moon, Nar Shaddaa… 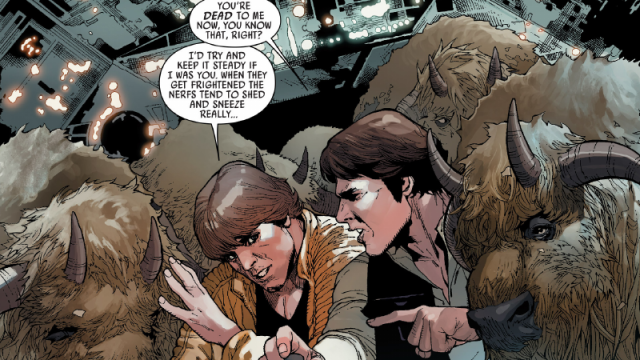 …and the cargo is a herd of nerfs. Which look remarkably like yak-buffaloes. What’s more – in addition to being kinda smelly and gross – these nerfs are apparently being tracked by the Imperials! 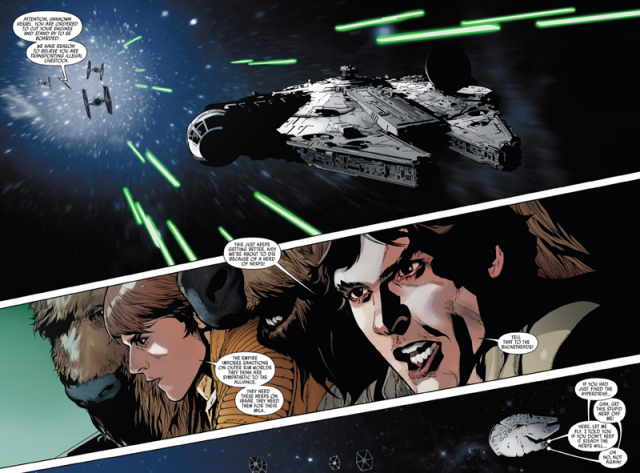 Listen, Han. If you didn’t want to herd nerfs, maybe you shouldn’t have gambled away all the Rebellion’s money. It’s no wonder Leia was so pissed when she heard about it. As reported by io9, there’s a reason why this incident happening at this particular time might have really hit a sore spot for Leia:

[This incident] comes smack bang in the middle of an issue that sees Princess Leia being forced to grapple with the moral soul of the Rebel Alliance, and the ethical compromises that may have to be made in order to combat the Empire—all while a secret Rebel prison housing Imperial war criminals comes under attack from a mysterious group intent on killing rather than imprisoning the captives.

I like to think that, after this, Han learned to gamble with his own money in future.