Things We Saw Today: If You Need Us We’ll Be Drinking This Star Trek: TNG Ten-Forward Vodka

I’ve written about how if I could live in any fictional universe it would probably be Star Trek‘s and, knowing myself, I wouldn’t wind up in Starfleet but rather as a stowaway on the Enterprise who begged Guinan to let me help out in Ten-Forward.

That iconic ship’s lounge was the center of many a soul-searching conversation with Whoopi Goldberg and also provided ample opportunities for William Riker to show off his incredible approach to sitting in chairs. Now you can bring the cheer and the intoxication of Ten-Forward into your home with this officially licensed vodka. They are actually sending the vodka to space first (!?!) in order to make it all the more “authentic.”

Okay, clever marketing ploy, you got me. Sayeth the press release:

To honor the Star Trek legacy, Ten-Forward Vodka will travel into space before it is blended into the stocks of the premium spirit insuring that a portion of every bottle will contain out of this world vodka. Sold at TenForwardVodka.com, this spirit allows discerning vodka drinkers to go where no man has gone before.

In order to illustrate commitment to the Star Trek legacy, provide further authenticity, and create additional demand, sending Ten-Forward Vodka to space was prioritized as a necessary branding endeavor.

Ten-Forward Vodka sells for $29.99 and is made from choice American grain, carefully distilled six times, and delivered via terrestrial and interstellar transport for the enjoyment of adventurers on planet Earth, onboard the Starship Enterprise-D, and across the galaxy. Graphic designer and Star Trek veteran Mike Okuda lends his contributions to this product.

At the end of a long day of going boldly into the unknown on Star Trek: The Next Generation, the crew of the Starship Enterprise-D often relaxed in the ship’s Ten-Forward Lounge. It was there, in what many considered to be the true heart of the ship, that off-duty crew members often gathered to socialize, share a meal, or enjoy an after-hours drink. Ten-Forward also saw diplomatic receptions, concerts, and even some epic three-dimensional chess battles. Situated on Deck Ten on the forward edge of the ship’s primary hull, the crew’s favorite gathering place featured large windows offering a spectacular view of the infinite cosmos beyond.

There are really badly thought out branding ideas like Handmaid’s Tale-inspired wines and Handmaid’s Tale-inspired sexy sleepwear and basically anything made with the Handmaid’s Tale, a story of a crushingly oppressive dystopic future, as a fun thing to drink or wear. But this Ten-Forward vodka looks pretty on the nose and they’re sending it into space. Apparently, there’s also a James Kirk-inspired bourbon if you prefer your liquor with a punch. 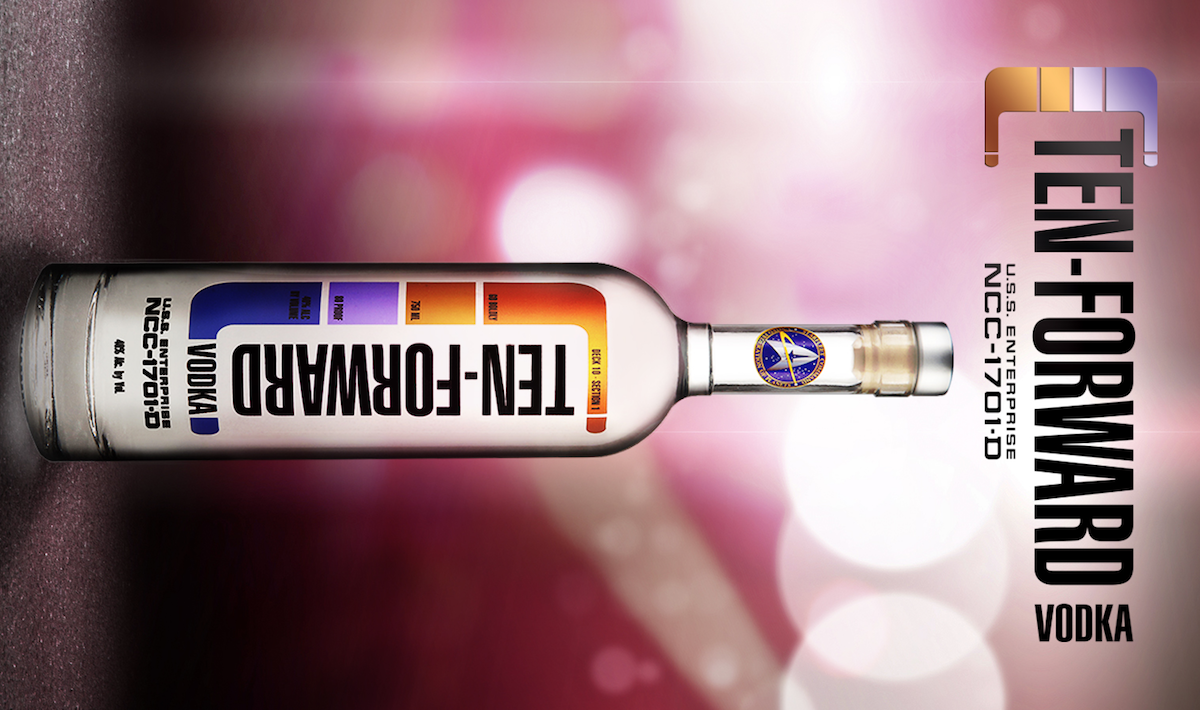 It’s Friday, everyone! What a week, am I right? Can they drop this vodka straight out of space and through my window right now?