Simon Pegg Pranks Everyone on Set of Star Trek Into Darkness, Continues to Be the Best [Video]

Are you protecting yourself against the harmful ionic effects of lasers? For that you need neutron cream, a totally made-up thing that Simon Pegg convinced the rest of the Star Trek Into Darkness cast they all needed to wear. He’s been telling the story on talk shows for months, but we’ve finally got video of the prank in action — and it is glorious.

The prank apparently began when Pegg tricked Chris Pine into thinking that he should be wearing neutron cream and from there the story took on a life of its own, to the point where even the makeup crew were getting involved. As you can see from the video above, which was taken from the behind the scenes DVD extras, they were even creating actual jars of cream to pass around and telling people they had to wave their fingers around to “release the ions” from their body. Listen, I get that acting is a demanding profession in a lot of ways and that being on the set of Star Trek means that there’s probably a lot of nonsensical technobabble being bandied about, but really? You all bought neutron cream without thinking about it?

Simon also tweeted out several pictures that he took during the prank, including this one of him and co-star Benedict Cumberbatch:

Me and Cumbersbumberswumbers wearing neutron cream. Before we told him it wasn’t real. http://t.co/L4x6WaqHwc #intodarkness

Between this and the fake neutron cream waiver — which of course he signed without reading — Cumberbatch appears to have bought the ruse the hardest. 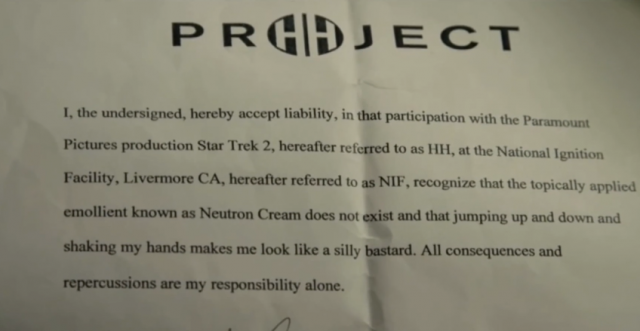 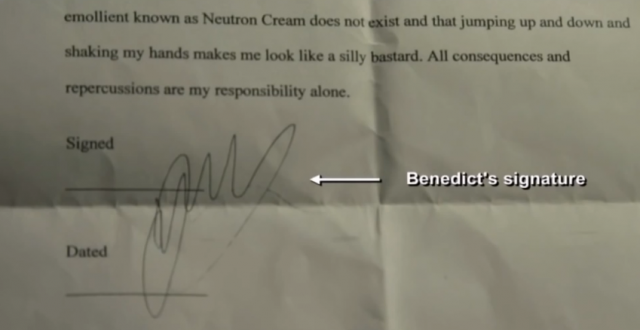 And that, kids, is why you always read what you’re signing. Especially when it’s only, like, a paragraph long. Come on, Benny!