Star Trek: Discovery's Finale Was a Mess | The Mary Sue

An energetic mess, but a mess nonetheless. 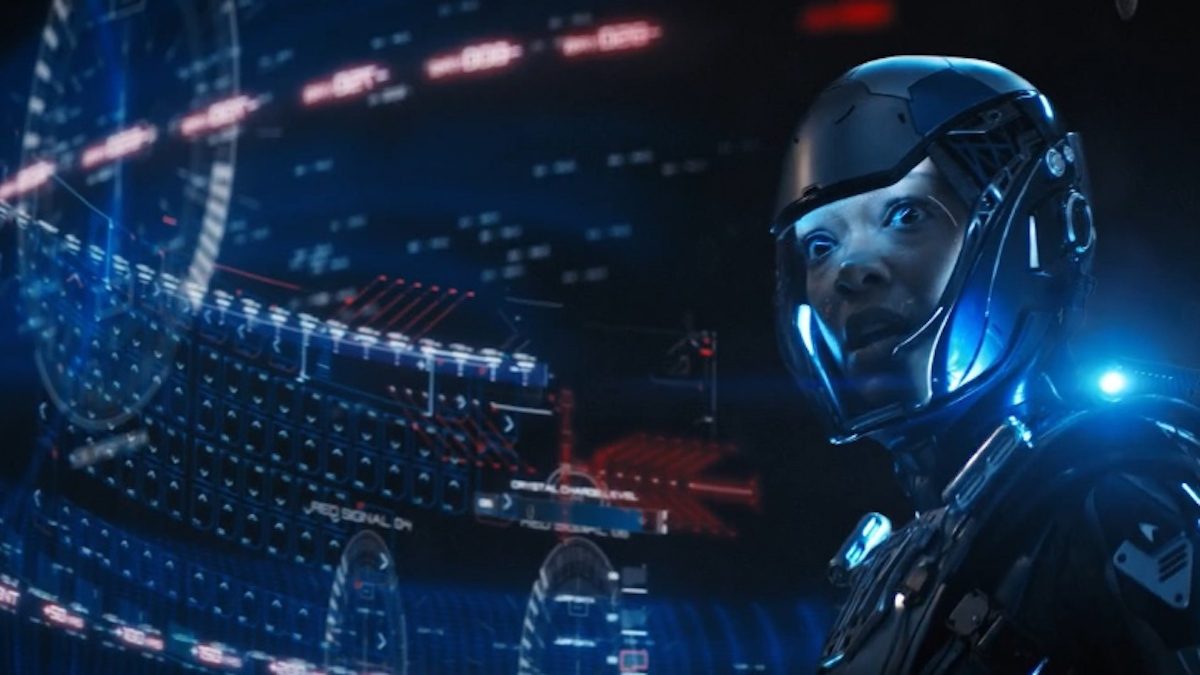 ***Spoilers for the season two finale of Star Trek: Discovery***

I wish that there was a better, kinder word with which to describe Star Trek: Discovery‘s season finale, “Such Sweet Sorrow, Part 2.” But the episode, a loud and clangy combustion of an already hard-to-follow season, was like Discovery‘s normal bombastic pitch turned up past eleven.

As I’ve written in previous criticism of Discovery, by no means do I hate this show. I quite like many elements of it, and there are a few characters that became standouts for me this season beyond Michael: Ash Tyler, Captain Pike, and the Terran Phillipa Georgiou are almost always interesting in whatever they do. The most pleasant surprise in season two was the evolution of Ethan Peck’s Spock. I was afraid he was going to be a gimmick shaped entirely out of nostalgia-clay, but in the last few episodes, Peck did a fine job filling out those noble ears, and Spock’s complicated relationship with his sister Michael was convincing and touching.

My rebuke of Discovery stems from the fact that I believe the show can be so much better as a whole, and for every step forward, it seems to take two back at warp speed. Its worst instincts are a tendency to explosive largesse better suited to cinema, leaning on a crutch of Trek nostalgia past, and underbaked characters delivering over-the-top dialogue. Unfortunately, all of these elements were out in full force in the conclusion of the two-part finale.

I don’t know what I was watching last night, but much of it did not feel like Star Trek. A great majority of the episode, an incoherent intergalactic space showdown between Discovery, the Enterprise, and Control’s Section 31 drone ships, was far more Star Warsian in nature. The similarities were starkly there, replete with the swells of a Star Wars-like score and battle noises, attack shuttles zooming about like X-Wing fighters, robots appearing out of nowhere to fix damage to a ship. “What the hell is that?” I asked as droid-like flying things were deployed from the Enterprise to help with its photon torpedo hull breach. “R2-D2,” replied my friend.

But unlike Star Wars, these nonstop battles bordered on total pew-pew-pew incoherence, the stakes were unclear, and there was little consideration of the human costs—other than Spock and Queen Po, the pilots inside those sacrificial fighter shuttles and pods were never glimpsed.

Instead, the episode galloped ahead through an unceasing barrage of laser fire and explosions, trying to make a few forced minutes of human and/or alien connection here and there. This frenetic pace would be impressive if it was what we’d signed up for or made any sense.

Listen, I’m happy that Discovery finally kinda reconciled Doctor Culber and Stamets, but after a season where their only interactions were painful when we saw them at all, it didn’t feel satisfying or convincing, or a real effort by the show to unbury its gays. Culber changes his mind about leaving … for some reason? Because Reno, a character he’d barely talked to, gave him a talking-to? Cool, cool.

Speaking of characters who barely talked but we’re suddenly supposed to care about, the sudden focus on Number One and Admiral Cornwell as they went to try and disarm the photon torpedo was totally out of left field. Further, Admiral Cornwell’s sacrifice felt shoehorned-in for the sake of needing a dramatic finale death, and, like much of the episode, was just head-scratching. If they could just manually deploy the blaster door to counter the whole torpedo mess, why not rig up a way to do that from the start as a failsafe? (Why not send in some of those R2-D2s?) And why couldn’t they beam the Admiral out once she’d gotten the door in place? This whole sub-sub plot felt like a digression and a waste of time in an already jammed sequence of events.

We haven’t even gotten to Leland/Control infiltrating Discovery, yet another subplot that felt ripped out of an action movie happening somewhere else. While the rest of the ship seems utterly unconcerned that their AI enemy is running about, Michelle Yeoh’s Georgiou, with the assistance of the security officer whose name I can’t remember because all we know about her is that she can’t breathe oxygen (it’s Nhan, thanks Memory Alpha), are the only ones pursuing Leland.

What follows is interminable combat between them that drags on into zero gravity, a sequence that must’ve seemed cool in the pitching process but just feels like another exhausting distraction. Did we really need this? And when Georgiou finally traps Leland in the chamber and somehow “magnetizes the spore drive”—OK—the threat that has dominated the latter half of the season is suddenly neutralized but it hardly seems to matter? (Good/bad news depending on where you fall on the issue: at least no sign that this was the definitive Borg origin story!) 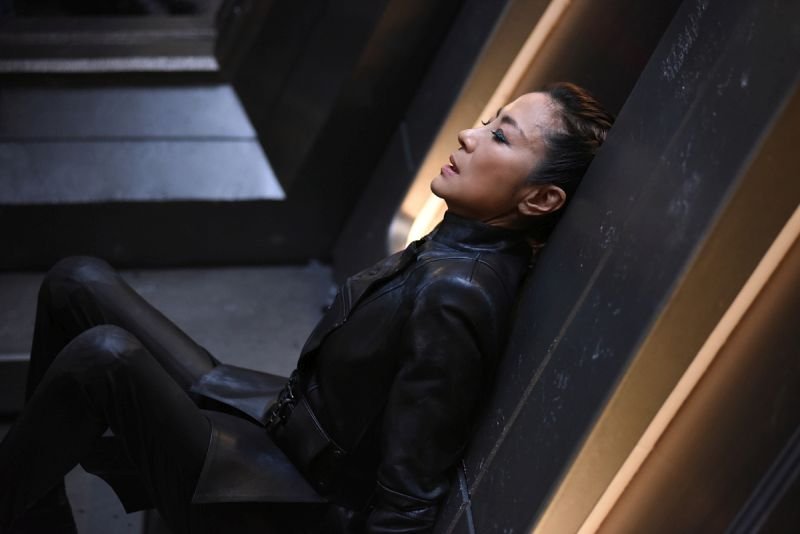 I am also tired, Philippa.

I’ve written nearly 800 words and we’re still not at the crux of the episode, that is, Michael’s mission to take Discovery forward in time to secure the sphere data forever (or until Control develops a way to follow them there, which considering time crystals are now a thing, doesn’t feel too far-fetched.) As always, the wonderful, unstoppable Sonequa Martin-Green throws herself into making Michael’s material convincing and emotional. But Spock and Michael’s sudden realization that it was Michael leaving the seven signals all along and that they’ve been caught in a “time loop” is … please don’t get me started. I am so very, very tired.

The episode then wormholes into its most self-indulgent, boring phase, in which we see Michael traveling back in time to the various signal locations to set them, complete with lengthy flashback montage scenes of those episodes. “God, we already know,” I barked at the television. Anyone who’s been watching Discovery is well aware of what happened, and if you were just tuning in for the first time to catch the finale, you’ll have a lot more to puzzle through than what the hell is going on with the signals and the Red Angel. So this just felt unnecessary, more precious time given to complicated window-dressing and expository summing-up than to character development, which is beginning to feel like Discovery‘s raison d’être.

The best part of this whole thing—and one of the better parts of the episode—was Michael’s initial fall through a blinding field of time. It was stunning, and much kudos are due to the graphics department, but this glimpse of what Discovery can really do when it’s pushing exploratory visual boundaries just made the rest of the jumbled space fight seem like even more of a waste.

It also took almost to the end to reach the emotional payoff of Michael and Spock’s total reconciliation. While the scene was played with heartfelt verve by both Green and Peck, and was moving, once again Discovery was leaning too hard on the implications of Star Trek canon. “Awesome, so Michael is the original Kirk/Spock shipper,” I exclaimed, as Michael told her brother to reach out to those unlike him and keep them close in order to retain his balance.

Then Michael pulls Discovery into the distant future. This is a development that will either remake the show for the better or turn it into a sort of time-traveling Voyager knockoff. The potentials to explore a far-flung Star Trek universe, far removed from any that we’ve seen before, are dazzling. But if Discovery decides to spend its next season searching for a way back home through time, I am already even more exhausted than I was before.

Yet how can they not? The Discovery crew made the decision in crisis to leave absolutely everything and everyone in their lives behind and will now be 900 years into the future on a much-damaged ship. Are we to expect that there’s no fallout there, and everyone will be keen to just hang out in an alien, likely hostile, totally unknown future forever?

On the other hand, the final part of the finale, in which we learn that Ash Tyler has been named the new Section 31 head (does this mean he’s on the spin-off show? What about Georgiou, now trapped in the future, but rumored for the spin-off?), and Pike, Spock, and Number One have all decided to retcon Discovery‘s actions from existence (to keep the sphere data safe or something?) suggests Discovery may stay put where it is.

The last scenes, a nostalgia-fest in which we see a fresh-shaven Spock in that iconic blue uniform taking his place at the science station on board the Enterprise, were pretty great if we were watching a rebooted show about Pike’s Enterprise. But the total shift in focus away from what had become of Discovery felt disorienting. I’d be totally down to watch this series with Captain Pike and Spock and maybe the hotshot young James Kirk they pick up along the way. As for Discovery, I have no idea where we’re going, or when, or why.