'Star Trek: Discovery' Should Stay Away From the Borg | The Mary Sue

Star Trek: Discovery Should Stay Away From the Borg 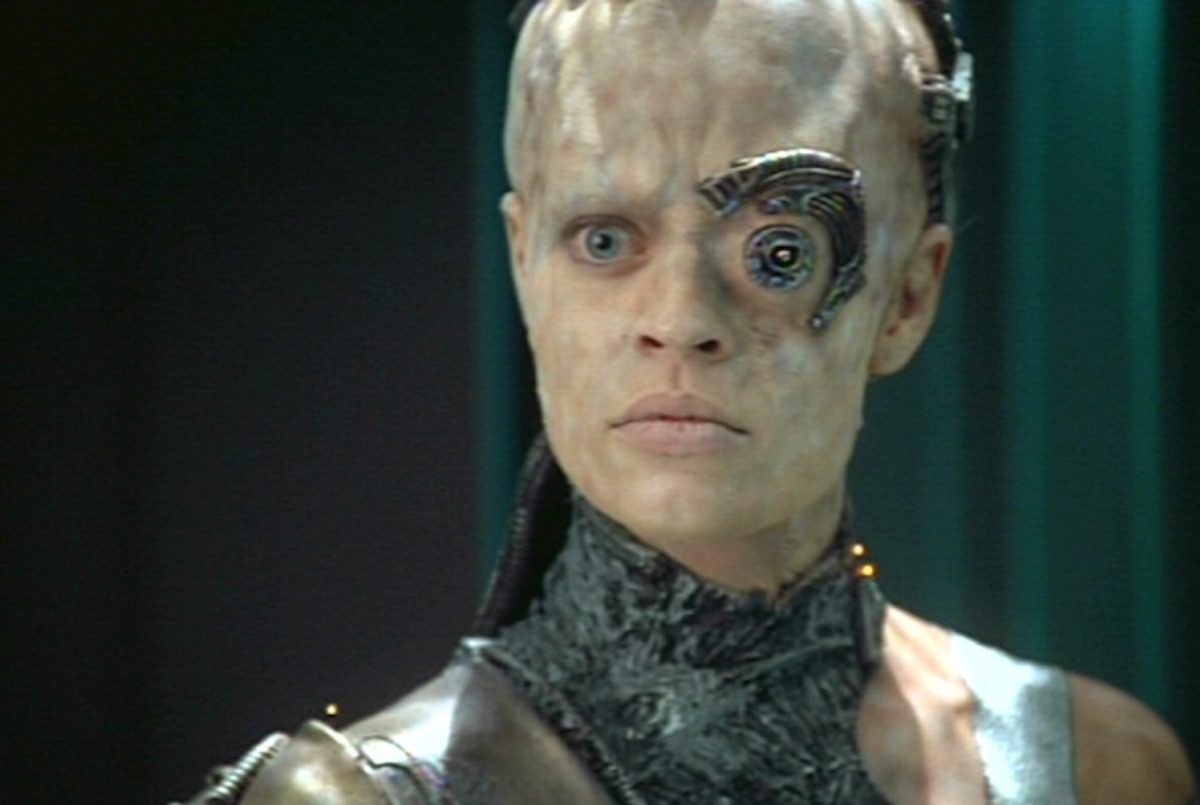 Over on Vulture, writer Devon Maloney has written an article in favor of the fan theory that Star Trek: Discovery is slowly revealing that the problem of rogue AI Control is actually the origin story of the franchise’s greatest villains, the Borg. I must respectfully disagree that this is a good idea.

Maloney’s essay is compelling, a nuanced argument for why she thinks Discovery is correct to be traveling this potential Borgian path. She gives us a deep dive into the Borg’s Trek history and cultural significance, rooted in their creation as an entity reflective of anxieties around technology in the ’80s and ’90s. An updated take on Discovery, argues Mahoney, would reposition the Borg for our era:

Because let’s be honest, the Borg’s pursuit of perfection bears an uncanny resemblance to Silicon Valley’s obsession with productivity and efficiency. Transhumanism in pop culture is on the rise, and culturally we’re becoming more and more comfortable with the idea of marrying the organic and inorganic. When it comes to explaining how a computer program might become powerful enough to raze countless intelligent civilizations, no faraway robo-planet could possibly make more sense in this era, or be more impactful on the Star Trek mythos, than “a machine-learning threat-assessment program created by a lawless Space CIA realizes sentient life is the ultimate threat and starts taking matters into its own hands.”

Maloney’s not wrong in putting forth this supposition for a modern-day Borg. Her take is fascinating and persuasive. I wish she wrote for Discovery! My problem, however, is that it’s hard for me to believe this sort of deft philosophical reflection was on the minds of the Star Trek: Discovery writers if Control is, indeed, meant to be the Borg’s retconned origin story. I see it more like a “Dude, what if we totally invented the Borg this season?” with resounding high-fives around the writers’ room.

Star Trek: Discovery is generally not given over to delicate writing, and it can wield its one-liners and morality plays with the subtlety of an anvil. It’s difficult to imagine that they’re bent on considering the current-day sociopolitical ramifications of the Borg’s villainy (if indeed Control is a sort of proto-Borg).

Too often, Discovery seems to grab for what is bright and shiny in the history of Trek and glom onto it. What’s Star Trek‘s fan-favorite alien race? Klingons! Let’s reinvent them and make them our first-season antagonist. Who is Star Trek’s most beloved character? Leonard Nimoy’s Spock. Let’s make our protagonist his sister and throw Spock into the cast for good measure. What’s the key to season 1’s mystery? The ever-popular mirror universe! Who should be this season’s captain? What about Christopher freakin’ Pike? What’s that in the sky? It’s a bird, it’s a plane, it’s the USS Enterprise. And on and on.

Don’t get me wrong: every Star Trek series—and certainly the reboot movies—have leaned on the nostalgia of those that came before, and built from the worlds and people previously established.  My problem is that condition is so stark on Discovery, a show still struggling to tell us who its main bridge crew are beyond “smart” and “good” and “sometimes sad.” I find myself desperate for Discovery to create more that is just its own, to spend time developing new characters and their backgrounds rather than letting fanservice drive so much of the show’s momentum. I like Discovery; I just think it’s capable of being better, and referential callbacks have become tiresome.

To be fair, Discovery struck out on its own with this season’s Red Angel/time travel/7 signals plotline—but if that all adds up to the reveal that Control is how the Borg began, I feel exhausted rather than elated. Maloney argues that if the Borg are coming, Discovery has utilized “a newfound narrative restraint in building up to this reveal.” And it’s true Control has not yet droned “YOU WILL BE ASSIMILATED.” It did, however, speak the words “struggle is pointless” on last week’s episode, which is running “resistance is futile” through a thesaurus.

In my opinion, Discovery shouldn’t get too much credit just for managing not to show its entire hand or scatter its cards across the table in a fit of pique. It’s worth mentioning that the Borg have also more than had their time in the sun—see Voyager, Star Trek: First Contact—and there’s little about the idea of hanging out with them again that appeals to me. Their unknown origin was an interesting puzzle best left unsolved. Even in our era of reboots, not everything needs to be rebooted.

I hope that the show will let the Borg, in all their mysterious inception, remain that way. I guess we should count our blessings that at least the Red Angel wasn’t revealed to be Seven of Nine come to warn Discovery from the future.