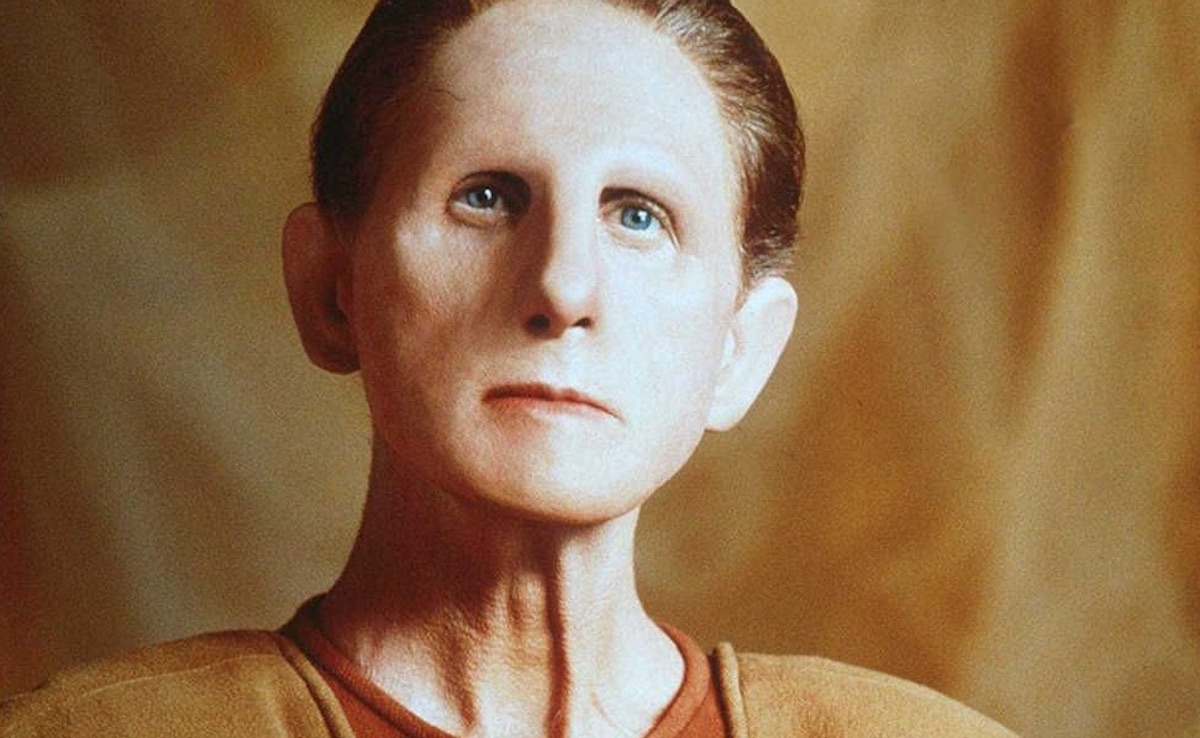 The Star Trek community is reeling from the loss of the wonderful René Auberjonois, who played Constable Odo on Deep Space Nine for seven seasons. Alongside many admiring fans, members of the Trek creative family took to Twitter to pay tribute.

As I scrolled through Twitter last night, incredibly sad about the loss of our Odo, I was just about keeping it together until this appeared:

It is with great heartache and loss I share with you the passing of dear,dear Rene Auberjonois.His last message to me was entitled “Don’t forget…” I know that I,Kitty,and all that knew him will never forget.The world seems noticeably emptier now. I loved him.

Armin Shimerman played Quark, the perpetual thorn in Odo’s side who was also, despite Odo’s protestations, his dear friend. The odd couple dynamic the two actors played up over the course of DS9 was a masterclass of subtle comedy and the complexities of emotion and character. Quark and Odo were about as polar a pair of opposites as could be—and so they were drawn to each other. Their offbeat friendship remains one of the best things about Deep Space Nine, and the actors’ offscreen closeness has been evident for decades. Shimerman’s heartfelt tribute here was perfect.

Odo’s most poignant relationship was, of course, with his love and longtime friend Kira Nerys, and actress Nana Visitor seemed at a loss for words.

I love and respect Rene more than I can say right now. This beautiful soul. My heart. Oh pic.twitter.com/ohNOq0c0Si

Also writing in with a touching tribute was actress Terry Farrell, who played Jadzia Dax.

I cannot express how much you meant to me. I will truly miss you my dear colleague, mentor, father figure, friend. pic.twitter.com/zE9TeyOzf5

Jeffrey Combs, known as Weyoun on DS9 (and many more in Star Trek history) had this to say:

And from DS9 showrunner Ira Steven Behr, no words at all—only a memory.

Many other Star Trek creatives praised Auberjonois to the skies.

May ⁦@reneauberjonois⁩ RIP he was one our finest actors and an even better man. I always looked up to him and I will continue to. pic.twitter.com/yPjwCjvnZM

This is a terrible loss. Star Trek fans knew him as Odo from Deep Space Nine. We knew him as René. He was a wonderful, caring, and intelligent man. He shall be missed. When I look out to the stars, I shall think of you, friend. https://t.co/IE2gtivRcg

Rene was a great artist, a great man, and a great friend. He will be forever missed by all that knew him. Goodnight Sweet Prince.

@reneauberjonois You were a spectacular artist from Altman film IMAGES to Star Trek:DS9 and the million performances in between. A devoted family man, a visual artist, and loving and loves le human being. Thanks for showing the world how to do it. #love #admiration

Stunned to hear of the passing of @reneauberjonois So very sad at this moment #ripRenéAuberjonois #Odo #StarTrekDS9 He was always a class act and a consummate professional. He and his acting talent will be greatly missed. pic.twitter.com/kJtT8EjKFl

So very sorry to hear… Rest In Peace, Rene. https://t.co/YH7iyhYpwq

GUT PUNCH! One of the absolute GREATEST! He did it all, stage, screen, drama, comedy and excelled in everything. So grateful for him and his work. Goodnight, legend…#reneauberjonois https://t.co/VTDGN5KgeS

I am very sad to hear of the passing of René Auberjonois. His work on Deep Space Nine was especially inspiring to me as I approached being in a Star Trek show. And I was delighted to get to spend time with him at STLV, where I learned he was a totally delightful human being. RIP

I am so sorry to hear that the wonderful René Auberjonois has passed away. I had the great honor to play his daughter on Boston Legal. My thoughts and prayers go out to his family, friends, and his many fans. May he rest in peace. ❤️ pic.twitter.com/eRxwfmmkcy

Rene Auberjonois 1940~2019.
A beloved member of our Star Trek family, among so many other decorated achievements on stage and screen. But above all, one of the sweetest humans I have ever met.
May he rest in God’s peace.#ReneAuberjonois #RIP pic.twitter.com/mK0aua9beV

AS GREAT A SHAPESHIFTER AS AN ACTOR AS ODO HIMSELF, RENE AUBERJONOIS HAS REJOINED THE GREAT LINK, AND I WILL FOREVER BE GRATEFUL FOR EVERYTHING HE HAS GIVEN US pic.twitter.com/i73d1pYgUB

I have just heard about the death of my friend and fellow actor @reneauberjonois. To sum up his life in a tweet is nearly impossible. To Judith, Tessa & Remy I send you my love & strength. I will keep you in my thoughts and remember a wonderful friendship with René.

Many, many, many fans have been expressing similar sentiments; this is a tiny sample.

Rest easy, René — you made my time with DS9 the most emotional television experience of my lifetime. 🖖💔 #startrek #DS9 #ReneAuberjonois https://t.co/S4CiLshigT

#ReneAuberjonois, the wonderfully talented actor who is known best for his role as Odo (a Changeling) from #StarTrekDS9 has passed away. Thank you, sir, for the years of enjoyment and entertainment you have given us. #RIPOdo pic.twitter.com/5LtQeii9TQ

René will always be our Odo. 💔 He’ll be missed terribly. pic.twitter.com/YJkQvVc9eR

I learned today, after his death, that #ReneAuberjonois would tell people who wanted to thank him to make a donation to @MSF. How wonderful. I’m donating today, in his memory, and I wanted to tell you, in case you want to as well. https://t.co/rgrFQzrgGD

It’s been a tough year of losses in the world of Star Trek, with DS9’s Auberjonois and Aron Eisenberg, the legendary writer DC Fontana, and last night The Next Generation actress Marina Sirtis announced the sudden death of her husband. Hug someone you love today. But on days like this, I’m grateful for social media, which can be petty and vicious, instead being used as an outlet for an outpouring of praise, grief, and affection.

By every single account I’ve seen thus far of Auberjonois, he was as warm and lovely a person as he was talented an actor, and an ardent supporter of many charities, especially Doctors Without Borders. (My favorite trivia tidbit I’ve learned about his dazzling biography is that his great-great-great grandmother was Caroline Bonaparte, youngest sister of Napoleon.) We have lost one of the greats, and a true class act.  If you need me, I’ll be watching DS9’s “Necessary Evil” on repeat. Good night, sir.

“Then this is the way I want you to remember me.”

My tribute to Odo and Nog, and their wonderful actors @reneauberjonois and @AronEisenberg #DS9 pic.twitter.com/Zs6gzmhBZk