Interview: Costume Designer Stacey Battat on the Subtle Changes and Antique Look of The Beguiled 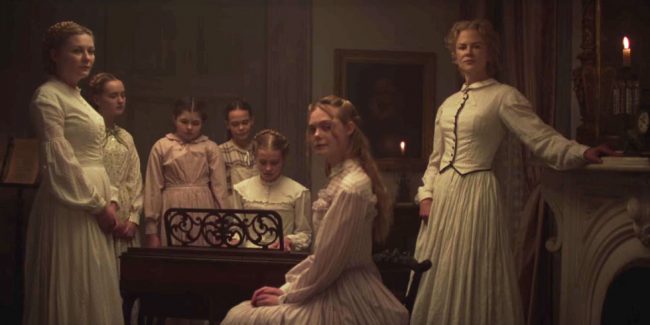 Stacey Battat has worked with Sofia Coppola on The Bling Ring and Somewhere, and her outfits in collaboration with the work of production designer Anne Ross and cinematographer Philippe Le Sourd create an atmosphere that feels distinctly Coppola-n in The Beguiled.

Pastels and soft colors reminiscent of a daguerreotype give this period film a sense of Southern Gothic, something I’ve expressed hesitance with in the way the film obscures slavery. At the same time, I enjoyed this film while fully acknowledging these elements and found the way it captures female desire and sinister seduction fascinating. The team sat down to create a world that was “old and flowy and mossy” with “an airiness to the clothes.” 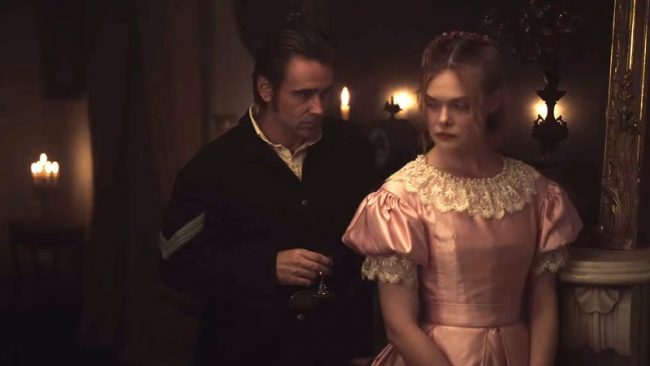 We talked about the styles for each of the characters:

“Colin Farrell‘s uniform is meant to be authentic looking,” she explains, “and the other clothes that he wears we just kind of thought perhaps the brother or whoever lived in the house before, some of their clothes were there. Because they didn’t go to war all on their own, there are leftover things in the house”

Elle Fanning‘s character is a young girl who’s bored of her childish classmates and starting to push boundaries. Battat says she “wanted her to feel like her mom still bought her clothes for her.” In pink and lavender, “she’s obviously not a little girl, but we still want to project and idea of innocence.” However, as Fanning’s character starts to express interest in Farrell’s wounded soldier, Battat also wanted to suggest “something kind of naughtier, details of an unbuttoned shirt and wearing her hair long distinguished her a little bit”

Miss Martha, played by Nicole Kidman, runs the school. “With Miss Martha, I wanted to have her feel like she looked more severe and stern,” she explains. “We did that by putting her in not so many colors. She wore mostly black and white and the silhouette of one of her dresses is the silhouette of a vest of the period. To the modern eye it feels a little more masculine. There’s some value in that, I suppose, in making her seem like she’s in charge.”

Kirsten Dunst‘s character, in contrast, feels like a character out of a perfect romance. Though Dunst’s character is a teacher to the young girls and ward to Miss Martha, she’s “not really an adult,” Battat explains. A meek, beautiful woman from a decent family with no romantic experience–her early interactions with Farrell’s John McBurney speak to this naivete. However, we all know that The Beguiled is not one of those stories. “I think of her character as more romantic,” says Battat, who gave her an  “ethereal quality.”

When I ask Battat about her favorite outfits, she names Fanning’s ruffles outfit, Miss Martha’s black and white polka dots, her light green dress and Dunst’s black and white dress. This movie is full of pastel period pieces that match the film’s airiness. The lighting in particular is full of candles and pre-electricity ambiance, drawing out the full, dated design. “All the buttons are old and I tried to use as much antique lace as well,” she says.

Clothing in The Beguiled tells a real story, as the film is all about how these female characters change with the presence of the male character, Colin Farrell’s John McBurney. “Their demeanor definitely changes when he arrives,” Battat says.”It’s very subtle how they transform after he comes, but it’s within the broaches or small details. One character wears a striped little bow in her dress, there is an extra tightening of corsets.” The female characters don’t have a lot of luxury, she points out, “they didn’t have a lot” so it’s slightly embellished details rather than ostentatious changes.

The setting of a girl’s school in the middle of the Civil War especially means Battat was referencing old books about manners and etiquette. “There was this incredible book I bought, it’s called The lady’s guide to perfect gentility, in manners, dress, and in conversation, in the family, in company, at the piano forte, the table, in the street, and in gentlemen’s society.” Ways to hold dresses, “ladylike” behavior, etc. as powerful signifiers of femininity for the characters, especially show in the detail and gender presentation.

The Beguiled comes to theaters this Friday, June 23rd.