The White Femininity of Sofia Coppola's The Beguiled | The Mary Sue

Southern Gothic, Slavery, and the White Femininity of Sofia Coppola’s The Beguiled 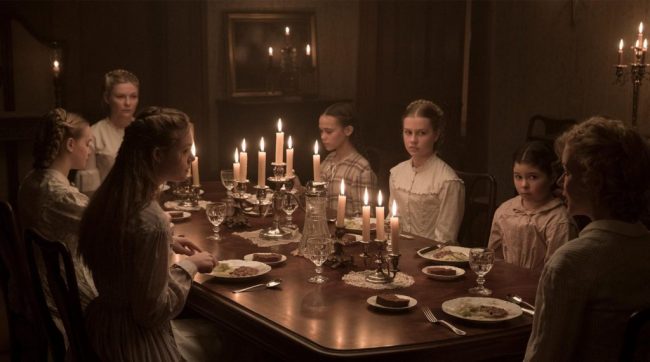 Erasing people of color in favor of white female narratives is neither empowering nor feminist. This feels like a common misstep we’re seeing often nowadays, in the ways Hollywood will, say, cast a white woman in a role that’s traditionally played by a woman of color and cry female empowerment or white-wash a character because they don’t want to repeat racist tropes. The truth of the matter is, this practice does little to nothing for women of color.

Which brings us to The Beguiled and Sofia Coppola’s decision to erase the character of Hallie and most references to slavery in her tale about Confederate woman during the American Civil War. In the 1971 film, Hallie is a slave played by Mae Mercer who tends to the injured solider The Beguiled house takes in, but her role is mostly absorbed into that of Nicole Kidman’s Miss Martha. The only notable reference to slavery is a line in the beginning that tells us the slaves have left, and the women are alone.

In an interview with  Buzzfeed and former TMS-er Alanna Bennett, Coppola said:

“I didn’t want to brush over such an important topic in a light way. Young girls watch my films and this was not the depiction of an African-American character I would want to show them.”

Coppola notes that she’s not opposed to telling more racially diverse stories in the future, saying “I feel like you can’t show everyone’s perspective in a story. I was really focused on just this one group of women who were really isolated and weren’t prepared. A lot of slaves had left at that time, so they were really—that emphasized that they were cut off from the world. [Hallie’s] story’s a really interesting story, but it’s a whole other story, so I was really focused on these women.”

To be fully honest, I don’t know how equipped Coppola would have been to approach this story. It’s clear that it’s not one she wanted to tell. With a filmography that’s so invested in white femininity and white characters (implicitly or explicitly), I have some doubt that she would have handled it well. What I will argue, however, is that The Beguiled is a story that depends and relies on slavery despite never including a single black character, and erasure is not an acceptable alternative to challenging and difficult representation. Even if Coppola asserts she “wasn’t really looking at the political aspects,” they are inescapable in this story.

These characters are not just women, they are Confederate woman. They proudly assert their southernness, emphasize “southern hospitality,” and their Confederate allegiance as Christians. Miss Martha interacts with Confederate soldiers with kindness, clearly taking a side. These gender dynamics are absolutely racial, whether we choose to acknowledge that at all. The “Southern belle,” especially, is a figure that romanticizes the economic prosperity that rises from slave labor—she cannot exist without the slave. Their so-called “proper” femininity cannot be separated from that of the black woman, as invisible as she is in the film.

I recently listened to one woman’s account of visiting a plantation in the south, and her anger at the ways the tour only spoke about architectural history, “economic savviness,” and the beauty of the location. The fact that it was built on the backs of enslaved bodies was only a footnote to it all, much like it is in much of our country’s history. I cannot help but compare this with Coppola’s film, which is so invested in the beauty and manners of the history with so little of the ugliness it depended on. 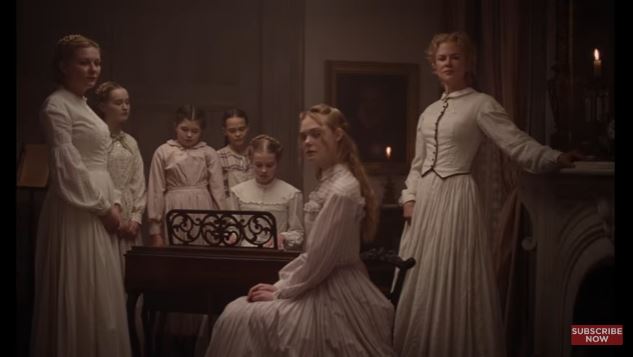 The way that The Beguiled looks at the gender dynamics of this group of women is, genuinely, beguiling. Watching Colin Farrell as John McBurney charm each of these women in different ways—with trust, subservience, or promises—is its own kind of curious seduction. He sees into the desires of each of these girls and women in a frightening way, and when he turns on them it’s thrilling to see them fight back. The way it handles suspense, repression, and atmosphere is a slow, mesmerizing burn.

This is a beautiful film, but you can’t help but note the ways that airy romanticism also serves to obscure and abstract. Without being fully confronted with the truth of slavery, we get to erase a layer of sinister menace to these characters. It makes it easier to ignore the complicity of these women in one of this nation’s most shameful acts of violence that we’re still struggling with today. However, any person of color watching this film won’t be able to write away these elements, just as they can’t go on a plantation tour without thinking about how those buildings got there. That’s a luxury afforded to the white woman who Pinterest plantation-themed weddings. It’s the privilege to avert your eyes from the ugly truth and say: isn’t that lavender beautiful?

The pastel eeriness of the girlhood home in the American South isn’t separate from the history of slavery either. The genre that Coppola evokes, the American Gothic, comes with an instinctive reaction and connotations built over time within our culture, one that appears with the eerie South. In a sense, the way The Beguiled depends on a suppressed and unacknowledged history is not a new phenomenon within fiction.

In Teresa A. Goddu’s “Introduction to American Gothic” from Gothic America, she writes:

“Arguing that America does have enough history to sustain the gothic’s challenge, the American gothic [can be situated] within specific sites of historical haunting, most notably slavery. American gothic literature criticizes America’s national myth of new-world innocence by voicing the cultural contradictions that undermine the nation’s claim to purity and equality. Showing how these contradictions contest and constitute national identity even as they are denied, the gothic tells of the historical horrors that make national identity possible yet must be repressed in order to sustain it.”

That atmosphere rises from the discomfort of a hypocritical and contradictory national identity, one that preached freedom while also enslaving others on the basis of race. This haunting of The Beguiled never fully lifts even at its conclusion. I’m not trying to completely write off the movie, but if you do see The Beguiled I hope non-black readers will keep this in mind and interrogate the way we constantly divide gender and race as if they aren’t inseparable. The first step to that is recognizing whiteness and resisting the idea that white womanhood may stand in for all woman.