Unbeatable Squirrel Girl Getting Her Own Graphic Novel 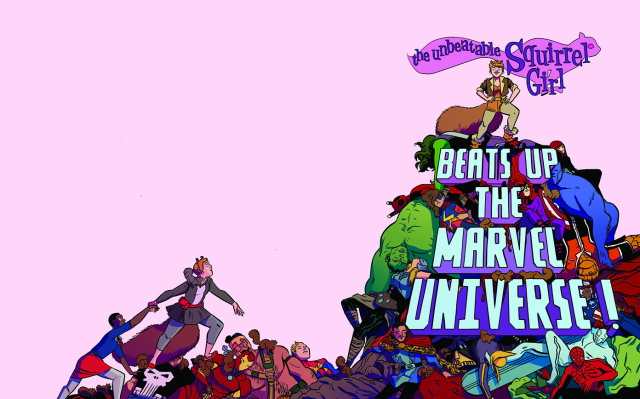 Marvel Comics celebrated the fact that they have 20 female-led titles this year in their standing-room-only Women of Marvel panel at C2E2. In that panel, they announced that one of the more popular female-led titles, The Unbeatable Squirrel Girl – written by Ryan North and drawn by Erica Henderson – is getting her own original graphic novel later this year!

THE UNBEATABLE SQUIRREL GIRL BEATS UP THE MARVEL UNIVERSE! OGN
Written by Ryan North
Art and cover by Erica Henderson
Proof that we’re living in the best of all possible worlds: THERE’S GONNA BE A SQUIRREL GIRL GRAPHIC NOVEL!
It’s a stand-alone adventure that’s both great for new Squirrel Girl readers, and also for people who ALREADY know about how she can talk to squirrels and also punch really well!
Behold: a story so HUGE it demanded a graphic novel! A story so NUTS that it incorporates BOTH senses of that word (insanity AND the weird hard fruit thingies) (they’re fruits, did you know that?) (I didn’t until I looked them up just now, so looks like we’re all learning science from this solicit text for a comic book!)
Squirrel Girl has defeated Thanos, Galactus, and Doctor Doom. TWICE. But in this all-new graphic novel, she’ll encounter her most dangerous, most powerful, most unbeatable enemy yet: HERSELF.
Specifically, an evil duplicate made possible through mad science (both computer and regular) as well as some Bad Decisions. In other words, SQUIRREL GIRL BEATS UP THE MARVEL UNIVERSE!

TUSGBUTMU (you know, that acronym’s, like, barely any shorter) comes out in October! Will you be picking it up? Which of Marvel’s female-led titles are your favorites? Tell us in the comments below!