“Sensitive Squid” More Likely to Live Longer, and to Be a Great Band Name 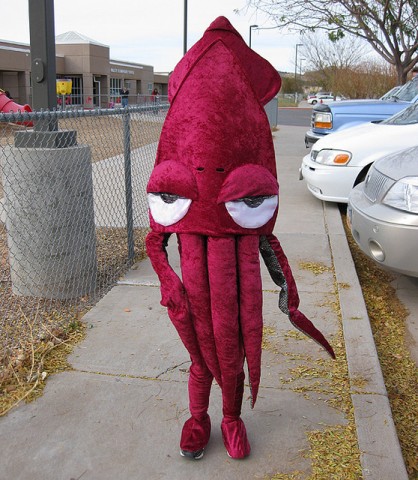 Wonder why your squid friends won’t come to another calamari cook-off with you? Turns out they’re once bitten, twice shy: a study published today in Current Biology says that squid have a biological imperative to remain sensitive after painful experiences. But is a life lived in fear truly living, guys?

Many pain researchers and clinicians consider long-lasting sensitization and associated pain to be maladaptive, rarely considering whether it might be evolutionarily adaptive […]this study provides the first direct evidence for the plausible evolutionary hypothesis that sensitization mechanisms—which in some animals are known to promote pain—have been shaped by strong evolutionary selection pressures, including pressures from predators.

Walters and his team studied the interactions between squid and their black sea bass predators in laboratory tanks. Measuring a squid’s threat-level is facilitated by a “stepwise and quite stereotyped sequence of defensive behaviors” that first author of the study Robyn Crook says the creatures perform when they feel vulnerable. The team noticed that a squid’s defensive behaviors were triggered more easily if it had already been injured in a previous attack (sound applicable to your personal life? Yay, evolution!)

To determine the impact that pain had on squid’s preparation for future attacks, the team gave some injured research subjects anesthetic that prevented their nervous system from recognizing their injuries. Squid whose pain had been numbed prepared less well for future attacks than their suffering counterparts and were more likely to die.

Crook hopes these observations could lead to a better understanding of how humans register pain:

If we can understand more about what the natural, ‘intended’ purpose of nociceptive sensitization is, we might be in a better position to find new ways to treat its pathological expression in humans.

Unlike our tentative tentacled friends, it’s probably safe to say that every painful experience that humans develop lingering sensitivity over won’t kill us. Although, I wish I could spray ink everywhere the next time someone breaks my heart.

(via Phys.org, image via Bryan Jones)