The annual Sports Illustrated Swimsuit Issue has historically been the gold standard for the straight male gaze in this country. Since, of course only men like sports, and men are only attracted to women, every year they trot out a special issue in which the manly-men who care about manly sports get to have a side of female cheesecake with their sports reporting. However, the issue’s current (female!) editor, MJ Day, is hoping to flip the script.

This year’s Swimsuit Issue is due out next week and will feature, among other things, a nude photo spread shot by a female photographer, Taylor Ballantyne, and an all-female crew called “In Her Own Words.” In it, the models hope to force readers looking at them for their beauty to acknowledge their humanity by painting words they’ve chosen to sum themselves up on their naked bodies.

They’re not trying to not be sexy. They’re saying, my posing in a sexy way doesn’t make me less of a human being. I deserve respect no matter what I’m wearing, or whether or not I’m wearing anything at all. This is in line with Day’s mission, along with her all-female core creative team on the issue, to make the 2018 Swimsuit Issue “a magazine where models were as much participants as objects.”

They’ve had that mission since last year, and started nudging the magazine in that direction with this photo, which closed out 2017’s Swimsuit Issue: Now, the models aren’t only posing in the photos, but they’re controlling the content, and participating in the creation of the images. For example, newbie model Sailor Brinkley Cook (daughter of supermodel Christie Brinkley) is also a full-time photography student, so she was offered the opportunity to work on the crew. Meanwhile, Robyn Lawley, a returning model, is featured in the shoot, but she also worked as the director of photography for a behind-the-scenes video that will air on Sports Illustrated TV.

It was so important to Day for these women to feel comfortable in creating their own images, that she actually left the set during the day of the shoot. She tells Vanity Fair, “One part was to allow the model to be her own creative director. I worried that if I were on set, they would start to model for me, and do what I wanted to see, rather than what they wanted to be represented as.” 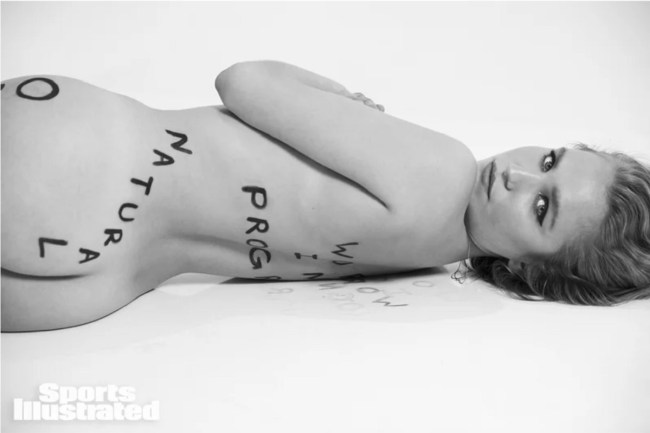 Brinkley Cook appreciated the opportunity to be able to create something that was so unfiltered. “It was really special to be a part of this and get to express myself in a very raw, uncensored way,” she says in an interview with Swim Daily at Sports Illustrated’s website. “Having these words written all over your naked body and having that next level of exposure — I felt sexy obviously but I felt more emotional and it helped me accept myself.

Meanwhile Lawley (who can be seen in the video above, and in the featured image for this post on our homepage) is a mother, and appreciated the fact that this shoot features models of different ages and body types as an example to her young daughter. “We are women and we are human,” Lawley says. “We have stretch marks. We have rolls. We have cellulite. That’s all part of our bodies. We become so obsessed with our exterior message; we give no thoughts to what’s in our heads. I just want all those girls out there to know they are so beautiful and so special.”

Even before the #MeToo Movement caught fire all across the country, Day, who’s been editing this issue for four years, has always prioritized ensuring that every model she works with feels safe and cared for on set. However, in the time she’s had this position, her ideas about what this issue could be about and accomplish has changed. As Vanity Fair reports:

[Next week’s 2018 Swimsuit Issue] will be the culmination of a shift in her thinking that’s happened over her time at Sports Illustrated, that the images could be a place where different standards of beauty could be celebrated. Traveling and shooting on location put her in situations where she was talking about bodies and the idea of beauty with people from vastly different cultural backgrounds.

“Everybody had a different person that they related to or thought was the most exciting,” she said. “Those people were dark, light, big, small, tall, thin—it was not one type of person. I always carried that with me . . . Why are we only saying to ourselves that there’s just one type of person that’s worthy of being celebrated? It’s bullshit, and we all know it, and we all live it, yet it’s continued to be propagated in the media.”

The “In Her Own Words” shoot is the centerpiece shoot in the issue this year, but there will obviously still be sexy swimsuit photography of all types.

However, the types of models have diversified significantly during Day’s tenure. There are models of all different races and ethnicities, as well as all different body types. Yes, even plus-size models, with Ashley Graham and Hunter McGrady holding it down. From the sound of it, Day is interested in diversifying even further.

However, “At the end of the day, we’re always going to be sexy, no matter what is happening,” Day says. “We’re Sports Illustrated Swimsuit. The ideal is to create something artful, to create a beautiful image that both the subject and the team is proud of and collaborates on together.”

In other words, it’s about the subject of the photo being respected and having agency.

I’ll admit it, when I first saw the info about this upcoming Swimsuit Issue, my knee-jerk reaction was to roll my eyes. Commodified feminism to sell the male gaze to the masses, blah-blah. But the more I read what the models themselves had to say, watched videos on the Swim Daily page where they talk about their experiences—particularly the one above featuring golfer Paige Spiranac, whom we’ve covered here before—and read about the process, the more I see that this is as genuine a subversion of a historically male-gazey thing as is possible.

Yes, they’ll give you sexy. And the brain, as they say, is the body’s largest and most powerful sex organ, so they’re going to make you think as you gaze.