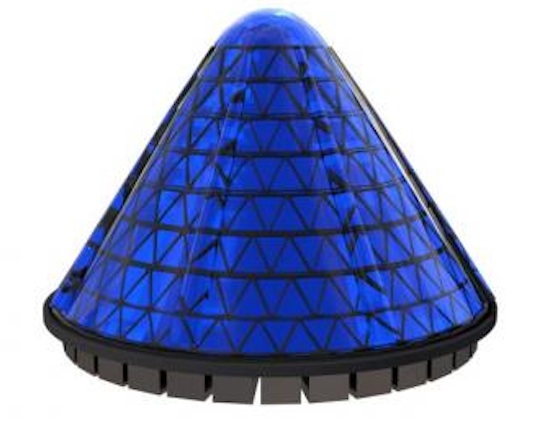 A new solar cell company is boasting that its one-of-a-kind solar panels (they are blue and pretty and cone-shaped and spinning!) are more than just eye-candy, and could boost solar production twenty fold over conventional flat panel solar cells. Sounds too good to be true, right? Well, yeah, probably, but it’s an intriguing new design for an industry that could really do with a kick in the pants about now, so let’s learn more, shall we?

Despite being cheap and plentiful, there are a lot of things that make solar a less-than-ideal means of generating power. It’s not as reliable as we would like it to be. It’s often geographically inconvenient, having to travel long, expensive distances from where it’s gathered to where it’s used. Perhaps most frustratingly, old-school photovoltaic cells just aren’t all that efficient right now, while directing heat and light to solar cells while also managing not to burn them out is a trick no one has mastered quite yet.

All those things are getting better, but just incrementally. That’s not a reason to give up on the idea. In fact, it’s a really good opportunity to remind ourselves that transforming the way power is produced and distributed around the world is a Herculean task that requires our patience, but it is frustrating to sustainable energy proponents and policymakers.

V3’s spinning cells are hoping to be a giant step forward for the industry by addressing the problem of boosting energy intake while preventing overheating. That’s why they spin, letting every cell get a lot of extra light for just a little while. Since it spins at a predetermined rate, solar farms could shed expensive and unwieldy sun tracking software and hardware.

We love this idea in principle, because it sounds like a simple, elegant, and even attractive solution to a confounding problem, and who doesn’t want to believe in something like that? Here’s the thing, though: An energy increase of magnitudes of order is a big claim to bandy about, and naturally needs to be taken with a grain of salt. The V3 cones will take a little of that juice right off the top to power the electromagnet inside each one that keeps them spinning and prevents burnout. Even after that — well, a twenty fold boost just sounds too good to be true, right?

But even a significantly more modest boot in energy production — say, four or five times the production of current generation cells — would be a huge boon, right? Well, that depends. No one seems to know what these cells will cost when they hit the market, so actual efficiency will have to be figured out after accounting for what’s sure to be a bigger initial investment in these new cells. How do we know it will be a much bigger investment? We don’t, exactly, but look at it this way: You know how when you see a menu for a fancy restaurant without prices next to any of the entrees, you understand that you can’t afford it? That principle holds true at pretty much every level of finance. If someone won’t tell you how much a thing costs, it costs a lot.

We’ll have to wait until all the facts are in — by which we mean until pretty much any of the facts are in — to see if these new cells live up to the big promises they’re making, but they seem very much worth keeping an eye on. We have to admit, on a purely aesthetic level, we’re totally digging the idea of seeing these things pop up on city streets in the interest of making our life look just a little bit more like a sci-fi film.