Well, it's better than Real Housewives. 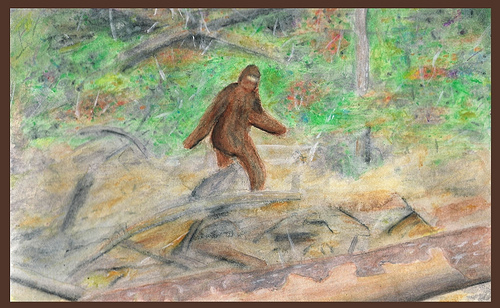 The elusive Bigfoot has been waiting to be discovered all along, it just needed a Spike TV reality competition show to be made about it. At least that’s what the producers behind “Ten Million Dollar Bigfoot Bounty” are counting on.

Friday night will now forever be known as Bigfoot Night, after last week’s premiere of the aptly named show.  Spike equipped nine teams of Bigfoot trackers and big game hunters with a group of scientists and set them loose in Pacific Northwest wilderness in search of the elusive Sasquatch. The team left standing eight weeks from now with the most conclusive evidence of Bigfoot’s existence will then be awarded a ten million dollar prize, making it one of the largest prizes to ever be offered on a reality show.

We’re intrigued by the show because 2014 is certainly shaping up to be The Year of The Bigfoot. The show is funded by Lloyds of London (The world’s specialist insurance market), and actually boasts some scientific credibility. Biological anthropologist Todd Disotell is on hand as a consulting scientist to provide DNA verification for any evidence the teams turn in. What kind of evidence?

“Basically, I said I wanted biological material. So, I got lots and lots and lots of feces,” says Disotell in an interview with The Huffington Post. Teams also collected hair and even insects like mosquitoes from the area. Disotell is able to set up his lab equipment in the remote locations where the teams are hunting and tell they their poop didn’t come from bigfoot.

Primatologist Natalie Reagan is the other scientist on the show. As someone who researches spider monkeys, she’s there to help the hunters know what to look for when trying to find a sasquatch.

It seems like the show is trying to take itself as seriously as possible. That’s no doubt a challenge when the show in question is a Spike TV reality show hosted by Dean Cain that’s offering $10 million to find Bigfoot, but hey, at least they’re trying.