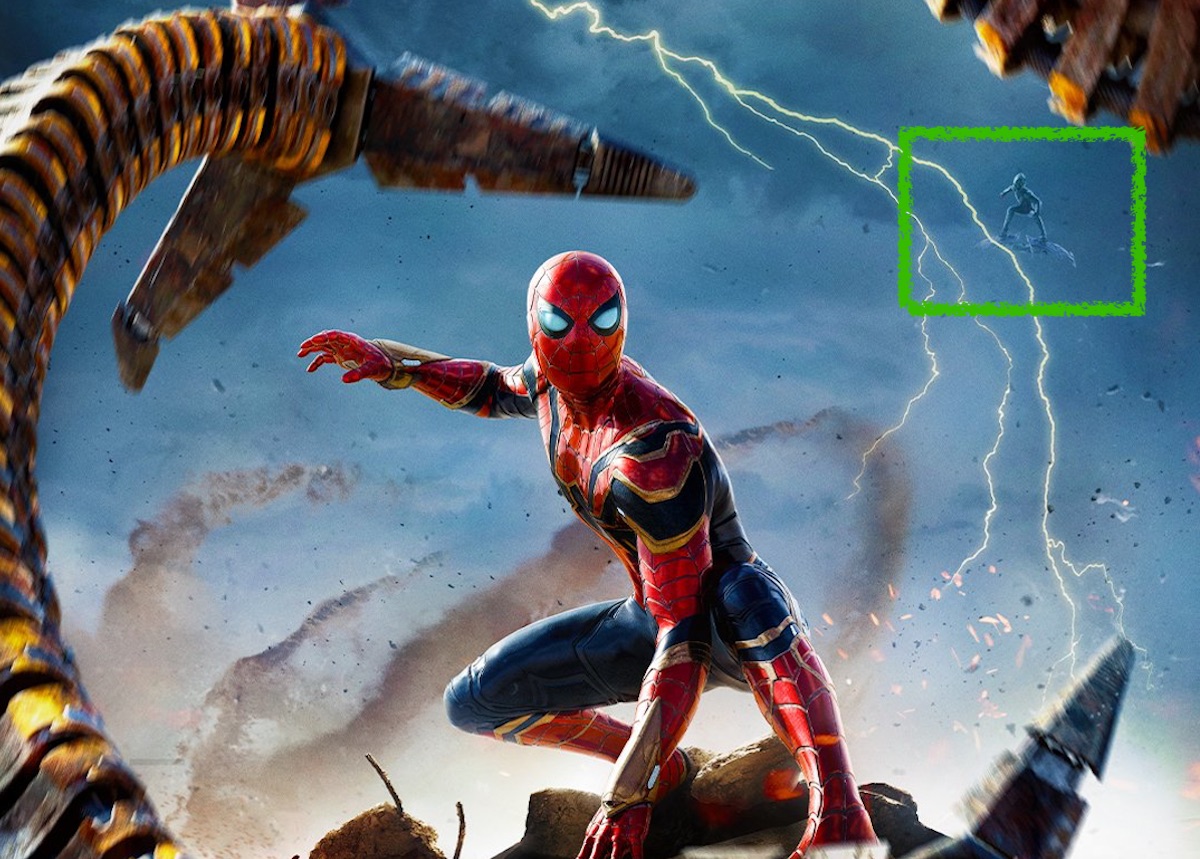 A new official poster for Spider-Man: No Way Home teases the classic supervillains that Peter Parker is going up against. For the full picture, we’ve got to zoom in.

The dynamic poster draws your eye to the return of Alfred Molina’s Doc Ock—it’s impossible to miss those menacing tentacle arms. But the No Way Home poster reveals even more villainy with a closer look. On Twitter, the Spider-Man movie account urges fans to hunt down the details:

go ahead, zoom in on those details 👀

After many, many months of teasing, we appear to have received confirmation that at least four of the Sinister Six pack of Spider-Man villains will take on Tom Holland’s Peter Parker in the multiverse-spanning movie.

These are villains that appeared in previous iterations of the Spider-Man film franchise (with varying degrees of success). While Molina’s epic Doc Ock was shown in the trailer, the poster definitively portrays a far-off Green Goblin flying on his goblin glider.

In the Tobey Maguire Spider-verse, the original Green Goblin, Norman Osborn, was played by the unparalleled Willem Dafoe. Dane DeHaan had fun playing Osborn’s son Harry Osborn in The Amazing Spider-Man 2, and also there was the time James Franco did that. Dafoe’s signature cackle was heard in the No Way Home trailer, so we hope he’s the main Goblin we’ll be revisiting.

Additionally, some other details on the poster hint at Jamie Foxx’s Electro via that crackling yellow lighting. Electro was the primary antagonist of the underwhelming The Amazing Spider-Man 2, starring Andrew Garfield as the titular webslinger. It’s not Foxx’s fault that the movie’s script was sorely lacking, and I’ll be thrilled to see him get another chance to show us what his Electro can do. Foxx is a talented actor and Electro, a.k.a. Maxwell Dillon, is an interesting character that could be fascinating with the right script.

And finally, the swirling sand in the poster suggests the presence of The Sandman, an antagonist in Spider-Man 3 (Spidey-Maguire again). The shapeshifting Flint Marko can also wield sand like a mighty fist and was played by Thomas Haden Church, who is rumored to be returning to the role.

At this point, with this poster in hand (and tentacle), Marvel Studios seems willing to confirm these big-name villains coming back after so much speculation. But Peter’s encounter with the mulitverse means there are surely a ton of surprises on the way, and this could only be the start of the newfound foes and friends who will enter the scene. 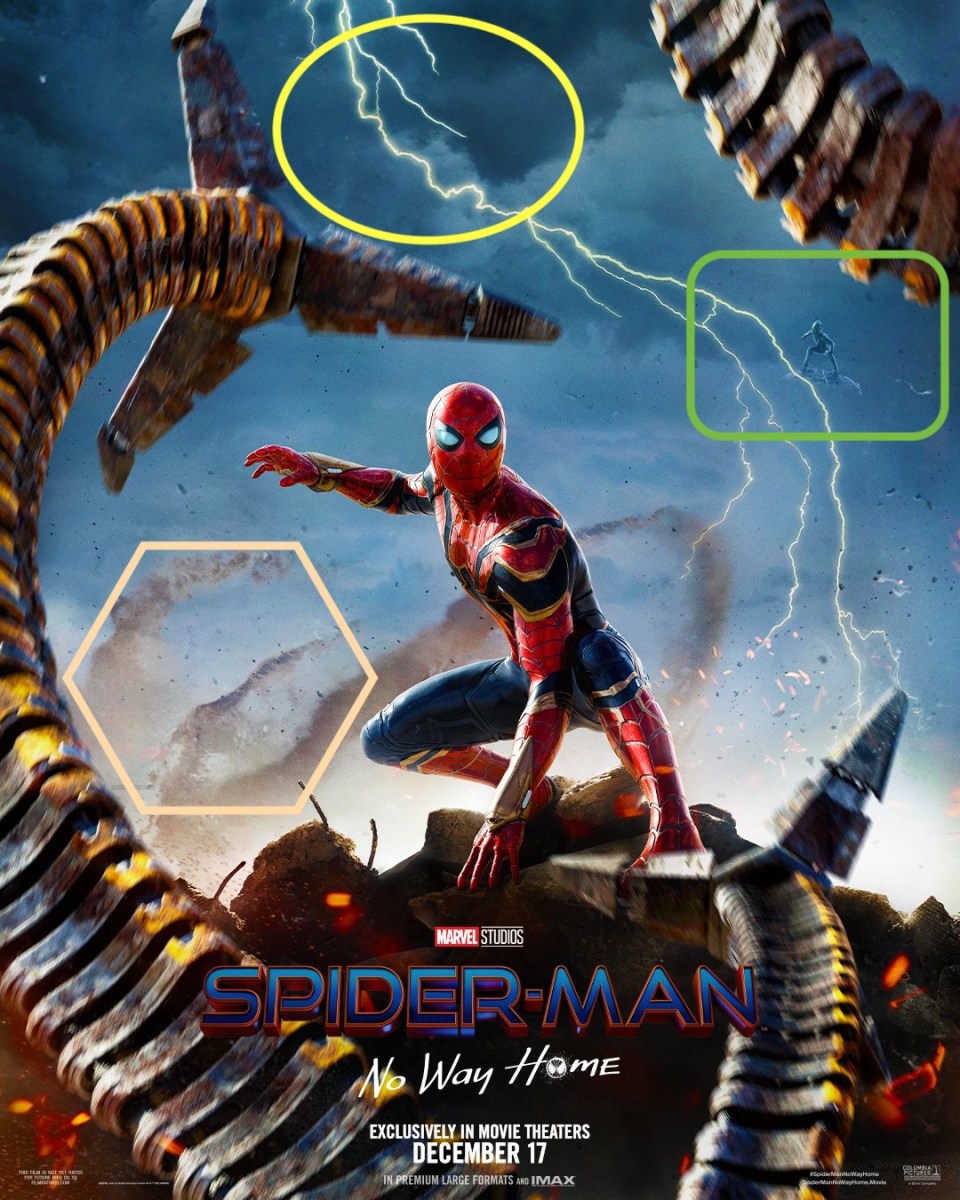 With four of the Sinister Six seemingly accounted for now in No Way Home, the question remains if we’ll be seeing the whole half-dozen. If so, this would mean the return of Vulture (played excellently by Michael Keaton in Holland’s first solo go-round, Spider-Man: Homecoming) and Scorpion, aka Mac Gargan, who appeared in an end-credits scene in Homecoming played by actor Michael Mando. Fans have theorized that a mysterious antagonist spotted on a LEGO set could be Scorpion.

Peter sure does seem to have his work cut out for him here. Now if only there were a few other friendly neighborhood Spider-Men who might be able to swing in and help out …

Directed by Jon Watts (who directed Homecoming and Far From Home), and definitely starring Tom Holland, Zendaya, Benedict Cumberbatch, Jacob Batalon, Marisa Tomei, J.K. Simmons, Benedict Wong, and Jon Favreau, Spider-Man: No Way Home is in theaters December 17th, 2021. Both Molina and Foxx are officially listed on the movie’s IMDb page. Who will be next?