A Spicey in the streets. 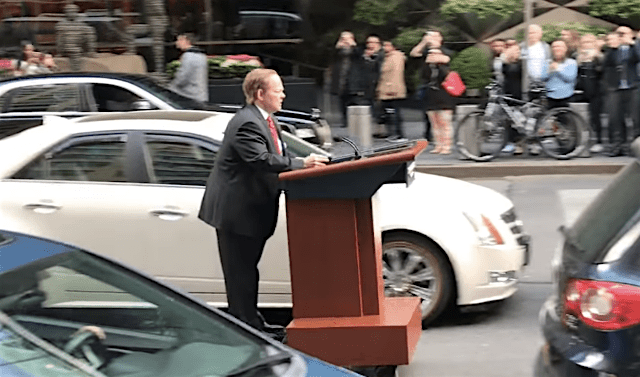 Earlier this week, Saturday Night Live released its first promo for this weekend’s episode, hosted by Melissa McCarthy. Did you watch it? I hope you watched it. Here it is again, just in case you missed (or want to relive) the wonder that is McCarthy’s musical number transformation into Sean “Spicey” Spicer.

I don’t think I’ll ever get tired of watching that.

Now we’ve been given another SNL gift, in the form of Melissa McCarthy, dressed as Sean Spicer, rolling the White House podium down the streets of Midtown Manhattan.

Spicey is clearly not a fan of the questions being asked by this traffic.

That sidewalk video of McCarthy shooting a single take of whatever prerecorded segment this ends up being is already more entertaining than about 98% of last week’s abysmal episode. (Sorry Chris Pine, I love you, but your episode was garbage.)

The show most definitely has a lot of Spicey material to work with this week. We’re excited, and, the longer I look at this Instagram post from McCarthy’s account, terrified.

Potentially being replaced by Mike Huckabee’s daughter, the firing of the head of the FBI, having to hide in among bushes in an attempt to dodge reporters–it’s enough to make the Spicer of just a few weeks ago seem relatively carefree.