SpaceX Launches Inspiration4 Orbital Mission With Only Civilians Aboard

No astronauts? No problem! 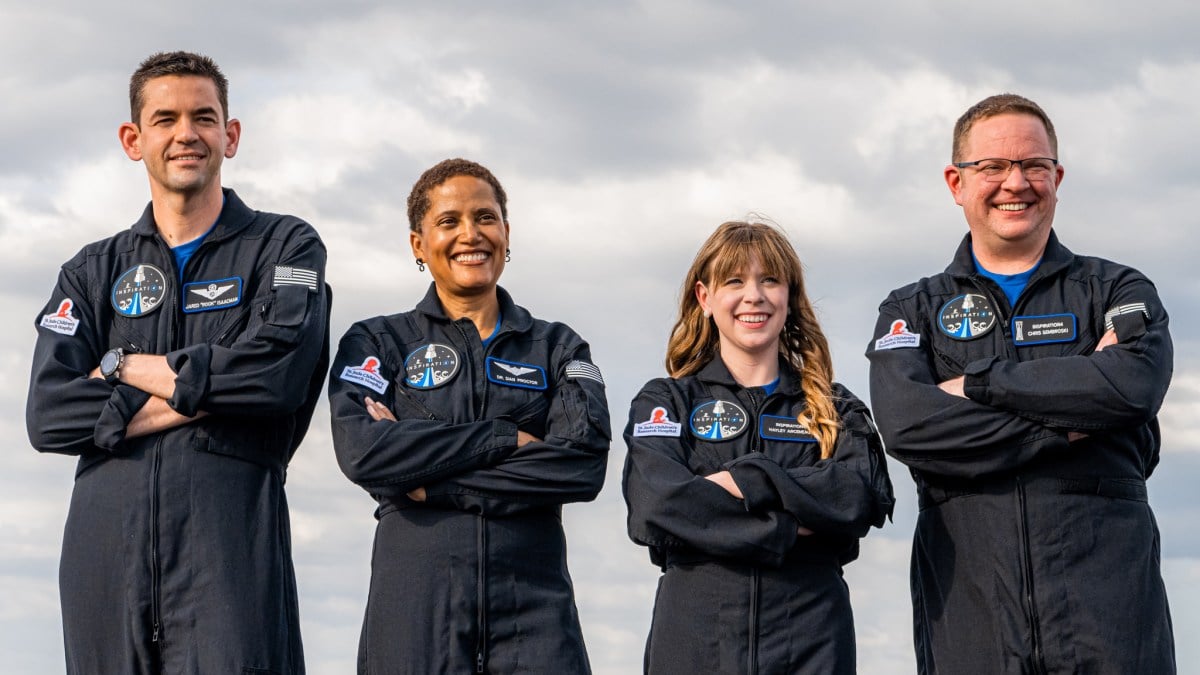 SpaceX made history today with the launch of the Inspiration4 mission: an orbital flight staffed entirely by civilians with zero astronauts aboard. While this may seem like the plot to a disaster movie, the lack of astronauts is intentional, as the company moves towards making space tourism a reality (for the very wealthy at least).

Inspiration4 launched last night from Kennedy Space Center on a Falcon 9 rocket and will spend 3 days orbiting the Earth at 360 miles up, 100 miles higher than the International Space Station and higher than the Hubble telescope, before an ocean landing off the Florida coast on Saturday.

The crew of #Inspiration4 is go for launch. pic.twitter.com/xou4rJJnjp

The trip was funded by Jared Isaacman, a 38-year-old billionaire and founder of Shift4, a payments processing service. Isaacman is additionally an experienced pilot qualified to fly military jets. And while he could have brought along his fellow billionaires for the ride, he instead chose three civilians: Hayley Arceneaux, a 29-year-old child cancer survivor who is currently a physician assistant at St. Jude Children’s Research Hospital in Memphis, the same hospital where she was treated as a child. Arceneaux will be the youngest American ever to space travel, and will be the first person in space with a prosthesis, a titanium rod in her left leg.

“We set out from the start to deliver a very inspiring message,” Isaacman said during a news conference, “and chose to do that through an interesting crew selection process.” Isaacman is using the groundbreaking mission to raise money for St. Jude, but declined to reveal how much he spent to fund the Inspiration4 mission. He has pledged $100 million to St. Jude and is working to raise another $100 million in donations thanks to a raffle sweepstakes to win a seat on the flight.

Over 72,000 people entered the raffle, which was won by an undisclosed person from Embry–Riddle Aeronautical University. That person bowed out for personal reasons, giving his seat to fellow entrant U.S. Air Force veteran Christopher Sembroski, a 42-year-old data engineer in Everett, Washington.

They will be joined by Dr. Sian Proctor, a 51-year-old community college professor and education outreach officer who will be the first Black woman to pilot a spacecraft. Proctor was an education outreach officer for the first Hawai’i Space Exploration Analog and Simulation (HI-SEAS) Mission. She also appeared on Discovery Channel’s The Colony Season 2 and the PBS series Genius By Stephen Hawking. Proctor won her seat on the flight via a competition that rewarded the best business idea to make use of Shift4’s commerce solutions (Shark Tank in space, basically).

While billionaires Jeff Bezos and Richard Branson launched their own flights to the edge of space, those flights were mere minutes long, quickly returning to Earth. In contrast, Inspiration4 will spend a few days in space, and will be traveling the farthest from our planet since the Apollo moon missions of the 1970s.

While in orbit, the crew will do research on human health and performance, with applications for human health on Earth and during future spaceflights. “The crew of Inspiration4 is eager to use our mission to help make a better future for those who will launch in the years and decades to come,” said Isaacman. “In all of human history, fewer than 600 humans have reached space. We are proud that our flight will help influence all those who will travel after us and look forward to seeing how this mission will help shape the beginning of a new era for space exploration.”

If you want to learn more about Inspiration4, Netflix is streaming a five-episode docuseries Countdown: Inspiration4 Mission to Space, which follows the crew through training and their mission.