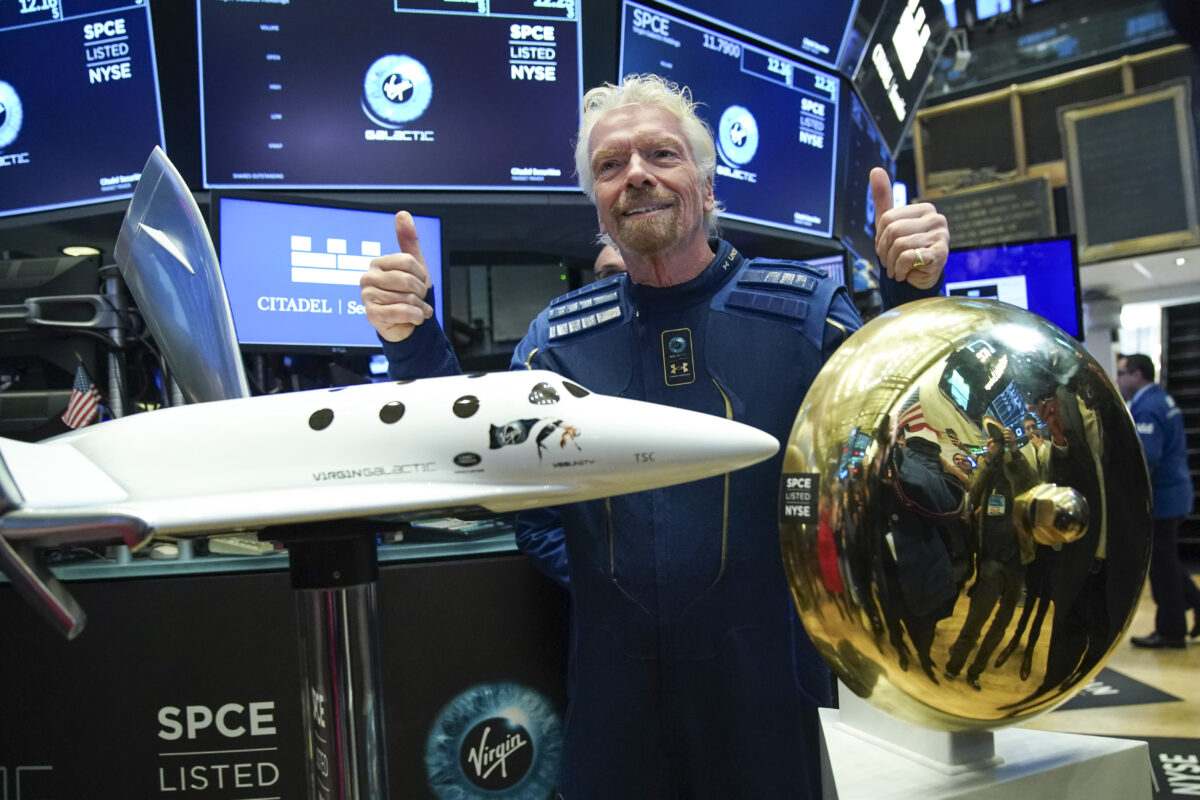 The forests are burning. The ocean is on fire. The Pacific Northwest heat dome has cooked over 1 billion clams, mussels, and other forms of marine life.

But don’t worry, the billionaires of the world have banded together to launch an interstellar dick measuring contest. And it looks like Virgin CEO Richard Branson is the first billionaire to successfully launch his space tourism gambit.

Today, Branson became the first person to fly into space aboard a rocket he helped fund. The rocket in question is the SpaceShipTwo, a supersonic space plane developed by Branson’s company Virgin Galactic. The launch, which successfully took place early this morning in New Mexico, saw Branson, along with Virgin Galactic employees Beth Moses, Colin Bennett, and Sirisha Bandla and pilots Dave Mackay and Michael Masucci, reaching the edge of space.

"To all you kids down there…" – @RichardBranson's message from zero gravity. #Unity22

The SpaceShipTwo, a winged plane with a single rocket motor, was attached to a massive twin-fuselaged aircraft named WhiteKnightTwo. The space plane then detached from the mothership at an altitude of about 8 1/2 miles (13 kilometers) and fired up its engine, reaching more than Mach 3 (three times the speed of sound). At the top of the flight path (more than 50 miles high), the passengers experienced zero gravity for a few minutes and could observe the curvature of the Earth. The plane then deployed its unique feathering system, where the wings of the plane curl upward, in the shape of a badminton shuttlecock. The plane then glided back down for a successful runway landing. All in the all, the rocket plane flight took only 15 minutes.

“To all you kids out there — I was once a child with a dream, looking up to the stars. Now I’m an adult in a spaceship…If we can do this, just imagine what you can do,” Branson said during the livestream of the flight.

Branson was originally scheduled to take his maiden voyage later this summer, but moved up his flight after Amazon founder Jeff Bezos announced that he would ride his own Blue Origin rocket into space from Texas on July 20, marking the 52nd anniversary of the Apollo 11 moon landing.

Branson’s launch featured the signature fanfare that the billionaire is known for, with Stephen Colbert emceeing the event and singer Khalid performing his new single, “New Normal”. Of course, we’d expect nothing less from the man who kite-surfed the English Channel.

But the one-upmanship between Branson, Elon Musk, and Jeff Bezos is about more than ego (although there’s surely plenty of that). All three billionaires are trying to stake a claim in the highly lucrative world of suborbital space tourism, which would offer the world’s wealthiest the opportunity for a brief jaunt to the edge of space and back again. More than 600 people have reserved tickets priced between $200,000 to $250,000 for Virgin Galactic’s first voyages. And with Branson’s flight a success, the company is expected to reopen ticket sales at much higher price points.

This is great news for the wealthiest 1 percent of the population that can experience galactic joyrides. And yes, technological innovation is always important. But I can’t help but think this is all leading to an Elysium-like dystopia where the wealthy live in a luxury space station while the rest of us boil down here on Earth.

But yay rockets and space! In the meantime, I’ll be looking forward to whatever budget space travel options are available on Hotwire or Priceline in the not too distant future.