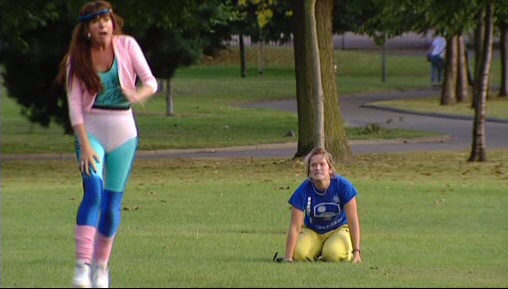 What this episode of Spaced does so brilliantly is, after spinning it’s characters in opposite directions, it’s able to ravel them all back in by the closing moments in a way that makes sense. Their worlds are becoming more and more intersected with one another, and “Help” proves just that. It’s also an episode that shows progress for each of the characters. I wouldn’t go so far to say that by the episode’s end they’ve matured, but they’ve certainly put some effort into moving towards that goal.

Tim has received a call from Darkstar Comics asking to see his portfolio as a potential hire. However, his excitement is short lived when he realizes that Daisy accidentally put a crude cartoon he’d drawn of the company’s owner, Damian Knox, into the portfolio that’s already on it’s way to Darkstar. He and Mike both respond angrily, Tim understandably flustered and panicked but also a little irrational (it was only a mistake). He and Mike then must chase down Tyres (making a welcome reappearance), who has already delivered the package.

I love this plot. It’s fast paced and fun, incorporating a lot of the little details of the Spaced world that we’ve already become to recognize. Mike’s daydream of how they’ll recover the package, Tyres beginning to dance to any noise made by any common household appliance, to the characters getting along with security personnel when in other shows they’d be a nameless antagonist: all of these things are little facets of Spaced that have become common knowledge.

After a daring air vent adventure Tim does manage to get his cartoon back and even run into Sophie, Damian’s assistant. Flirting ensues. Tim is just about to make an escape when Damian ends up seeing his photo anyway, after having run-ins with the rest of the gang.

Brian is out to lunch with his mother, trying desperately to keep up the charade that he’s a lawyer, believing that she’ll think less of him if he reveals he’s an artist barely getting by. This allows for some fantastically subdued physical comedy by Mark Heap, who wears his suit like it’s two sizes too small. Ultimately the truth gets out, and his mother is absolutely fine with it.

They’re discussing his revelation on the walk home when they run into Daisy, Martha and Colin. Daisy and Martha have their own storyline this week, which is always an enjoyable pairing. Daisy begins the episode doing “research” on laziness which is, in essence, an excuse to be lazy. She’s told by both Martha and Tim that she needs to get up and do something, and after Tim reacts angrily to her trying to help with the portfolio, she agrees to join Martha on a jog.

It goes terribly. She had told Martha before that exercising is bad for her, and Martha, understandably, didn’t take her seriously. The two of them leave, Colin in tow, in two of the best work out outfits I’ve seen on television ever. Daisy has the wardrobe of someone who doesn’t work out often and threw together passable items to go out in, including a toeless sneaker. The run ends up causing Daisy to be competitive, knocking Martha out of the way with her elbows until the two both end up on the ground,exhausted from what should have been an easy jog.

Daisy tells her that she’s always been competitive and, in a clever sequence, we get a flashback through hand drawn cartoons, showing how she used to be a menace on team sports. It’s quite an excuse not to exercise and is fitting to what we know about the character.

This is all leading up to, when walking back, Colin runs straight forward into traffic, across from the street where Brian is walking with his mother, next to the road where Damian is driving back. Brian has a moment of flashback trauma remembering his dog getting hit by a car and saves Colin just as Daisy runs into traffic and is hit by Damian.

See, I love when a story is pulled together.

It was yet another wonderful episode of Spaced , one that used the racing against the clock motif that works so well in creating tension. It also saw the return of the “anger… pain… fear” gag which means that it’s an immediate win.