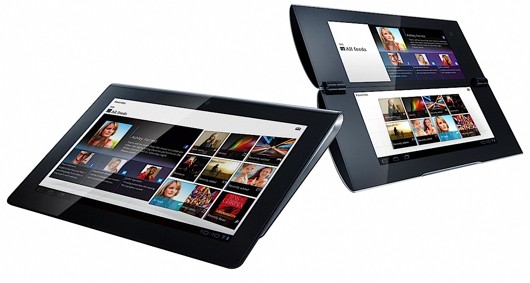 Even though Sony is currently experience a public relationship nightmare, that hasn’t stopped them from announcing their entrance into the tablet arena. The two tablets, dubbed the S1 and S2, will be running Android 3.0 Honeycomb, be DLNA-enabled, and will be capable of WiFi, 3G and 4G, as well as be PlayStation Suite enabled, which means they’ll be able to play select PSOne games, like Sony’s Xperia Play.

The S1 is the more standard of the two tablets, with a single 9.4 inch screen, though it does have a curved piece of plastic on the back of the device, similar to a folded-back cover, seemingly in order help keep the device naturally propped up, though one does wonder how the tablet will handle being put into a case.

The S2 tablet is the far more unusual tablet, as it has two 5.5 inch screens that fold into a clamshell design, similar to the past few generations of Nintendo handhelds. The screens will be able to function separately of one another, or team up and form a single display, but with a plastic separator between the two screens akin to the Nintendo DS. Oddly, both halves of the S2 currently contain rounded backs, most likely making it a little awkward to rest on certain surfaces, though Sony does admit the design is subject to change.

The devices are planned to hit globally this fall.

(via Joystiq and Ars Technica)