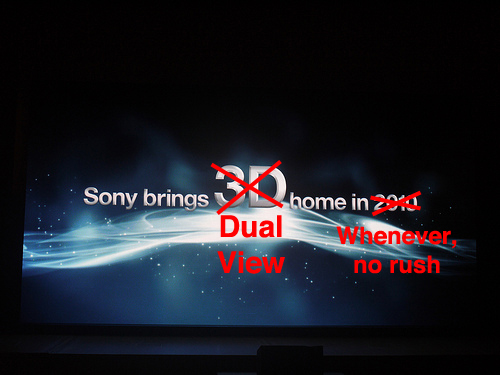 Mick Hocking, senior director for SCEE and director of World Wide Studio’s 3D Stereoscopic Team, demoed a “dual-view” concept–a technology Sony is currently developing where multiple people look at one screen, but each see a different image based on which side of the screen they are looking at. Of course, the first application that comes to mind is split-screen gaming where the two people playing in the same room no longer have to suffer under the oppressive thumb of only being designated half of the screen real estate for their multiplayer date nights. Dual-view uses the technology behind 3D televisions to achieve the effect.

Pocket-lint was lucky enough to experience the demo, and reports if a person is sitting directly in front of the screen, both images are viewable, unless said person closes one of their eyes, in which case, the corresponding image (leaving the left eye open will show the left image) will be revealed. The technology was demoed on Killzone 3, showing that while the tech doesn’t have any kind of release date or public schedule, it’s at least working with current media.