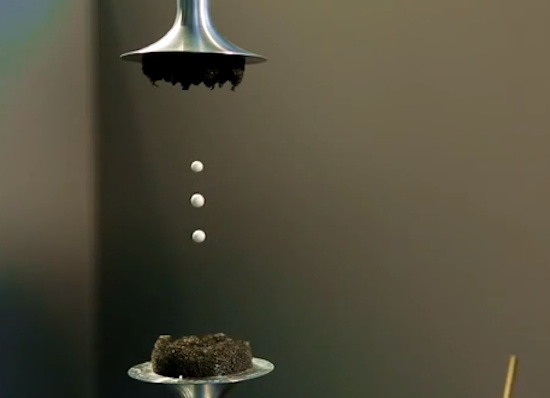 Nope, it’s not an illusion or a trick — that’s just what it looks like when you suspend particles of a liquid in mid-air using an awesome technique known as acoustic levitation. Those two pedestals are actually speakers, transmitting sound waves at 22 khz — just outside the range that humans can hear. By transmitting waves that interfere with one another perfectly, scientists can create points in the wave form where no energy is transferred, effectively canceling out gravity at that point, called a node. Pretty cool right? The video’s even better.

What’d we say? Is that not the coolest thing ever? We’ve pretty much just been sitting and replaying that thing again and again.

The gentleman manning the device, if you’re curious, is placing drug samples inside of it, to try and get a look at them with a high powered X-ray machine. Instead of testing the liquid samples of drugs inside of test tubes, where they can take on the shape of their containers and begin to crystallize, looking at the samples in suspension allows researchers to get a truer sense of their properties. The hope is that this improved understanding of the drugs would allow for changes that will makes them more effective at lower doses and dampening unwanted side effects.