Sombra Is Everything We Need in an Overwatch Hero

Even though the ARG wasn't too good. 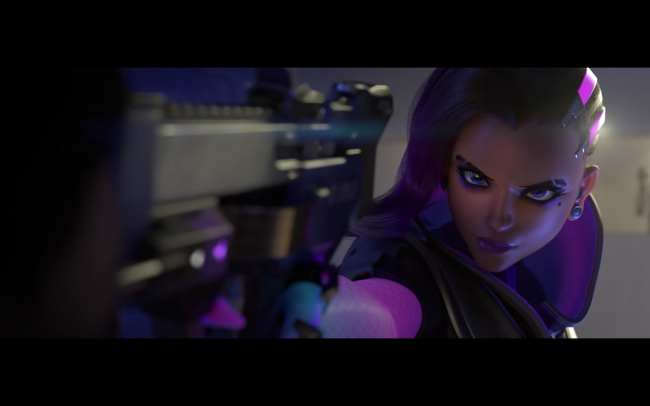 Today marks the start of BlizzCon, Blizzard’s big annual convention where they highlight and reveal some of their most hotly-anticipated projects of the year. One of those major reveals was an animated short titled “Infiltration,” which introduces the Sombra hero/character to the Overwatch world.

The short was done up in traditional Blizzard fashion with an incredible story backed by equally striking visuals. It tells the story of one mission involving Reaper, Widowmaker, and Sombra wherein they’re infiltrating Volskaya Industries, the backdrop for one of the maps in the core game. They’re there to assassinate its CEO, Katya Volskaya. Sombra is providing technical backup while Reaper and Widowmaker are in the field. Things eventually go wrong, and Sombra’s activated to complete the mission herself.

It’s with this premise that we’re shown how Sombra’s abilities are supposed to play out. She’s shown controlling large machines, using more close-quarters small arms, and can even use cloaking/invisibility to get around a map. I won’t spoil the short, but her ultimate ability is shown to be something of a surprise for both the characters in the short and those of us watching.

Character-wise, she’s incredible. She’s incredibly sneaky and mercurial in the sense that it seems to be impossible to tell just what she’s going to do in any given moment. Impish doesn’t even begin to cover her personality; she has fun with what she does, despite how obviously stressful the situation can be—she doesn’t take herself too seriously, and that’s a wonderful foil to Reaper and Widowmaker’s relative coldness.

More than all of that, though, she’s confident. Like many of the other women in Overwatch, she knows she’s the best at what she does, and doesn’t hesitate to exploit an opening. She’s exactly the kind of character that belongs in Overwatch, and she’s a great breath of fresh air in a continually developing diverse world. She’s smart, she’s strong, she’s got her share of flaws, and she’s totally into booping things.

I might not love the Sombra ARG (phew, what a mess) but if Sombra’s what we get for sticking it out through that, then I’m fine. I’ll be okay. If you’re at BlizzCon, then lucky you, you get to try out Sombra yourself on-site. The rest of us plebes will have to wait until next week when she makes it onto the Public Test Region.