Students Create Solar Bag That Purifies Water While You Walk 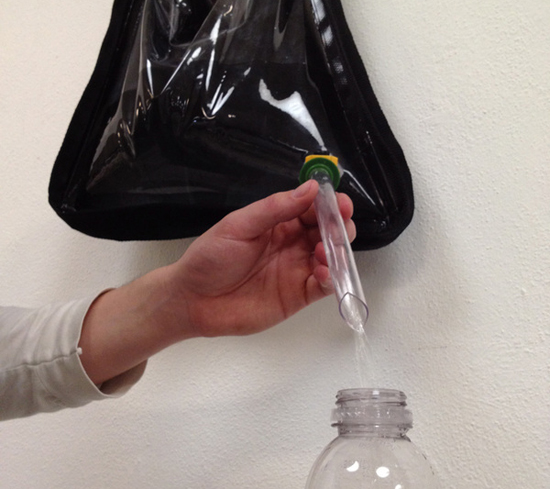 Water purification is a big problem in some places, like parts of Africa, where any kind of clean water is hard to obtain. Even then, people sometimes have to walk long distances to grab the water before they can start the lengthy purification process. Enter Ryan Lynch and Marcus Triest. These two industrial design students have created a “solar bag” that can start the purifying as soon as water is put in the container — even if you’re walking home.

The entire process relies on using ultraviolet rays present in sunlight to kill nasty bacteria that could otherwise cause sickness and even death in those that imbibe the water. Devices using this technique aren’t new, but many require electricity and nearly everyone approaches water purification as a thing you do once you arrive where you’re going. Lynch and Triest saw this as an unnecessary hindrance to those who need it most.

Their solution takes the concept to its natural conclusion: A container for the water that passively purifies it. One entire side of their watertight bag is made of clear polyethylene terephthalate, the same plastic found in soda bottles, to allow the ultraviolet radiation in. The other side is made of black plastic to trap heat and also bounce the ultraviolet light back through the water. All of this is attached to a sturdy nylon strap for carrying.

Perhaps the best part of their system is that it purifies two and a half gallons in six hours as compared to the far less amount treated in the same way over the same amount of time previously. They aren’t available commercially just yet, but if all their claims turn out to be true — like materials costing a mere $5 — then they surely won’t have to wait long.