Study: Water Wrinkles On Fingers May Actually Have A Purpose 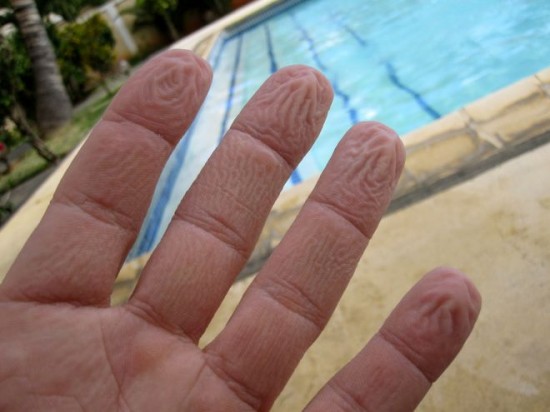 We all get them. The little wrinkles that turn our finger tips into raisins after time in a swimming pool or even just your daily shower. But why on Earth do we need “pruney” fingers? Evolutionary neurobiologist Mark Changizi from 2AI Labs in ID is challenging our common perceptions about the wrinkling of our finger tips. Contrary to popular belief that the changes in our fingers are caused by the absorption of water, Changizi believes the wet finger wrinkles may be a valuable adaptation that allows us to grip objects better under slippery conditions.

According to Changizi, the wrinkles may act like rain treads on tires, creating channels that allow water to drain away when our fingers are pressed against a wet surface. This would allow the fingertips to make more contact with the wet surface, thus having a better grip. But Changizi’s hypothesis is not without skeptics.

As evidence of his adaptation hypothesis, Changizi sites the fact that since the mid-1930’s scientists have known that water wrinkles do not form on fingers where the nerves are severed. This shows that the formation of water wrinkles are controlled by the nervous system. According to Changizi this suggests that the water wrinkles must be functional in some way, and he set out to find out exactly how.

In analysis of photographs of 28 wrinkled fingers published in the journal Brain, Behavior and Evolution, Changizi and colleagues observed the same patterns. Each finger had long unconnected channels that branch out from a point at the top of the finger. When fingers are pressed against a surface, pressure is applied from the tip down. The sides of the finger are where any liquid can easily fall away, but the flat part is where water will pool. The wrinkles that form on the flat part may be a response to the need to move water away from the area.

While Changizi’s hypothesis and evidence make logical sense, there are many researchers who are not convinced. An alternate explanation for the formation of water wrinkles may be that fingers immersed in hot water are subject to tightening of the blood vessels, and subsequently the tissue shrinks relative to the overlaying skin. But this does not explain why even cold water makes the fingers turn wrinkly, or why the fingers do not wrinkle if the blood supply is cut off.

The next step in proving Changizi’s hypothesis will be to see if other mammals living in wet habitats develop wrinkled fingers. He has already observed the phenomenon in bathing Japanese macaques. Tests are also planned to see if people with wrinkled fingers have better gripping ability under wet conditions. Preliminary results on these studies are just starting to roll in, but according to Changizi they are promising in support of his theory.