The Epic Snubbing of "Get Out" & Tiffany Haddish | The Mary Sue

The Epic Snubbing of Get Out and Tiffany Haddish at The Golden Globes—Can We Fix the Comedy Category Please? 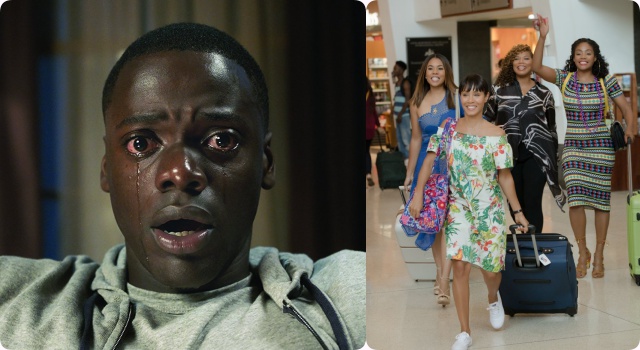 Last night was the 75th annual Golden Globe Awards which was filled with some incredible moments of female solidarity, huge failures of men who failed to speak up, and men with dubious pasts also being awarded or recognized.

When it comes to award snubs, it can be highly subjective. One person’s best movie of the year could be someone else’s garbage. Yet, I think if we look at the Golden Globes winners, losers, and nominees last night it is clear that something is rotten in Denmark when it comes to one film in particular: Get Out.

Last night Get Out was nominated for Best Actor in a Musical/Comedy, where Daniel Kaluuya lost to James Franco in The Disaster Artist, and Best Film Musical/Comedy which it lost to Lady Bird. Now, we’ve spoken here at length that Get Out is not a comedy, should not have been put up for nomination as a comedy, and that it is a damn shame that it wasn’t nominated for Best Director or Best Screenplay.

Despite how I may feel about James Franco, ie. he is gross and his wearing a Time’s Up Pin was epically hypocritical, his performance in The Disaster Artist is by all accounts an excellent comedic performance. Although it would have been awesome to have not given the man with a history of allegedly soliciting minors for sex an award, while also trying to show solidarity with victims, we have to remember Hollywood only cares about itself. Also, I loved the hell out of Lady Bird which is probably tied with Get Out as one of the best-reviewed movies of 2017.

Nominating Get Out as a comedy was probably done in order to give it a better chance to win an award, but I feel like that was a giant misstep. Not only is Get Out not a comedy or a musical, this puts it against movies that in their own right deserve to win that award. Considering one of the movies nominated for Best Drama was The Post I can’t help but feel like they kept spots free for their last-minute award bait darlings, even though Get Out is easily one of the top films of 2017 and The Post is a good, but cliche movie with a topical message and good acting.

The comedy/musical section is too often used to dump good movies that can loosely be placed in there as they have a better chance of winning there, rather than in drama. Which is ridiculous because comedy and comedic performances are hard to do. It is much harder to make people laugh than cry. Doing both at the same time is even more epic, and it means that people who should be recognized can be pushed out—like Tiffany Haddish.

Tiffany Haddish’s perfomance is easily one of the best comedic performances of the year and the fact she was completely snubbed is a total shame. What is the point of having a comedic acting category if you aren’t going to recognize comedians?

While I am extremely happy for the groundbreaking wins of Sterling K. Brown, Aziz Ansari, and Oprah Winfrey, it does not mean we shouldn’t call out how this entire system still fails to recognize films that do not fit outside of their already poorly arranged boxes.

(via The Guardian, image: Universal Pictures)