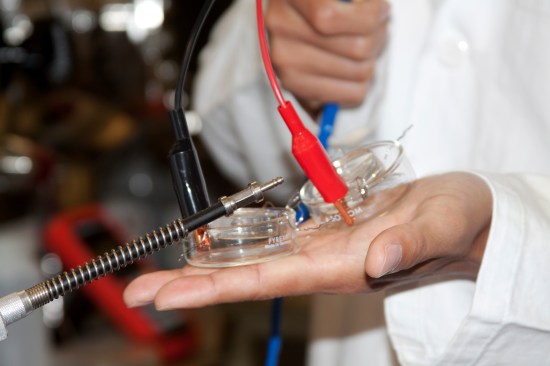 Now that the whole 3D craze seems to be ending, a new gimmick must arrive to take its place. Enter the University of California at San Diego team with their new research that could one day add scents to your media experience.

Here’s how it works, according to the UCSD article:

[The] team of graduate students used an X-Y matrix system in order to minimize the amount of circuitry that would be required to produce a compact device that could generate any odor at any time. The scent comes from an aqueous solution such as ammonia, which forms an odorous gas when heated through a thin metal wire by an electrical current. […] using the X-Y system, 200 controllers (100 on the X-axis multiplied by 100 on the Y- axis) would selectively activate each of the 10,000 odors.

In short, we’re talking about Smell-o-Vision.

The crux of the technology is the matrix of wires and chemicals creates something like a scent pixel; different odors that can be combined to create a whole panoply of smells. The device is fitted inside a flame-proof silicone housing that might someday be affixed to a television or other device. In their study, the researchers showed their ability to produce scents that were distinct and recognizable to a test audience.

But just because you can do something, doesn’t mean you should. Marketers might like the idea of spewing a flame-broiled scent all over your house while you’re watching Whopper Lust, but what kind of foul odors might an attack ad use? And with the networked nature of consumer electronics these days, how long would it take before some clever hacker figured out how to hijack the scent maker? As UCSD says on the subject of this technology’s future applications: “The possible scenarios are endless.”

The technology is certainly exciting, and a major hats-off to the research team behind it, but for now I’d like to keep Smell-o-Vision away from my home.