Slide To Unlock: The Game 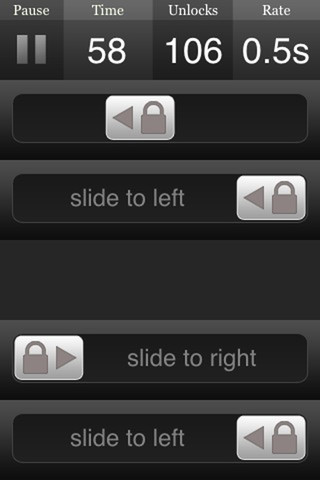 When I had an iPod Touch, the first thing I did after jailbreaking was replace my unlock slider with an unlock button. Apparently a lot of people out there are much more fond of sliding to unlock than I ever was; The Falco Initiative have actually turned it into an iOS game called Slide. It works pretty much exactly how you think it would. That is, you do a lot of sliding. What’s surprising is how deep the game seems to go with that simple mechanic.

Inspired in part by another, similar game called Slide to Unlock, Slide jumps down the rabbit hole by incorporating a strong competitive element. Using OpenFeint and Game Center, users can compare their scores against their friends’ in a variety of gameplay styles that include sliding over and over again, in multiple directions and sometimes simultaneously. It’s a far cry from subconsciously swiping at your screen to check your email.

It sort of sounds like a stupid idea, but at the same time, there is something appealing about it. I mean, how much different is this concept than a game like Fruit Ninja, which is essentially just sliding moving targets? Unsurprisingly, the game is only available for iOS, but it is free, so give it as shot if it seems up your alley. By all accounts, it’s far more addictive than it’s got any right to be, so just be prepared to waste a whole bunch of time sliding and unlocking high scores.

(The Next Web via Technabob)