SK8 the Infinity Sports Anime Was Made for Shipping, So Let’s Talk About It! 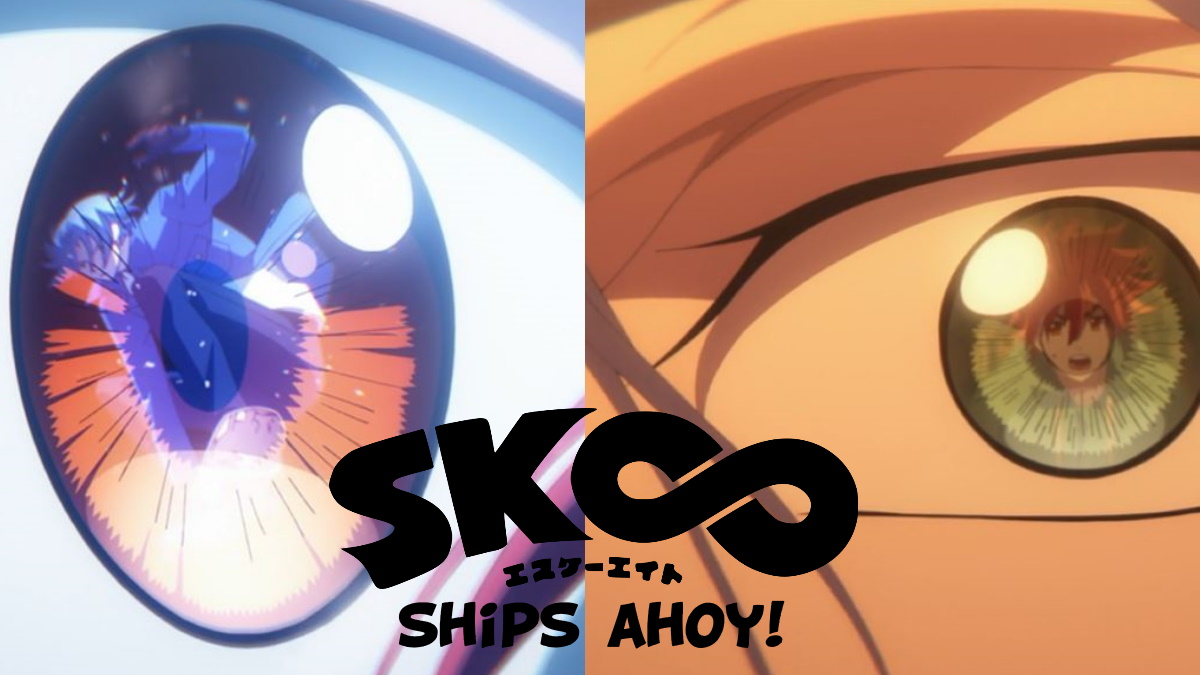 Can we talk about SK8 the Infinity ships, please?

Because after nine episodes of anime skateboarding antics that dares to be headed toward a RECAP episode after what happened in that ninth episode I kinda need to talk about my boys.

Shipping is just a part of the sports anime experience. That’s just how it goes. Sports anime is heavy on the emotional weight behind the sport in question, complete with themes of friendship, lifelong bonds, and plenty of conflicts that make you scream JUST KISS ALREADY.

SK8 the Infinity is no exception, as to be expected from Hiroko Utsumi (director for Free! and Banana Fish), but this series has been, well, way more boy’s love implied than I thought it would be. Characters calling their matches dates, bringing roses to said “date,” and the whole Adam and Eve reference aside (Adam, can you chill for two seconds, please?), there are moments where certain characters just can’t function, like, at ALL, unless if a particular character is cheering them on.

Oh, and the series himbo looks at this man: 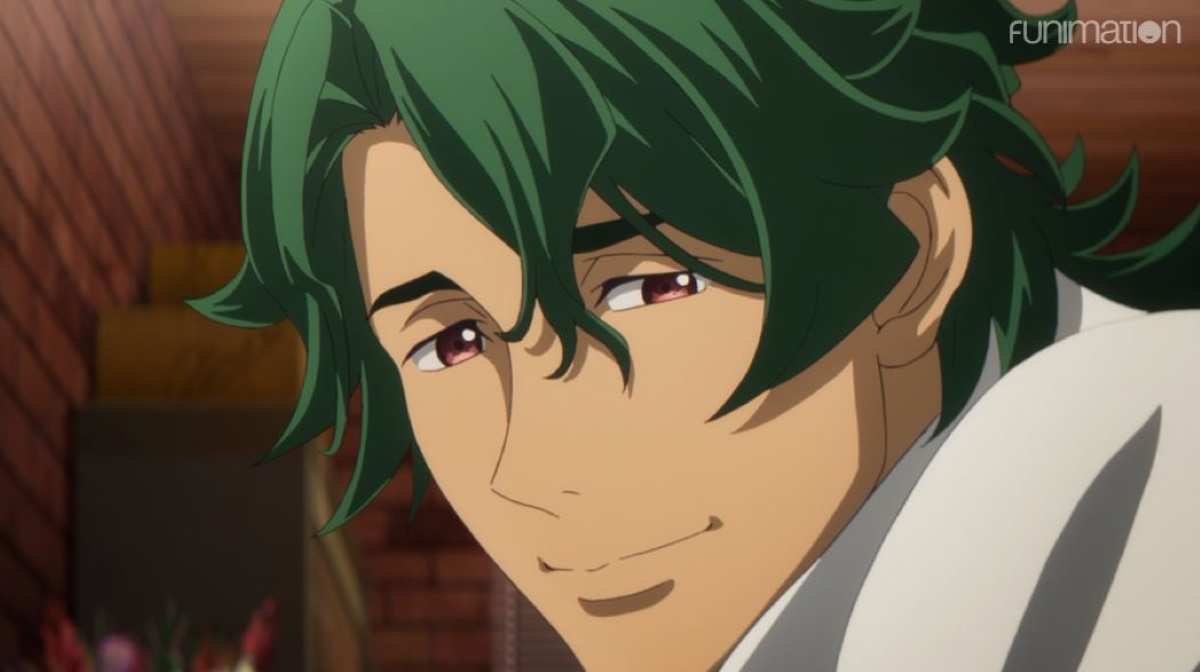 So I’m gonna dive into the ships, discuss the ridiculous amount of context for said ship, and bemoan the fact that we only have a few episodes left and it’s been weeks of rainy day angst. 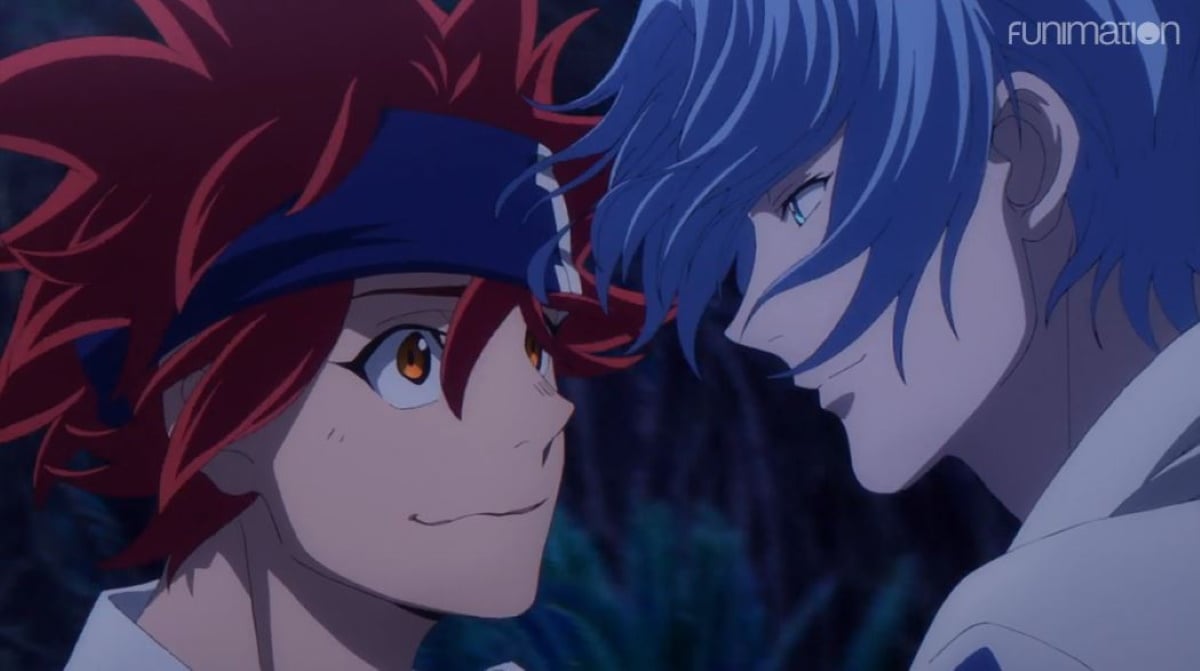 I knew this was gonna be the ship of the series. All you gotta do is watch the opening. Reki’s boy crush wonderment on the amazing new guy, Langa, and Langa’s quiet smiles over Reki’s excitement over skateboarding are the stuff sports anime ships are made of.

But it turns out SK8 had bigger plans for these two.

Before watching the series I thought Reki would be the skateboarding prodigy, especially since he ends up teaching Langa the basics. Turns out Langa’s the prodigy, which Reki’s actually fine with until people start making him feel insecure about his skills. I talk more about that in my anime round-up here, but as sad as I am about what’s going on with Reki, it’s extremely realistic and relatable. Reki just LIKES skateboarding, so much so that he can appreciate others who are out there doing it, at least, he could until everyone started making comments about him.

How quickly we lose love for things because of other people’s opinions. 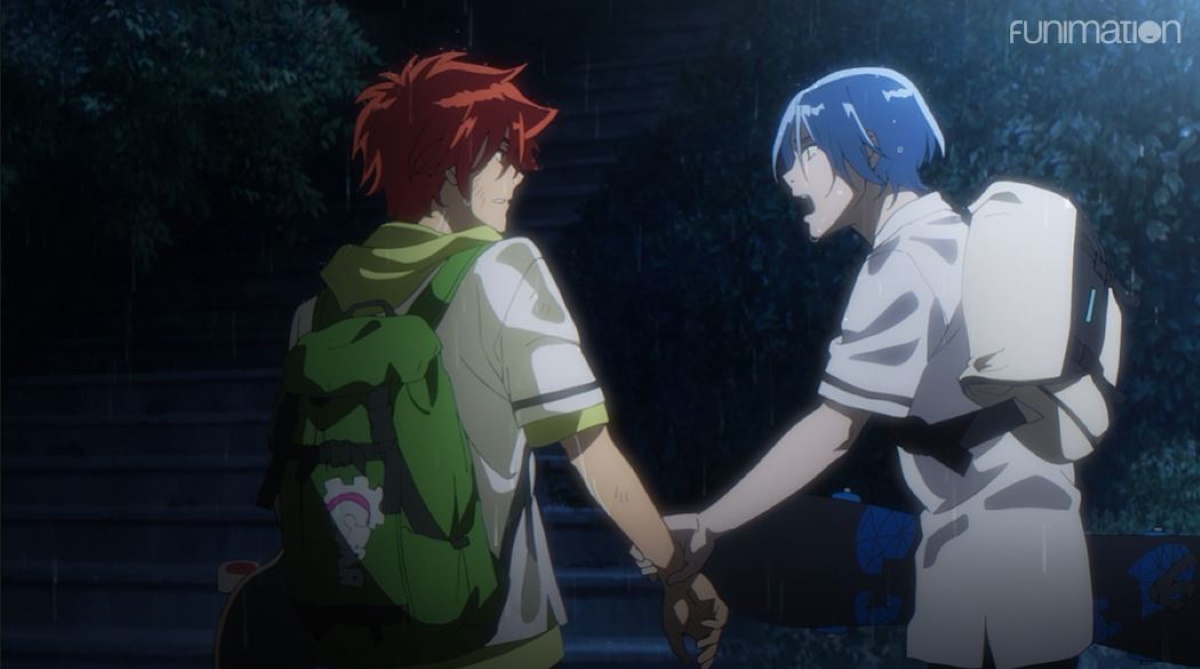 Even after his disastrous match against Adam, Reki’s only concern was Langa not going against him because he didn’t want him to get hurt. There was no “I’ll improve so I can beat him next time,” just a quiet, “Langa, please, don’t face him.” Reki’s own defeat didn’t matter nearly as much as Langa’s safety so the two of them could continue to enjoy skateboarding together. That’s it. Now Reki’s questioning everything about himself and skateboarding.

Meanwhile, Langa is CLEARLY lost without Reki. This isn’t uncommon in sports anime where two characters drift aimlessly until they find their way back to each other, but this? This is a lot. Langa has spent the past two episodes calling out to Reki, not enjoying skateboarding one bit EVEN IF he was looking forward to the tournament. He feels no rush for skateboarding UNTIL he hears Reki cheer for him, and when he wins his beef against Joe, the first thing he does is try and find Reki.

Langa… shouldn’t you be watching the next match and studying your potential opponent? Nope, none of that, he doesn’t even care he just wants to get to Reki again. It’s like he can’t function unless if Reki’s there, something that HIS OWN MOTHER picked up on and talked to him about.

I just … I need these two to make up. Please. 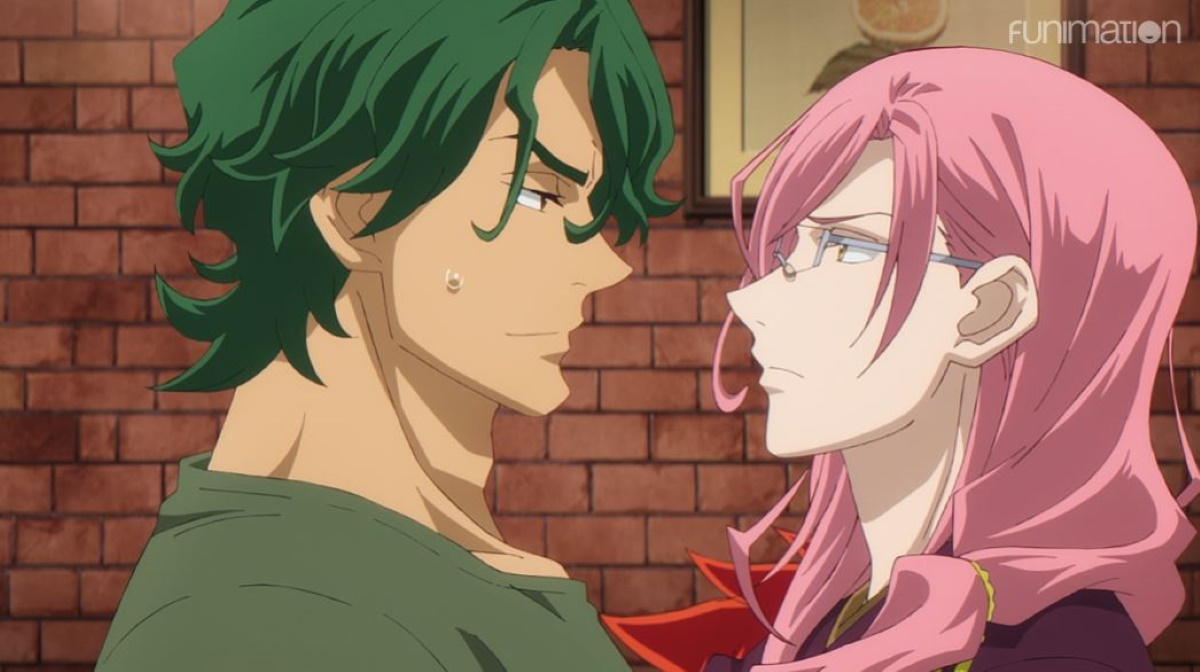 Much like Reki and Langa, I assumed that I had this ship figured out. Green-haired himbo and pink-haired beauty who constantly bicker, meaning that they are, most definitely, married. Joe is the disaster bi (or pan) who is out there flirting with women, but his heart belongs to Cherry, who he loving addresses by his real name when no one else is around.

As the series progressed, the hints kept coming in. These two have traveled together, on multiple occasions:

My biggest question after watching the latest episode of SK8:

Cherry and Joe have been to L.A. and Paris.

My question is, were these separate honeymoon and anniversary trips, or was it one gigantic honeymoon where they went to different cities across the world? pic.twitter.com/ypfJH7uJKS

And these two, when watching each other in the middle of intense beefs, quietly whisper each other’s real names, and even fall back into banter to calm the other down (that’s why Joe rushed back to Cherry before his match, I’m sure of it).

I thought these two would be the comedic duo who didn’t get as much development as the two leads, come to find out that they have history with the series antagonist in a “we used to be friends” kind of way, meaning that after the fallout with Adam, these two have stuck by each other. For years. It also means that as they watch Reki and Langa deal with Adam, they know the danger the boys are up against. This means there’s a deep desire to defeat Adam themselves, not just to get closure (more on that in the next entry) but to, probably, protect these kids.

Joe and Cherry have known each other since high school, at least, but we actually don’t know how these two met. Could it have been before high school? Who introduced who to skateboarding? Did they end up doing “S” together? All this combined with Joe’s clear affection for Cherry in episode 9, when Cherry is injured by Adam, really turned these two into more than “LOL bickering husbands just kiss already.” From the way Joe looks at Cherry’s sleeping face, for all we know, they already have kissed, and continue to do so. Before I start talking about the Matador of Love let me just say that I personally ship Adam with a jail cell. Even if we know that his destructive love mentality isn’t his fault, he still needs to be far, far away from people until he can truly get his shit together. I don’t want him to end up with anyone, hell, I don’t even want him to go up against Langa. Don’t give him the satisfaction of racing against his Eve again. Nope. None of that.

However, that doesn’t mean the potential wasn’t there, once upon a time. PAST Adam and Cherry were definitely a thing… complete with pining Joe. My headcanon says that Joe was this close to asking Cherry out, but Adam came along, so Joe silently watched as Adam got closer to Cherry, but hey, if that’s what Cherry wanted, it was fine. After all, the THREE of them were friends, and while part of me wants to scream OT3 it’s kinda clear that Cherry was the one completely enamored by Adam, and Cherry (today) was, like, BITTERLY determined to beat Adam in a beef.

Present-day Adam and Cherry is nonexistent … kinda. It’s more one-sided on Cherry’s part since he’s trying to get through to Adam and find the young man who wouldn’t get off on abusing his opponents. I absolutely believe that Joe wanted to be the one to go up against Adam so Cherry wouldn’t have to because Adam, as he is now, is entirely too painful to watch.

My guess is that the reason why Adam covered his face back then was so his family wouldn’t know what he was up to, after all, in a previous flashback, his skateboard is tossed in the trash and burned. Methinks this is a case of “family grooms kid to be what they want him to be, kid finds an escape, that escape is taken from him so now the kid is a messed up grown-up.” So Adam taking off his hood for Cherry and Joe back then was a big deal, he even admitted that they were special (which definitely made Cherry’s heart skip all the beats).

Going from that to a man who moans happily over sending a teenager to the hospital (Reki) is quite the shock, hence Cherry’s determination, even if he failed.

And it needs to stop there because there’s a perfectly good himbo chef with his own restaurant right there, ready to pour Cherry some wine and take care of him. This explains why Joe has been so adamant with Reki and Langa patching things up, going so far as to tell Langa to RUN after Reki. He doesn’t want these two to go through the same thing he (and Cherry) did with Adam.

Someone make the SK8 the Infinity AMV to Shawn Mendes’ “Treat You Better” right now please and thank you. 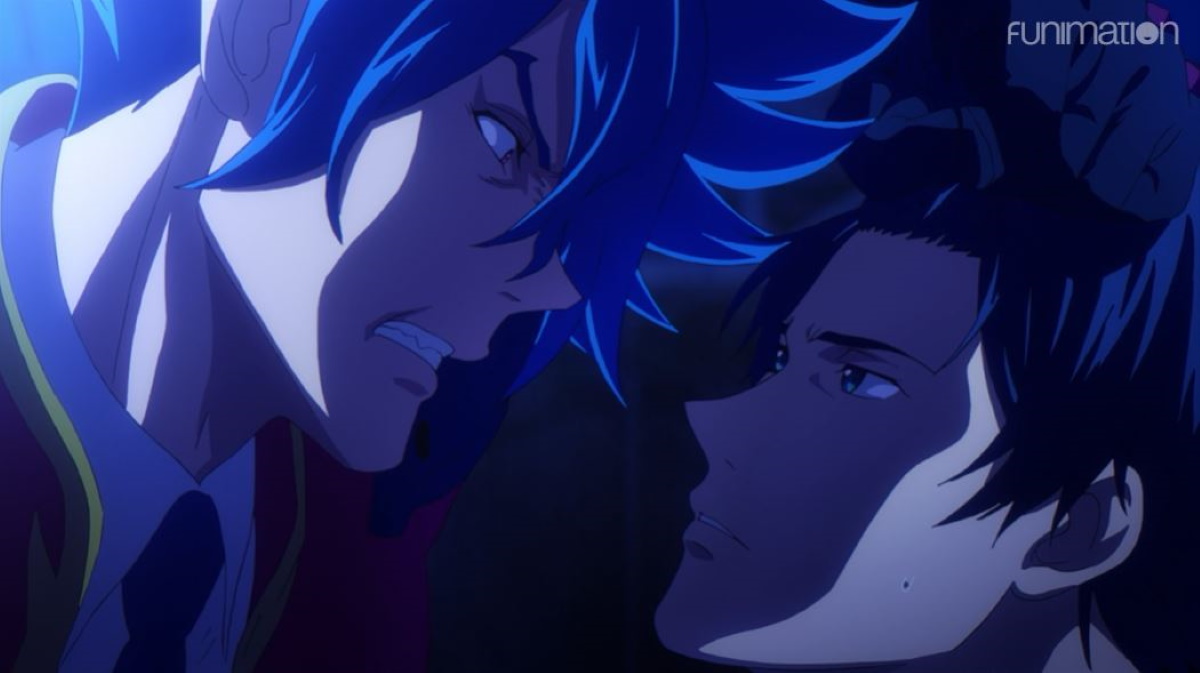 Who even IS Tadashi to Adam? Serving as the man’s secretary, for many episodes we watched Adam treat him like a dog (and even call him one) and Tadashi just took it… until episode 8. Tadashi enters Adam’s tournament and is determined to beat him so he can, well, get his shit together. We find out that Tadashi’s the one who introduced Adam to skateboarding in the first place, and there’s a definite childhood friend vibe that went on between them. Knowing Adam’s backstory with his family and how they abused him, it looks like Tadashi was the one who offered a genuine form of comfort, however, when Adam’s skateboard is burned by his father, Tadashi stands there and does nothing about it, saying he has no opinion.

Why is Tadashi such an empty shell when it comes to Adam’s family? He (at least since episode 8) isn’t one with Adam, actually standing up to him because Adam’s real life is crumbling, something Adam refuses to acknowledge as he puts his energy into his tournament.

It’s also wild to see Adam react SO aggressively. Most of his hostile actions are covered with the love angle, but when he’s around Tadashi they are openly malicious. Adam gets legitimately ANGRY around this man, and there’s definitely a story as to why.

Is Tadashi how Adam’s family found out he was going out and skateboarding with Joe and Cherry?

I’m sure we’ll find out.

Either way, much like Adam and Cherry, this is a past ship that has no future. At MOST, I want Adam to apologize as he’s being carted off to prison, but I don’t want anyone (Cherry or Tadashi) pining after him.

Those are all of my SK8 the Infinity ships! If you haven’t been watching it already, you can check out the series on Funimation.

What ships do you have for this series? And how do you think the rest of the show will play out?