Where's the Outrage Over These Clown-Only 'It' Screenings? | The Mary Sue

Those guys sure had a lot to say about Wonder Woman. 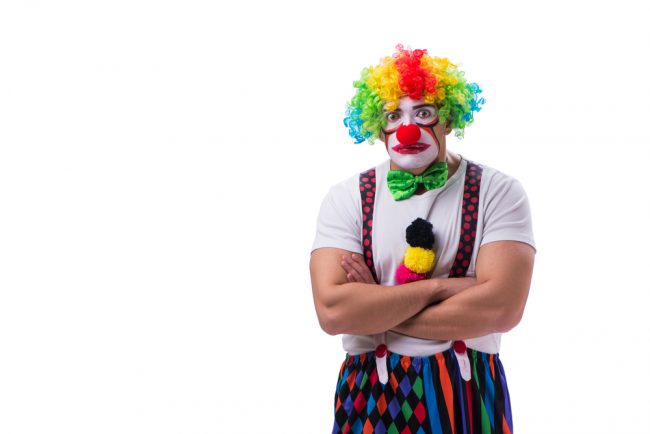 Back when the Alamo Drafthouse announced they were making one of their many Wonder Woman screenings open only to women, there were, of course, quite a few men outraged at the idea. Presumably, these were many of the same men balking at the mere existence of a Wonder Woman movie, who weren’t planning to see it in the first place and therefore weren’t upset at being turned away from the screening. Rather, they presented themselves of bastions of human equality, and they had countless analogies proving as much.

Beyond a fundamental misunderstanding of what it means to “identify” as a woman (no it is not just saying you feel like saying you’re a woman today to get something like a movie ticket or access to a bathroom, you transphobic creep monster), these men want to know if the Drafthouse will be planning other audience-specific screenings? Like an all-male showing of Thor: Ragnarok or an all-clown screening of IT. If the Drafthouse is going to discriminate against viewers, then they should at least discriminate equally, right?

As you may have heard, the Alamo Drafthouse is actually totally down with that idea.

Yes, last week, the theater announced they would be hosting a clown-only screening of IT. In fact, like the Wonder Woman screenings, this idea has proven so popular that they’ve added additional “Clown Party” screenings at theaters in other cities. Audiences are encouraged to dress in clown costumes and get their faces painted before watching the movie.

Now, I have as much interest in attending these terrifying-sounding screenings as those angry men did in seeing Wonder Woman (meaning exactly none). But those dudes took such a strong stand with their demand for equality and fairness, I’m sure they’ll be speaking out any minute in regard to this discrimination against non-clown persons, right?

I mean, fair is fair. Surely these are true men of principles and not mere attention-hungry, concern-trolling misogynists. I’m sure we’ll be hearing from them any minute now, with their angry tweets and their threats of boycotts, and their pointless retaliatory self-funded movie screenings. That would be the ethical move here.