Site Confirms You Knew Social Platforms Before They Were Cool 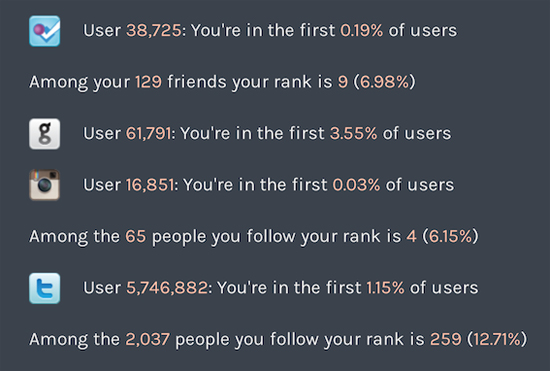 There’s a particular phenomenon popularized on the Internet wherein users who consider themselves early adopters look down on those who were late to the party. Now, thanks to idego.co, folks can figure out exactly how much cooler folks are than other folks. The site asks for authorization to Twitter, Instagram, Foursquare, and Github. After being authorized, it spits out where that account exists, in percentage points, when compared to all other accounts.

Given that this is basically what the Internet does on a regular basis, people are sure to flock to the site to garner a chance at gloating. Beyond fueling our innate desire to know things before other folks know things, idego.co serves as a useful benchmark for how quickly someone adopts new applications as they roll off the virtual assembly line. If you’re in an industry that heavily leans on social media or the technology behind it, and you’re in the bottom 5% of these measurements, then it might be time to change careers.

The one big flaw here is that all the numbers are crunched under the hood. Just because the site tells you that you’re within the first 3.68% of Twitter users doesn’t necessarily make it fact. It also requires authorization, which is always a bit scary when you’re deciding whether or not to use applications that solely exist for their novelty. Theoretically, all it needs to do is acquire an account’s unique identification to determine exactly where in the grand scheme of accounts it exists, but that doesn’t mean that’s all it will do. As with anything on the Internet, users must make a choice.

(idego.co via The Next Web)