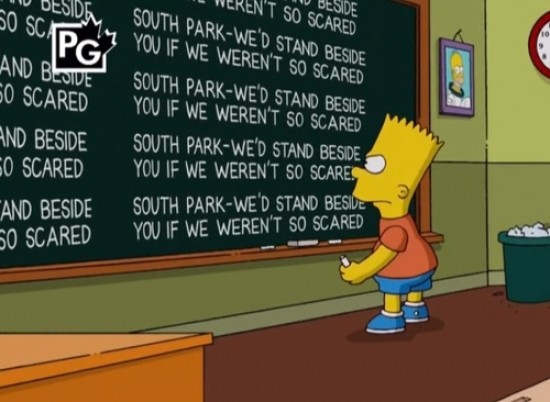 The Simpsons and South Park have made fun of each other in the past, but tonight’s Simpsons opened with a quick but touching show of inter-cartoon support, courtesy of Bart’s chalkboard.

In response to the controversy over the most recent South Park episode, #201 — in which Comedy Central heavily censored the content of the episode that screened on-air and refused to broadcast it online due to death threats South Park creators Trey Parker and Matt Stone received over their depiction of Muhammed in a bear suit — Bart’s chalkboard read “South Park – We’d Stand Beside You If We Weren’t So Scared.”

In related news, a Seattle cartoonist, Molly Norris, has declared May 20th “Everybody Draw Mohammed Day,” which is sure to invite the requisite firestorm of controversy as the date draws closer. (h/t Raw Story)

‘”I wanna water down the targets,” Norris said [on a Seattle radio show]. “I haven’t really organized it yet. I posted it on Facebook and I have gotten a couple drawings of Mohammed. I guess I gotta follow through and put them on a deck of cards or something.”‘

Update: Norris has backed out of the event. LAT: “Her stark website today reads: “”I am NOT involved in “Everybody Draw Mohammd [sic] Day!”

“I made a cartoon that went viral and I am not going with it. Many other folks have used my cartoon to start sites, etc. Please go to them as I am a private person who draws stuff,” she writes.”