Why Simone Is the Perfect Addition to The Good Place Gang 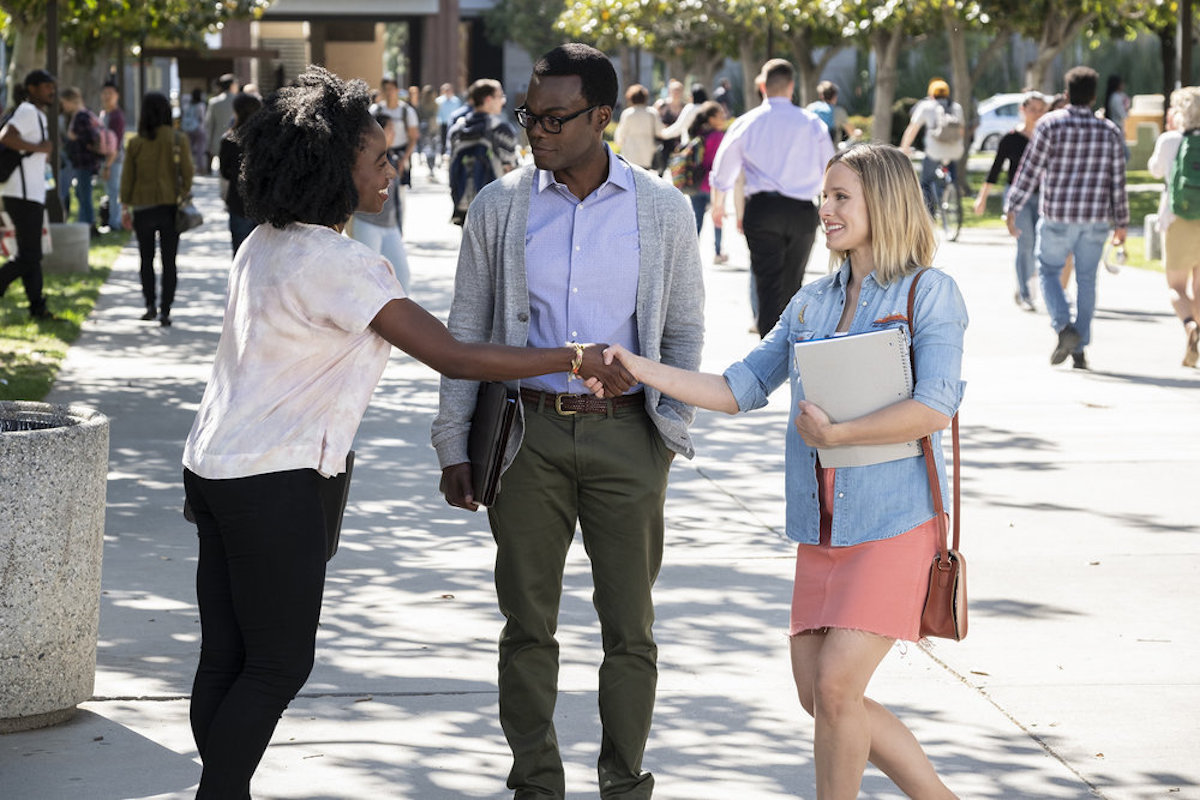 The Good Place returned last night and the new season has introduced us to a new character: Simone, Chidi’s neuroscientist colleague and romantic interest. Played by Kirby Howell Baptiste of Killing Eve, Love, and Barry, Simone is brilliant and hilarious and while I know there are some angry Chidi/Eleanor shippers out there, she’s the perfect addition to the show’s ensemble.

The show has had a number of guest stars, but all additions to the cast have been in the form of antagonists. Adam Scott’s Trevor, Mark Evan Jackson’s Shawn–at best, new characters are neutral, like with Maya Rudolph’s Judge or flashback friends like Chidi’s boot-loving pal, Henry. Now, with the gang back on Earth, they get to have an ally with no ties whatsoever–that we know of, and uh oh, now my brain is spiraling with terrible possibilities–to the afterlife. She’s a friend and a partner not just to Chidi, but also to Eleanor. And while Simone and Chidi clearly have chemistry, it is their partnership, more than the romance or sex, that the show focuses on.

Because ultimately, this is a show about friendship. So far, Cheleanor has had a variation of the will they/won’t they storyline, but it’s less about romantic love than it is about their deep bond. They’re clearly soul mates, but whether that’s romantic or not doesn’t even seem to be a question the show feels the need to answer. These are just two people who need to be in each other’s lives in order to be the best versions of themselves, and that’s beautiful.

With Chidi and Simone, we also see another opportunity for lazier writing that the writers happily pass over. In another show, jealousy would take over and the story would focus on a bitter love triangle. We saw this subversive writing when Jason married Janet, just when both Eleanor and Tahani were trying to come to terms with the idea that they might be fated to be Jason’s soul mate. Instead of pitting the women against each other, that wedding scene was one of the first times we really got to see Eleanor and Tahani bond.

Janet may constantly, sweetly obsess over Jason, but in general, when we’ve seen romantic jealousy on this show, it was the manufactured product of literal demons, like with the Bad Place’s “Real Eleanor” showing up, claiming to be Chidi’s soulmate, causing him to question his loyalty to actual-real Eleanor. The Bad Place tries to use romance to tear bonds apart. But Chidi and Eleanor’s friendship is so strong, Eleanor only wants the best for Chidi, and she’s generally excited to try to help him open up to Simone about his feelings.

That’s not to say these two can’t or won’t re-fall in love for the millionth time, but it’s sweet that the show doesn’t feel the need to rush that. What Eleanor needs more than a romantic soul mate is friends. (And what Chidi needs is Eleanor in his life.) By not focusing on romantic love, Eleanor gets to have not just one great friend in Chidi, but Simone as well.

Plus, if we really need some sexy shipping, even just in our mind canons, this leaves Eleanor open for her one true soul mate, Tahani.