That certainly is an achievement 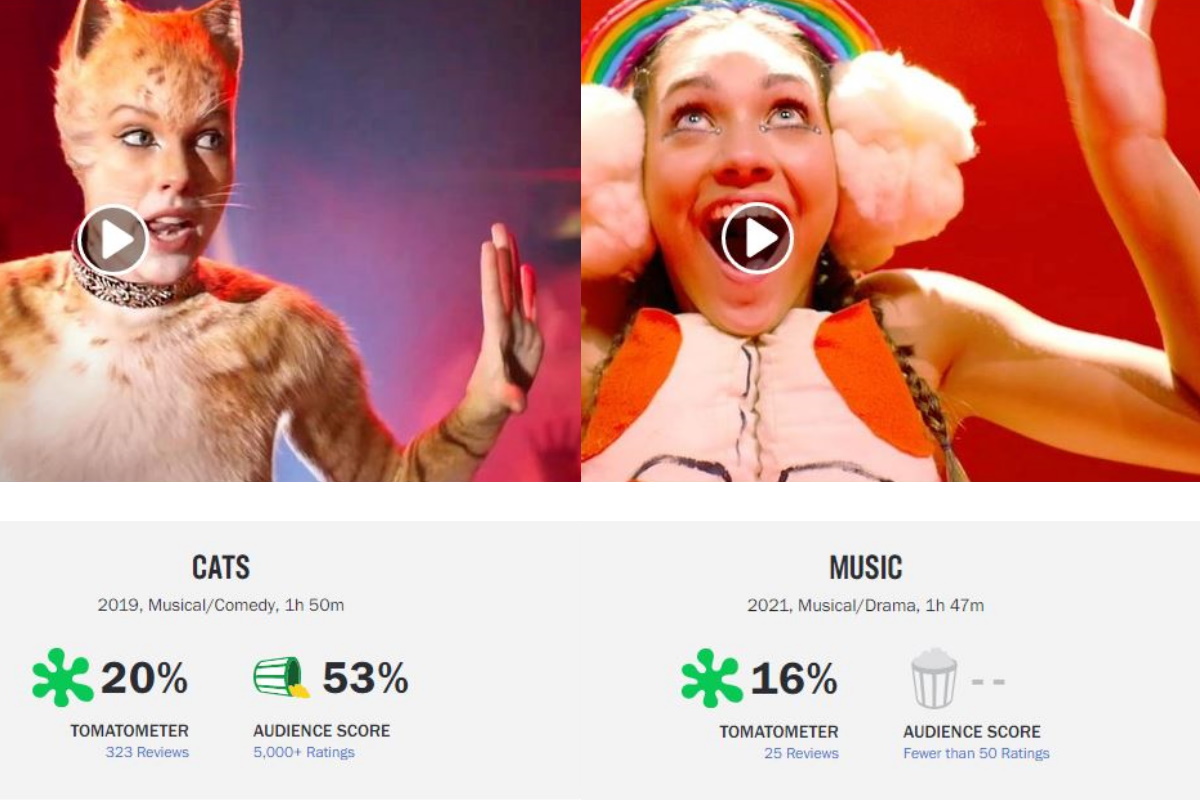 In one of Sia’s many bad takes in regards to her wildly problematic film Music, the director/singer told everyone to wait until the release to form a “proper” opinion as if the casting, the trailer, and her responses weren’t enough reason to toss this production in the trash.

And how she convinced the young actress Maddie Ziegler to do the part even if Maddie was uncomfortable doing it (Sia failed that girl so much).

And why you don’t have to see the movie to form a “proper” opinion if you’re already turned off by the trailer.

But for the sake of this article, let’s say that some people actually do want to see for themselves despite the red flags that surface anytime you mention this movie. Well, here’s what they’re in for, according to critics:

This film is so bad that it’s worse than Cats. Not the musical, no, the 2019 film. You know the one.

(And yes it has gone down a percentage in the last two days.)

I feel like I don’t have to explain the kind of achievement that’s been unlocked with that kind of distinction.

Has anyone checked in with the Golden Globes committee?

Are they doing okay after this news?

Here’s what the critic consensus of the movie is courtesy of Rotten Tomatoes:

Offensive in its depiction of autism – and painfully misguided in essentially every respect – Music is a vanity project that begs to be turned down.

And here’s an entire thread breaking down all the problems with the film from an autistic perspective (I should also note that some of the critic reviews from Rotten Tomatoes are also from autistic critics):

I’m watching Sia’s movie, in order to write a detailed & chronological review (so that nobody else watches it out of curiosity).

But for now, I just want the public to see a few things that speak for themselves, starting with this image: pic.twitter.com/jPqtd5tLOz

Listen. I would’ve much rather the movie didn’t exist at all, but since we can’t have nice things my next hope was that Sia would actually listen to feedback and make changes instead of … um … this:

An interviewer said nonverbal autistic people “might as well be inanimate objects, like a wig” and Sia agreed 😐 if you weren’t already convinced not to watch it you should be now pic.twitter.com/k0TBjUKlnF

So THEN I hoped, with that unwarranted Golden Globes “we clearly did zero point zero percent research on this movie because if we did we’d know this was a bad look” nomination, followed by apology number infinity, that Sia would AT LEAST make good on her promise to add warning labels for the restraint scenes before removing them entirely from future releases.

You already know where I’m going with this:

Two other things I want to touch on:

1. The strobing lights and colors in the dance scenes are extremely overstimulating, and could cause seizures in people with photosensitive epilepsy (common in autistic people)

2. The restraint scenes are still there, without a warning.

Now you might be wondering when did Sia ever say that she’d add a warning to the restraint scenes/remove them? Well, it turns out she tweeted about it … then deleted her Twitter. Don’t worry, I got you, the tweets are in this Variety piece.

So since nothing on my wishlist for this film happened I’m left with delighting in the movie being universally panned to the point that THIS is being seen as a better time:

That’s exactly what should happen to it because there’s absolutely no excuse for Music to be as insensitive as it is. Sia had every opportunity to do right by Music but chose to convince a child into a role that completely dismisses the community it’s based on. Now that the movie is out I’m content in watching critics hammer in the fact that this isn’t it, and was never it to begin with.

Normally I roll my eyes when a celebrity flubs up and runs away, but Sia was offering nothing of value with this. Every response was terrible and only served to hurt the autistic community, further driving home the fact that she really didn’t give a blip and just wanted to make a musical (which she could’ve done WITHOUT her depiction of autism). She’s given folks every reason to not support this movie, right down to the abysmal critic scores.

I hope everyone uses her as an example of what happens when you cover your ears with your hands to block out the honest feedback from the community you’re supposedly trying to represent.

Honestly? She can just stay off Twitter and never direct a movie again.