The Women Who Dress Like Men: Shoujo Staples of Anime and Manga — Part 3

The host with the most. 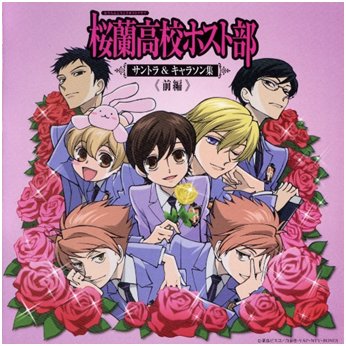 Welcome to a three-part series where Caitlin Donovan gives you an in-depth look at three of the biggest staples in this particular subsection of shoujo manga and anime: stories with female main characters who live their lives in male dress. You can read part one here and part two here. But whether a show or comic has a lot to say about gender or a little, there’s still a lot to explore, so let’s get going with part three!

Our final entry in the trilogy of shoujo manga and anime where girls cross dress, challenge gender roles, and encounter lots of roses is Ouran High School Host Club.

Ouran started as a manga written by Bisco Hatori from 2002 to 2010. It received an anime adaptation by Studio Bones in 2006 and even received a live action adaptation (both show and film) in 2011.

The basic premise of Ouran is that scholarship student Haruhi Fujioka is attending a school for the wealthy. She mistakenly stumbles into the high school’s “Host Club,” which is basically a club where attractive boys entertain the girls in the school with tea, costumes, and flirtations. She accidentally breaks their expensive vase, and the Host Club, under the impression she is a boy because of her appearance, forces her to join to pay back the debt. She’s perfectly fine with cross-dressing and entertaining the girls and ends up getting involved with the quirky boys who make up the club.

While Revolutionary Girl Utena is a deconstruction of shoujo, Ouran is very much an affectionate parody. There’s a lot of meta commentary about how the boys who populate the club fit certain archetypes and cater to certain straight girl fetishes (the cool glasses guy, etc.), and there’s a lot of poking fun at the romantic tropes that populate the genre. For instance, Tamaki Suoh, the head of the Host Club, fits the typical shoujo archetype of princely love interest, but he’s also portrayed as airheaded and kind of obnoxious, and Haruhi isn’t impressed by his antics.

The series actually reverses the usual tropes that follow shoujo romances (and a lot of romances in general)—rather than the emotional, sensitive girl desperately wanting her upperclassman to notice her as she tries to crack his cynical, unimpressed armor with her wide-eyed idealism, the opposite is true. The sensitive, emotional male upperclassman (Tamaki) desperately wants the cynical, unimpressed girl to be won over by his warmth and idealism.

The characters of Ouran are all very funny and play off each other really well, and the story’s humor is usually on point. All of the characters do have some backstory and conflict going for them, too. Haruhi is a good lead—she’s smart and hardworking, with the ambition to be a lawyer like her late mother. She’s very level-headed and provides a lot of deadpan humor. Though she doesn’t fight with a sword like Utena or Oscar, she is very brave when she needs to be and sticks up for her friends and what she believes in. She’s also jaded and has a hard time being taken outside her comfort zone, and the Host Club challenges that.

She’s pretty accepting and tolerant of people and makes it clear that she thinks people shouldn’t be judged by gender. This clashes quite a bit with the more traditionalist and machismo-filled views a lot of the boys in the Host Club have. While the conflict remains pretty low-key, it’s interesting that it’s bought up.

As with the other shows listed, there are also canonically queer characters—a character’s dad refers to himself as bisexual and works with drag queen friends. The child is perfectly accepting of it. Class differences and classism are also bought up. Though it’s mostly explored through humor, there is a theme of the rich boys learning more about the world outside their privileged bubble through Haruhi.

However, while Ouran is the most modern entry here, it’s also arguably the least progressive for its time and riddled with uncomfortable things. This includes the issue of sexual assault being treated rather problematically. There is an episode where a character is accused of fault for trying to prevent a sexual assault and essentially intimidated into “being more careful and knowing her place as a girl” by her male friend. There are a lot of victim blaming and paternalistic undertones there.

Another huge problem is how the only lesbians in the manga are portrayed as rabid man-haters. They are intended as a (probably) affectionate parody of Takarazuka culture and characters like Oscar from The Rose of Versailles, as well as being a counterpart to the equally ridiculous machismo of the Host Club. However, there is an icky scene that paints them as literal “feminazis.”  The anime plays a scene where the girls try to commit sexual assault for laughs. This doesn’t really play out that way in the manga, where the girls are portrayed more favorably.

Finally, to add to the pile, you may have guessed that queerness is often used as a joke or a punchline in this series. There are characters who pretend to be incestuous. There’s also a running joke about girls having fetishes for child-like boys, though the guy in the Host Club just looks like a little kid. The dub and official subs use what many trans people consider a slur to refer to the drag queen characters.

All in all, Ouran is a fun series, but unlike The Rose of Versailles or Revolutionary Girl Utena, it isn’t particularly innovative or groundbreaking. There aren’t even very many well-characterized girls besides Haruhi (though there is one other reoccurring female, and Haruhi gets a female friend later in the manga). However, it is extremely pretty, especially the anime, and it is also very well-made and just a good pleasure-watch if you’re okay with some uncomfortable scenes.

The Ouran High School Host Club anime is licensed by Funimation, and all the episodes are available on their YouTube as well as on Hulu. The manga, licensed by Viz Media, is available for purchase on Amazon.

So, as you can see, shoujo shouldn’t be underestimated or dismissed. There are very complex stories in there, and it can be a really interesting avenue though which artists explore gender and sexuality and challenge an audience of young girls to do the same. That is extremely valuable. Not to mention, there is a very nice collection of heroic female characters who fight for what they believe in, challenge gender roles, and question society. The importance of this trend and these stories is something that should be talked about. If any of these stories sound good to you, I encourage you to check them out.

Caitlin Donovan is a longtime comic geek and internet blogger who is  currently working on her MFA and her first novel. She formerly wrote for Big Shiny Robot and for a time helped run the blog “When Fangirls Attack”. These days, she mostly can be found blogging on her Tumblr, Lady Love and Justice.