The Women Who Dress Like Men: Shoujo Staples of Anime and Manga — Part 2 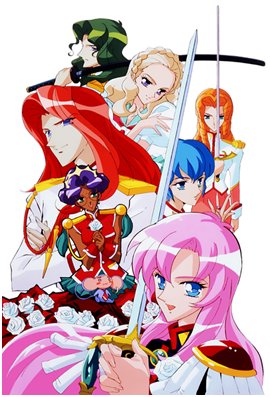 Welcome to a three part series where Caitlin Donovan gives you an in-depth look at three of the biggest staples in this particular subsection of shoujo manga and anime: stories with female main characters who live their lives in male dress. You can read part one here, but whether a show or comic has a lot to say about gender or a little, there’s still a lot to explore, so lets get going with part two!

Revolutionary Girl Utena was developed simultaneously as an anime and manga by the group Be-Papas. The manga began in 1996 and the anime was first broadcast in 1997. After the anime ended a movie called The Adolescence of Utena was created and hit theatres in 1999.

The anime and movie were directed by Kunihiko Ikuhara, a man who was fresh off directing three seasons of Sailor Moon. Ikuhara was the one who first conceived of such a project and got the group together to do it.

What is the Revolutionary Utena series? The basic premise is that Utena Tenjou was given a ring by a mysterious prince after she lost her parents. She was impressed by the prince and decided she would become a prince herself, even dressing in a boy’s school uniform (one that looks nothing like the other boys uniforms, mind you). She followed her princely fantasies to a strange academy. However, this causes her to unwittingly be entangled in a dangerous game that the student council  is playing behind the scenes, where they duel to possess a girl named Anthy Himemiya, as it is said that to “possess” her is to hold the power to revolutionize the world.

In a broader sense? It would be easiest to say that RGU is a highly surrealist and allegorical story that deconstructs gender roles, oppressive systems (particularly the patriarchy), fairy tale archetypes and even the shoujo genre itself.

The creators of RGU have admitted that they took inspiration from The Rose of Versailles in aesthetic (and expect to be smothered with roses in every frame watching this series) but strove to be different in the content — and you’ll see RGU utterly ripping apart some of the tropes that dominate The Rose of Versailles and fiction aimed toward women in general. Trust no smooth-talking playboy on this show. Sexually dominant men are shown to be twisted and dangerous. Sexual assault and abuse is not romanticized but examined from every unsettling and terrifying angle. Chivalry is completely taken to task and ripped apart. The archetypes of prince and princess are turned inside out. The show questions whether it’s even really a good idea for a woman to look up to a male ideal and explores the dangers of going along with the rules of a man’s world.

RGU as a series is highly symbolic and surreal, so if you enjoy analyzing things and trying to figure things out, a lot is open to interpretation. The series is not afraid to have fun with itself and completely revel in its utter bizarreness. You’ll  have to learn to go along with the fun and accept it.

RGU has moments of real beauty in its animation, not to mention a fantastic and elaborate soundtrack. However, it is a low budget anime made in the 90s and as such often relies of stock footage. But the creators actually make the stock footage work for them by having it play into the main themes of the show, which are that people are trapped in constantly repeating cycles. I would say one of the core things RGU examines is how one can be trapped in a cycle of abuse, both on a larger level (abuse by an oppressive system) or a smaller level (abuse by your partner).  Learned helplessness, victim blaming, and white knight complexes are all concepts that are thoroughly examined in this show.

Utena and Anthy’s relationship is undeniably the core of the series and it is a complicated and evolving one. While the friendship and love between the two characters grows, both characters are also sometimes have a hard time understanding each other due to their limitations.

Utena is compassionate and brave, but she clings to fantasies and is limited by her own willful ignorance. Anthy is a complex character that challenges the “damsel in distress” archetype and how female survivors of abuse are often portrayed in fiction. Every character Anthy interacts with tends to shove her into a simple role for their own comfort and agenda — trophy, helpless damsel, evil horror — but Anthy herself cannot be simply categorized. The show ever so slowly strips back her layers and all her contradictions, destroying all preconceptions. The end message is clear — women should not be assigned to one role or categorized as one thing. It should also be noted that she is a rare example of a darker-skinned character in anime and it’s interesting to take that into account.

There are several other characters in RGU as well, all of whom are deeply flawed and twisted in their own ways and most of whom have interesting arcs. RGU deals with the tangled mess of human relationships and how self-destructive people can be. Pretty much every single character in RGU is heaping with queer subtext or text (it’s hard to call it “subtext” when two dudes are literally rolling around in bed together with their shirts open), but one character’s arc is basically almost entirely about their sexuality and having a crush on a member of the same gender. Overall, the character and relationship are presented as being a mess of flaws and complexity like the rest of the show

I can’t finish my discussion of the series without talking about the different iterations of RGU. There is a manga written by Chiho Saito, but to be honest, I am not a fan. The manga,to me, plays a lot of clichés and harmful tropes straight where the anime deconstructed them. You can decide for yourself. But the hugest sticking point for me is Saito is openly homophobic. The main characters, Anthy and Utena, were intended by director Ikuhara from the beginning to be romantically attracted to each other, but when Saito realized this was his intention, she threatened to quit, which would have meant the whole project falling apart. As a result, while it’s still fairly obvious in the show, Ikuhara was far less explicit about Anthy and Utena than he should have been able to be. However, it is confirmed that these characters are queer by him, so that’s really another reason to be interested in RGU — it’s one of the rare series with queer main characters. 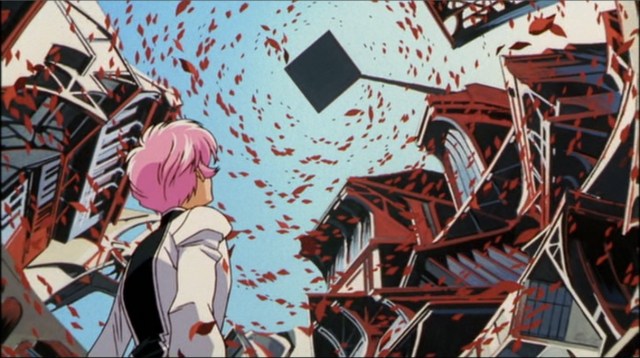 There is also the movie, The Adolescence of Utena, released in 1999. The movie is sort of all the surreal aspects of the series packed into a small time slot, so it can be offputting. However, I do think it’s extremely valuable because it contains things that the creators weren’t able to fit in the first anime. This includes backstory for some characters and, most importantly, Anthy and Utena are finally allowed to be romantic together in a very explicit way. The movie contains the broad strokes of the series’ messages and essentially stars two girls in a romantic relationship fighting to revolutionize the world, which is a rare treat. In addition, the animation is absolutely breathtaking and there are some famously mindbending sequences that have to be seen to be believed.

That said, this show (and its film adaptation) examines and depicts a ton of uncomfortable things that may trigger people. RGU is generally tasteful in its imagery and never graphic, but you will see domestic abuse, body horror, heavily implied rape — even of children — and sexual assault. Incest (primarily between brothers and sisters) is a huge theme in RGU and though it is never depicted as healthy, it is explored deeply.  Attempted suicide is shown, as is mob violence and murder. There are many cases of adults seducing, manipulating and having sexual relations with minors. Anthy’s abuse at thehands of other characters, especially in the beginning, can be incredibly hard to watch.

While Revolutionary Girl Utena can be compared to many things, there is nothing quite like it and probably never will be. To simply say it has incredible and complicated female characters and queer characters would be selling it short. It’s an EPIC about female coming of age and the incredible bonds between women, complete with sword fights, labyrinths, and heroics. It’s a story about gender, it’s a story about sexuality… but most of all, it’s a powerful story about having to grow up in a world where adulthood means corruption and where everyone seeks to confine you — ultimately having to choose between clinging to your past and hiding away from that oppressive world or… revolutionizing it.

Revolutionary Girl Utena (both show and film) are available on Hulu — though I have to warn that it’s only the dub, which isn’t good. There is bad acting and bad understanding of the material. The dub directors did not even realize a certain character was (very obviously) gay until one of their voice actors explained it.

If you want the subtitled version, your only option is really to buy the DVDs from Rightstuf. These are super high quality remastered DVDs packed with extras and commentary, including an art and interview book. It may cost money, but it’s worth the investment.

Caitlin Donovan is a longtime comic geek and internet blogger who is  currently working on her MFA and her first novel. She formerly wrote for Big Shiny Robot and for a time helped run the blog “When Fangirls Attack”. These days, she mostly can be found blogging on her tumblr, Lady Love and Justice.