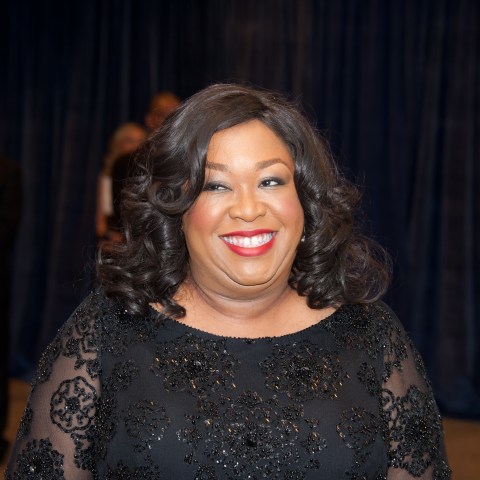 If there is any reigning monarch of network television right now it is surely Shonda Rhimes. Between Scandal, Grey’s Anatomy, and How to Get Away With Murder taking over Thursday night television, she’s doing pretty OK. She’s a groundbreaker in genre conventions, character writing, and representation. She’s also a woman and a person of color, so you better believe when she applies those writing skills to a speech about the glass ceiling it’s a thing worth paying attention to. Rhimes recently accepted the Sherry Lansing Leadership Award at The Hollywood Reporter‘s Women In Entertainment Breakfast. In her speech, titled “On Ceilings Made Of Glass,” she gave thanks to the many women who came before and broke the ground — and the glass — that she’s forging through right now. You can read the speech in full over at Buzzfeed, but here are some highlights. It’s a lot of the speech, to be honest. On her concerns after she learned she was getting the award “in recognition of [her] breaking through the industry’s glass ceiling as a woman and an African-American:”

I come from a very large, very competitive family. Extremely competitive. And by competitive, I mean, my mother says we’re not allowed to play Scrabble anymore when we get together because of the injuries and the tears. One of the rules in my family is you don’t ever get a trophy for participation, you don’t get a trophy for just being you. So getting an award today BECAUSE I’m a woman and an African-American feels… I was born with an awesome vagina and really gorgeous brown skin. I didn’t do anything to make either of those things happen. To get all Beyoncé about it, people: ‘I woke up like this.’

On how she hasn’t broken through any glass ceilings (emphasis mine):

On who did break that ceiling:

All the women, white, black, or brown who woke up like this, who came before me in this town. Think of them. Heads up, eyes on the target. Running. Full speed. Gravity be damned. Towards that thick layer of glass that is the ceiling. Running, full speed and crashing. Crashing into that ceiling and falling back. Crashing into it and falling back. Into it and falling back. Woman after woman. Each one running and each one crashing. And everyone falling. How many women had to hit that glass before the first crack appeared? How many cuts did they get, how many bruises? How hard did they have to hit the ceiling? How many women had to hit that glass to ripple it, to send out a thousand hairline fractures? How many women had to hit that glass before the pressure of their effort caused it to evolve from a thick pane of glass into just a thin sheet of splintered ice? So that when it was my turn to run, it didn’t even look like a ceiling anymore. I mean, the wind was already whistling through — I could always feel it on my face. And there were all these holes giving me a perfect view to other side. I didn’t even notice the gravity, I think it had worn itself away. So I didn’t have to fight as hard, I had time to study the cracks. I had time to decide where the air felt the rarest, where the wind was the coolest, where the view was the most soaring. I picked my spot in the glass and called it my target. And I ran. And when I hit finally that ceiling, it just exploded into dust. Like that. My sisters who went before me had already handled it. No cuts. No bruises. No bleeding. Making it through the glass ceiling to the other side was simply a matter of running on a path created by every other woman’s footprints. I just hit at exactly the right time in exactly the right spot.

Is anyone else “YASS”ing and getting teary at the same time? Just me?

Update: You can watch the speech for yourself here: