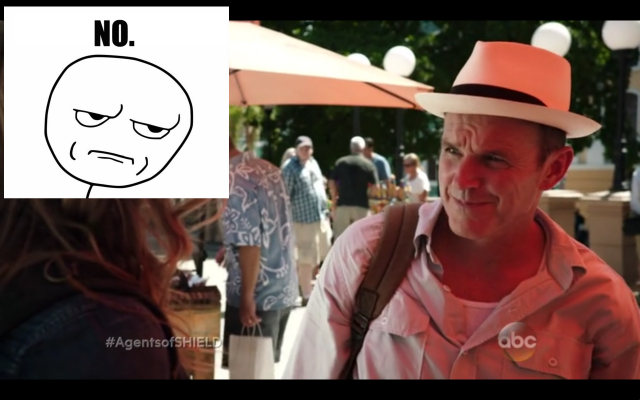 As we ramp up to next week’s mid-season finale, SHIELD is hitting the gas hard on the storyline and the character development and where was all this last season, SHIELD?!

As with all our recaps, the following contains spoilers.

SHIELD and Hydra are racing each other to Attilan, the Inhuman city which I guess is in Puerto Rico now (and not Atlantis, as they specifically mention in the episode), but the two sides can’t stay so separate forever. “…Ye Who Enter Here” finally gives us some quality time between weird pseudo-sisters Skye and Raina; while Skye is mostly just confused, Raina obviously has a lot of deep-seated Skye-related issues. I guess being the adopted child who was never good enough for crazily-abusive SpyDaddy will do that to you. 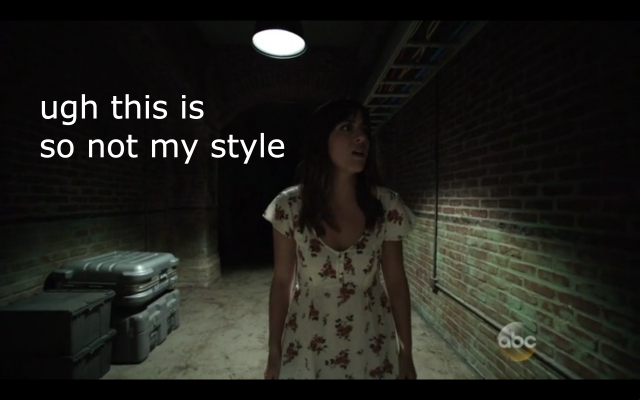 The opening scene of this week’s episode also gave us a little Skye/Raina metaphor, putting Skye into a flower dress while she ran around in dream-land. Seeing Coulson and May with Skye as a baby reminded me of my initial theory way back in season one – that they were actually her parents (it could totally have worked, but age and ethnicity-wise!) But I am so hella glad the writers went another route. 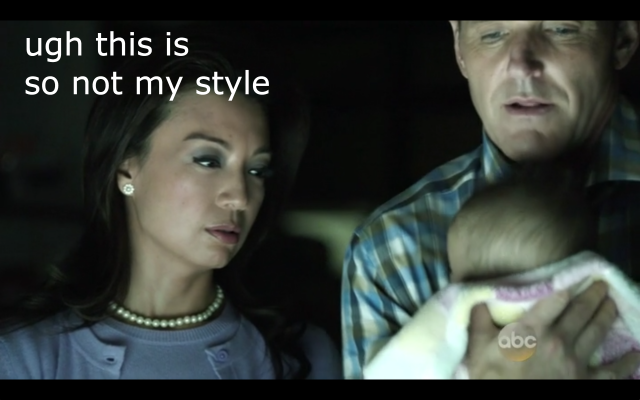 Despite my perennial dislike for her character, I was actually pretty okay with this Skye-heavy episode – especially since she got a big girl-fight scene with Agent 33. Though director Billy Gierhart is no Kevin Tancharoen, I enjoyed the slow-mo call-back to his KTanch’s episode – but I must admit I had a problem with Hunter coming in and ending the girl-fight with one speedy punch of his man-hands. C’mon. 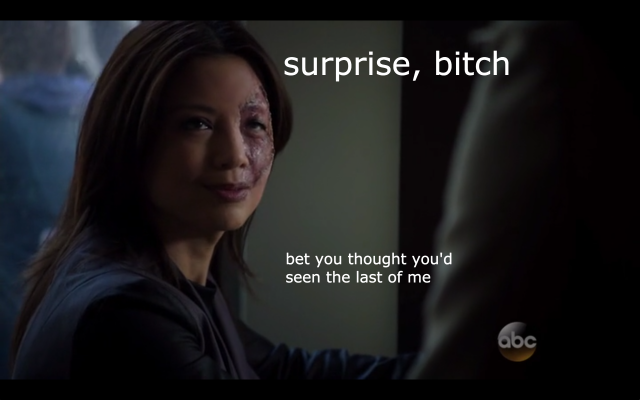 Part of what made the episode bearable was that the humorous and emotional moments were handed off to the supporting cast. Patton Oswalt’s army of brothers is an amazing addition – and are we all assuming they’re Life Model Decoys? Yes? We also have some great character moments from Bobbi, who gets to bond a little with the love of her life (Simmons), who admits that she Just Wasn’t That Into Fitz anyways. 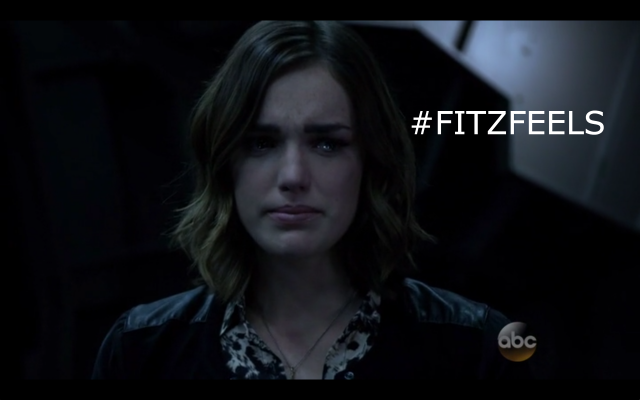 Bobbi also has a strong (and mysterious?!) connection with Mac 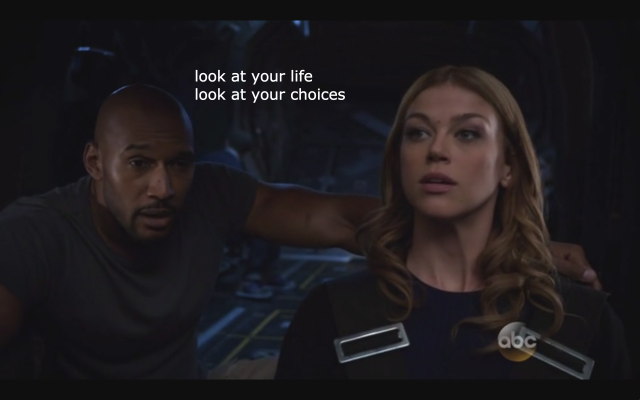 Sorry I just. I have to get myself together.

Why did it have to be Mac, SHIELD? Why couldn’t it have been Tripp? No one likes Tripp that much anyways! Or even Hunter! He had sex with Bobbi. He was basically asking to get Black Widow’d! What will Fitz do without his Best Bro?!

I’m assuming Mac survived the fall, since he’s a rage monster and they tend to survive stuff like that, but they’ve just got to be able to bring him back to normal again. Maybe when the Terrigen bomb goes off? I’m sorry, it’s just Mac was easily my favorite addition to this season of the show, and he was such a good foil for Fitz, and brought real humanity and dimension to a character that so easily could have become Just The Mechanic. I’m pretty sad.

Here, maybe this photo of my hopefully future Christmas present will cheer us all up: 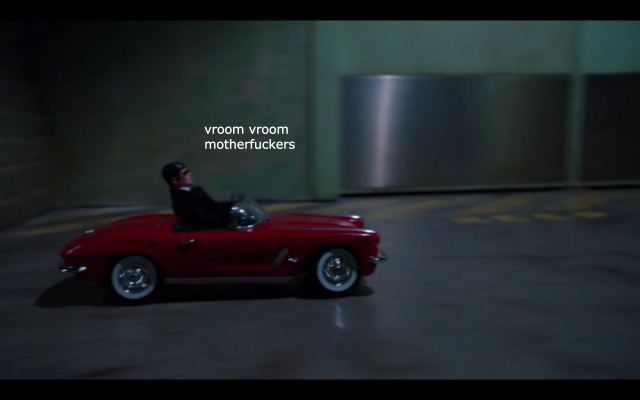 Anyways, at this point – what with Raina giving Kree confirmation – I think there can be pretty much no argument that the Diviner is the Terrigen Bomb, and that Raina and Skye are both Inhumans. In case you weren’t entirely convinced, ComicBook.com points out that  a variant cover for the 50th anniversary issue of Inhumans… 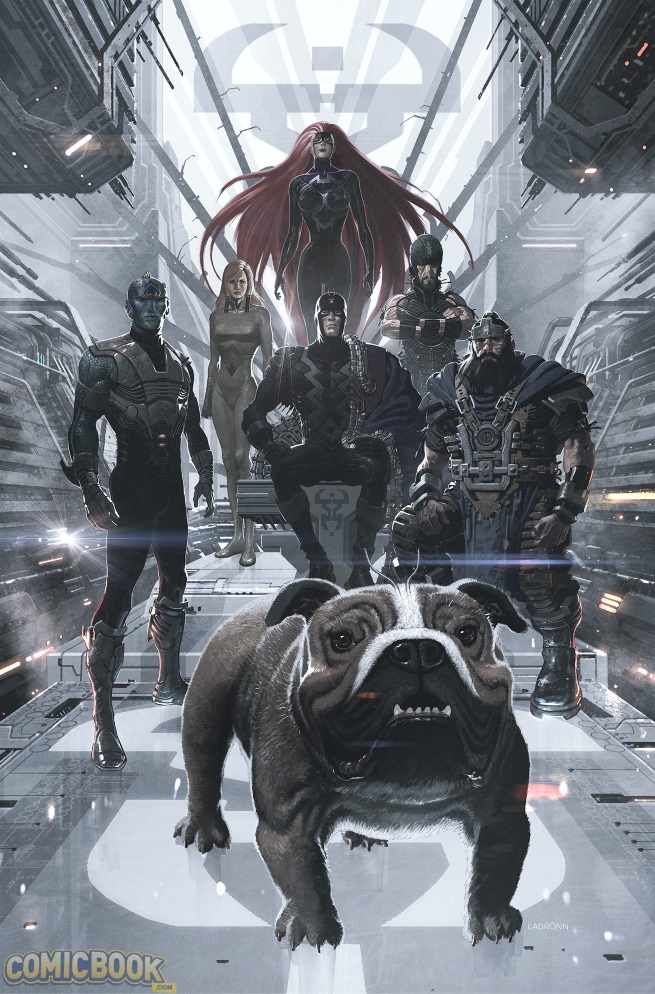 gets a little Coulson-y in the details: 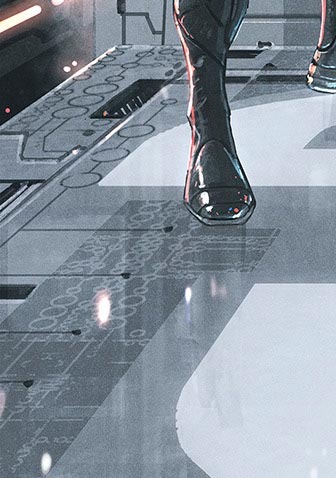 So what do you think Raina and Skye’s powers will be? Do you think they’ll be pre-existing characters from the Inhumans universe? I mean, they have been giving Skye some wavy hair this season, but that doesn’t necessarily make her Medusa. Probably.

[UPDATE: We have the best readers.

@SamMaggs Skye is Daisy Johnson, aka "Quake". They were playing "Daisy, Daisy" during her dream sequence.

Which also makes a ton of sense if her father, “The Doctor” (though I prefer SpyDaddy) really is Hyde. How did I totally miss this theory until this exact moment because my mind is blown.]