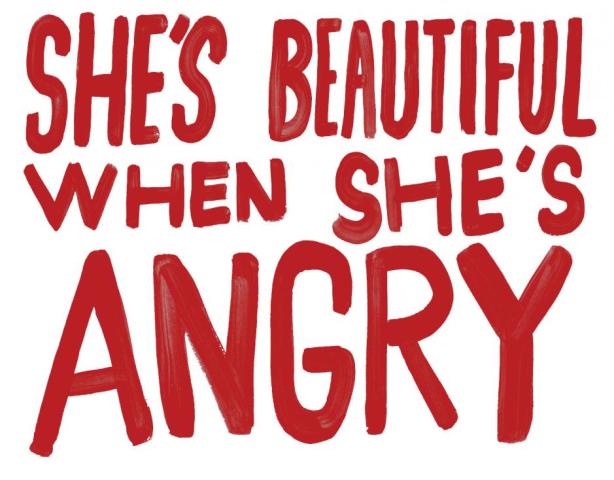 It’s difficult to separate She’s Beautiful When She’s Angry from the context of recent events or the actual experience I had of watching it in a theater, but considering the movie’s subject matter, that’s probably as it should be.

Directed, produced, and shot exclusively by women, She’s Beautiful When She’s Angry tells the story of the American feminist movement from 1966 to 1971 by juxtaposing fascinating archival footage with recently-filmed interviews of surviving activists from the era. It’s a reminder of both the debt we owe our predecessors and that the struggle for equality is never over, but it’s also occasionally hilarious and constantly engrossing.

I was fortunate to see the film screen as part of a possibly very limited run (the movie’s creators won’t find out until today if their opening weekend numbers will allow the movie to run for another week, so cross your fingers!), in a surprisingly all-ages audience. When a clip aired of a self-professed “chauvinist” news reporter reprimanding men for “giving” women the right to vote, a teenager shouted “are you kidding?” During a Question and Answer period with the production team, an older woman walked up and down the aisle, handing out actual, tangible information on her feminist group. Several times throughout the film, a silhouette of a hand could be seen against the images moving on the screen: an audience member throwing up a salute.

So many of the women in attendance clearly became organizers before the Internet, and are part of the dying breed of activists that She’s Beautiful When She’s Angry has preserved forever on film. Although the movie likely wouldn’t exist without the Internet (it was crowdfunded on Kickstarter), it’s still a reminder of how analog activism operates.

She’s Beautiful When She’s Angry also warns audiences that the struggle to become socially aware is an evolving one. The movie isn’t afraid to show feminism’s missteps as a movement, particularly in its treatment of gay activists. Those evolving politics were also addressed immediately after the film in a Q and A, where an audience member questioned the film’s omission of trans women. Although the movie’s focus only spans up to 1971, most of the interviews were filmed recently; considering the overall ingenuity of She’s Beautiful and the necessity of its message, it seems like greater inclusivity would have been easy. When questioned, director Mary Dore explained:

That’s a very valid question. I have to say, that because the film encompasses so much, we stopped in 1971. Those were not issues on any–you know, the gay issue was still breaking out at that point, that was breaking news. But I totally understand that it’s an incredibly important issue, and truthfully I wish there was some way I could have fit it in at the end, but I just couldn’t figure out how to.

At this point, we wanted to bring in everything. The issues of low wages for women today, and how bad that is. And the issues of immigrant women, who are doing all that protesting. There are so many current issues that we did tie in. So it’s a really important one, and I grant you that, but it wasn’t part of, there’s no time, really for us, in terms of what they were doing. I think there’s a lot of other good films on the subject and I wish I could include everything and, you know, what can I say. That’s the answer. We stopped in ’71, and we did the most brief catch-up that you’ve ever done in the history of movies at the end of the film. Needless to say, I don’t mean to be insulting young feminists today or young trans people who did all this organizing.

Regardless of that significant shortcoming, She’s Beautiful When She’s Angry is still an important reminder (because the world always appears to need it), that feminism is more than just a buzzword. Here’s hoping for a more inclusive sequel–but for that to happen, they’ll need heck of a lot of support.