Shelly Bond Will Run Her Own Imprint At IDW

DC's loss is the industry's gain 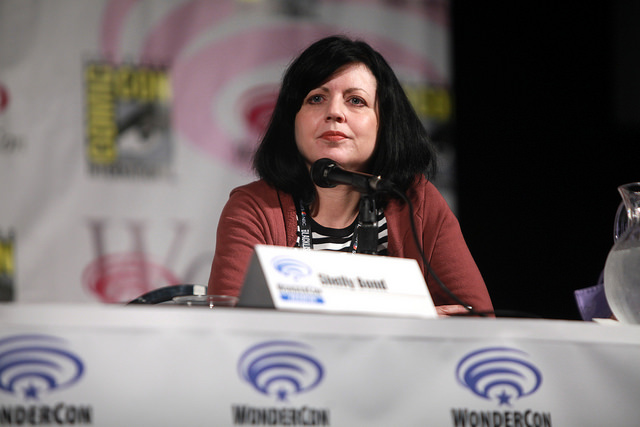 Another day, another comics company capitalizing on DC’s restructuring of Vertigo. Just a few weeks after Dark Horse announced Karen Berger’s Berger Books imprint, IDW announced an imprint from Shelly Bond at Emerald City Comicon (ECCC). Bond, who was let go from DC as part of the Vertigo restructuring in 2016, will now run her own creator-owned imprint at IDW called Black Crown. Based on early interviews, she’s ready to draw on her decades of experience to attract some big-name creators.

“I can’t drop names,” she said, in an interview with The Beat, “but you can think about the career that I’ve had, and the people I’ve worked with, and the books that stand out, and you’ll see a lot of names come back with interesting collaborators.”

Some of those “interesting collaborators” will be new artists and writers who Bond discovered in her time off. “I’ve been scouting talent,” she said. “I’ve been going to shows because I love comics and I love conventions. What you’re going to see with Black Crown is a lot of familiar faces, the people I’ve loved working with in the past. But also new blood. There’s a tremendous amount of young talent out there and it’s exciting to bring them in and help them hone their skills.”

Bond’s departure from DC followed soon after long-time Vertigo executive editor Karen Berger’s, leaving DC without two of its most powerful female editors. However, Bond’s dismissal was far more contentious than Berger’s voluntary departure, and so her imprint takes on more symbolic meaning. While Berger chose to leave after a quarter-century career, Bond was laid off after only three years as executive editor, after decades working with Vertigo and DC. Her dismissal came as a huge surprise in the industry.

It also sparked a comics conversation, driven by journalists like Janelle Asselin, about harassment and the treatment of women in the industry. “It’s late and I’m out of fucks,” tweeted Asselin, “so yes, the fact that DC can find reason to fire Shelly Bond and reason to keep [Eddie] Berganza employed is trash…I have friends with PTSD from Berganza and people like him. But yes, let’s fire the Shellys of the world.” Nick Hanover also tweeted the below:

I see a lot of people talking about DC’s resident serial harasser and I think collectively we just need to be saying Eddie Berganza.

In company terms, Bond’s and Berganza’s positions were entirely unrelated. Berganza works in the Superman office–where he reportedly cannot be trusted to have any women work with him–while Bond was the executive editor of Vertigo. However, the optics were undeniable. DC would bend over backwards to maintain a relationship with someone who is reportedly so dangerous that he affects their hiring practices, but Bond could be let go. As Paste succinctly put it, “Shelly Bond wasn’t fired so that Eddie Berganza could keep his job; Shelly Bond was fired even though Eddie Berganza gets to keep his job.”

The creation of Black Crown and Berger Books provides some small silver lining to the industry’s ever-hanging cloud of harassment. Today, we have two more creator-owned imprints from female editors than we used to. The future of those imprints looks very, very bright. But how many women with creative visions just as strong as Bond’s and Berger’s were forced out of the industry by DC’s enabling of sexual harassment? And how will Dark Horse, with its own murky history with harassment, treat Berger and anyone she manages? I’m genuinely happy to see women who’ve busted their humps for comics get their due–and get more control over whose voices and stories are published. But the more pressing question is how we ensure that the next generation of women won’t have to deal with the same silencing, harasser-enabling, and sexism as they enter the industry.

(Via Comics Alliance and The Beat; image via Gage Skidmore/Flickr)