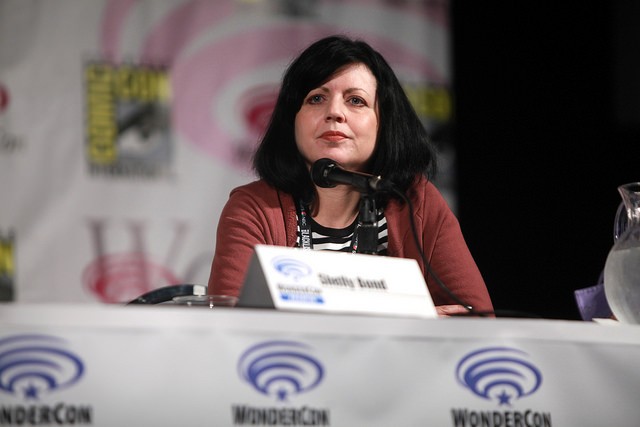 It’s the end of an era at DC Comics. The company has decided to “restructure” their Vertigo imprint, and in doing so have let go one of their most valuable assets, Vertigo’s Executive Editor, Shelly Bond.

According to The Hollywood Reporter, Bond’s position of VP and Executive Editor has been eliminated all together, because DC decided it was a good idea to have the imprint fall under the purview of DC co-publishers Dan Didio and Jim Lee, with Vertigo’s remaining editorial staff answering directly to them. I suppose they got tired of Vertigo consistently outclassing them, so they wanted to lump it in with everything else?

We reached out to DC Comics for a statement*, and received the following from DC’s SVP of Publicity, Courtney Simmons:

DC Entertainment is reexamining the direction and focus of the Vertigo imprint of comic books and graphic novels. The goal is to keep competitive and stay relevant in the changing marketplace, and to set the business up for future success.

The updated business structure will result for some employees in a change of reporting relationship, new job descriptions, and expanded roles and responsibilities.

Unfortunately, as part of the restructuring, the position of Vice President & Executive Editor has been eliminated. This was a very challenging process, and we made every effort to ensure all decisions were made with great care and consideration.

We are extremely grateful for Shelly Bond’s commitment and dedication to Vertigo, its books and its incredibly talented team of staff and creators.

In Vertigo she leaves a legacy to which we remain committed and on which we intend to build for the future. She will always be a deeply valued and respected member of the DC family.

We have the utmost confidence in the current editorial staff and look forward to the team leaving their mark on the Vertigo line knowing this new alignment creates a stronger organization that is well positioned for maximum potential.

Companies change direction and restructure all the time. So, why is this such a big deal?

Well, for one thing, Shelly Bond is a highly-respected member of the comics industry. The fact that she was let go after not even three years in this position, as opposed to choosing to move on after decades of great work was hugely surprising.

And for another thing — and this is less surprising and more upsetting — it boggles the mind that they would let go of someone like Bond, apparently having no use for someone of her talents anywhere at DC (though she was named one of the editorial voices behind Gerard Way’s upcoming Young Animal imprint, she won’t be remaining to work on that either), and yet allegedly they’ll bend over backwards to keep another editor on board despite multiple allegations of sexual harassment, shifting them from department to department so as not to have them have to go without a job. TMS’ Marcy Cook wrote an excellent piece about the sexual harassment endemic in the comics industry that shows just how deep the problem goes. in the It’s not just upsetting, it’s infuriating.

But, as LeVar Burton said on Reading Rainbow, you don’t have to take my word for it. Comics journalists, prompted by the removal of someone so beloved from DC, are speaking out about the discrepancies in DC Comics’ hiring and firing practices. Comics journalist and publisher Janelle Asselin took to Twitter late last night when she heard the news, and was absolutely not having it. She talked about her first-hand experience with the company:

It’s late and I’m out of fucks, so yes, the fact that DC can find reason to fire Shelly Bond and reason to keep Berganza employed is trash.

I’m done having so much of my life focused around shithead sexual harassers in comics, so this is about all I’m going to say about that.

Yes, I was one of many who reported Eddie Berganza’s behavior in 2011. I left DC because they promoted him anyway.

I have friends with PTSD from Berganza and people like him. But yes, let’s fire the Shellys of the world.

But beyond DC firing Shelly, they have driven out so many women who would have stayed without Eddie there. So. They’ve made their bed.

I misspoke last night. The sexual harassment claim against Berganza I was involved with was in 2010. I left in 2011. Time flies, I guess

Asselin also retweeted Panels’ Jess Plummer, who made an excellent point about the fact that DC’s apparent policy for handling Berganza has been to keep women from his office. Because you can’t get harassed if you’re not there, right? *sigh* Anyway, Plummer has this reminder:

Casual reminder that a policy of not hiring women in a particular office/dept is actually illegal. You know. Just putting that out there.

Comics journalist Nick Hanover also spoke out, as well as supported Asselin’s statements via retweet, in the interest of shining a light on the hypocrisies in the comics industry. He tweeted:

Eddie Berganza continues to survive restructuring at DC (except restructuring that put him in all male quarantine) https://t.co/0zAMIsFNm1

I see a lot of people talking about DC’s resident serial harasser and I think collectively we just need to be saying Eddie Berganza.

If enough of us who know this open secret continuously say in public that Eddie Berganza is a serial harasser, it will be harder to shush.

It’s not even something DC staff keep very quiet about. Editors there will openly tell you about Eddie Berganza harassment when asked.

One DC editor told me during an interview “Everything you’ve heard about Eddie Berganza is probably true, or maybe worse.”

Eddie Berganza isn’t an anonymous man. He’s upper management at one of comics’ biggest publishers and uses his position to harass women.

“But guys, that predator hasn’t committed any new crimes we know of so it’s okay that he saw no real repercussions”
This is a garbage look

If Eddie Berganza hasn’t had any new complaints filed against him, maybe that’s because DC did such a good job handling the previous ones?

As I mentioned in my piece on the Big Two’s gender representation, DC has fewer female comics creators that Marvel. Now, in one of the few areas where they were doing better, number of female editors, they now have one less. It’s as if they’re determined to be as inhospitable to women as humanly possible, because you don’t get this bad without trying.

I have no idea what the future of Vertigo holds. DC’s statement says that they “remain committed” to Bond’s legacy, but I find that hard to believe when they’re clearly making a decision solely based on business (they continually use phrases like “set the business up for future success,” “updated business structure,” and “stronger organization that is well positioned for maximum potential.”) rather than on the quality of the product they’re churning out.

The fact that they’re eliminating a female editor from a prominent position at one of their imprints while handing a rock-star-turned-comics-writer (talented though he is) his very own imprint to play with isn’t lost on me either.

What this all boils down to is that DC Comics seems to be going out of their way to alienate people like me. Now there are still some wonderful female creators and professionals at DC whose work I will continue to support, because I want to see them thrive. However, the more of these women get brushed aside or let go, the less reason I have to read DC titles.

*We’ve also reached out to Shelly Bond for a statement, and will update this piece as needed.