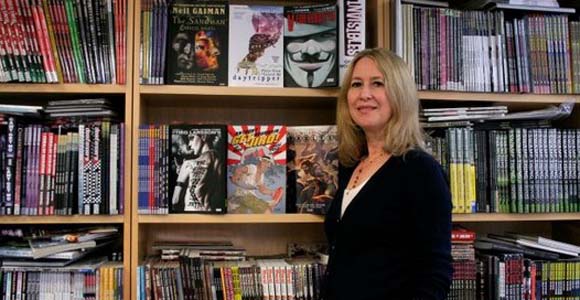 In December 2012, when the legendary Executive Editor of Vertigo, Karen Berger, left DC Entertainment after nearly 30 years, the comics industry paid collective tribute to her massive influence on the medium and the loss that her departure represented. Now, there’s cause for rejoicing! Berger will operate her own imprint at Dark Horse Comics, Berger Books, where she will “acquire, edit and oversee” creator-owned comics and graphic novels.

It looks like Chip Zdarsky almost got his wish:

I hope Karen Berger starts her own imprint called Bertigo

Over her long career at DC and Vertigo, Berger nurtured the craft and careers of a number of innovative comics creators, including Neil Gaiman and Grant Morrison. She edited and advocated for a pretty astounding stable of critically and popularly acclaimed works, including Alan Moore’s run on Swamp Thing, The Sandman, V for Vendetta, Hellblazer, Preacher, Y: The Last Man, and Fables.

“I’m very fired up about being back in the game in a big way, and to be producing this new line with top, diverse creative talent and exciting, original new voices.”

When she announced her departure from DC Entertainment, Berger simply said she wanted a “professional change”: “It’s time to ply my storytelling skills elsewhere.” She didn’t cite any major dissatisfaction or creative conflicts. However, in a 2013 interview with The New York Times, she said, “I’ve found that they’re really more focused on the company-owned characters…[DC and Marvel] are superhero companies owned by movie studios.” Perhaps she’s moved to Dark Horse in part because the company isn’t as invested in film and TV properties.

In its editorial offices, comics remains a heavily male industry, so it’s exciting to see that an important voice like Berger’s will be back in the business and making decisions about which creators to publish and promote. I look forward to seeing some weird, wonderful stories from Berger Books.

(Via Publishers Weekly, The New York Times; image via Vertigo)