Then make sure to stay away from tiger sharks when you're in full out dogfish gear. 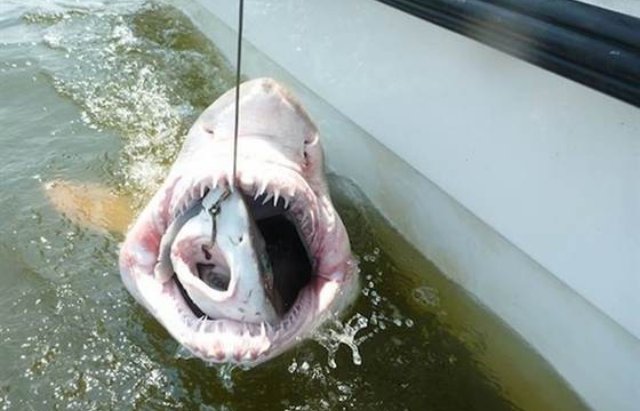 When the Ocean Exploration, Remote Sensing, Biogeography lab team of the University of Delaware went out to remove tags from tiger sharks off the Delaware Bay, they found that one of those tiger sharks had eaten a dogfish, leading to the fairly disgusting image you see above.

The goal was not actually to create the most terrifying version of turducken ever, but rather to recapture sharks that had been previously tagged in order to study the species’ assembly patterns. And don’t worry about the cute little sand tiger shark– it was tagged and released.

Though Shark Week may be over, it’s never a bad time to learn some shark facts. So in that vein, here’s some information from the ORB lab:

Sand Tiger sharks are sometimes called raggedtooth sharks. Can you see why? Their teeth make them look much more vicious than they actually are. In fact, their protruding spike-like teeth are perfect for spearing their favorite foods: bony fishes, small sharks, rays, squids, crabs, and lobsters.

Sand tiger’s lose an average of one tooth a day and have about 56 rows of teeth in each jaw at any time waiting to replace lost or broken teeth. The rows of teeth replenish themselves sort of like a vending machine—when one falls out, the one behind it shifts forward.

I wonder if there is a shark tooth fairy?

(ORB Lab via Mediaite, image via University of Delaware)